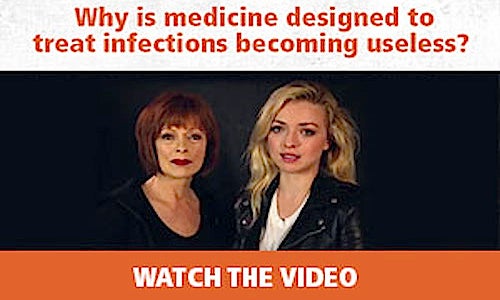 According to Food & Water Watch, an estimated 80 percent of antibiotics sold in the U.S. are used in the agricultural sector and most of them are routinely fed to animals to make them grow faster, leading to the creation of antibiotic-resistant bacteria. The Food and Drug Administration has known about the problem of antibiotics misuse since at least 1977, but has not required factory farms to stop this dangerous practice.

The public service announcement features the following quotes from celebrities:

All celebrities in the video are board members of the Environmental Media Association.

“Powerful industries are using their political power to weaken any attempt at regulation, despite scientific evidence that factory farms are contributing to the ineffectiveness of antibiotics,” said Food & Water Watch Executive Director Wenonah Hauter. “Factory farms aren’t just dirty—they are literally a public health hazard, and we need legislation to protect these lifesaving medicines for the rest of us.”