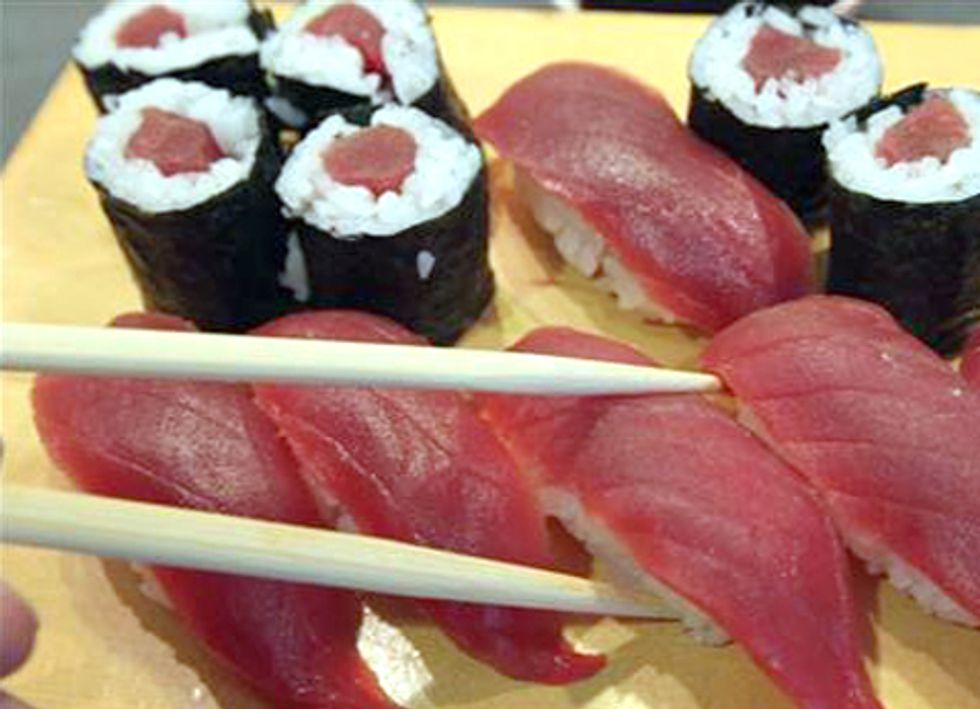 We all knew it was coming.

Radioactive tuna has been caught off the coast of California. The fingerprint of cesium 137 is unmistakably from the exploded reactors at Fukushima.

But Fukushima's hot hands are also on a very welcome debate still stalemating China's plans to build more than 30 new reactors. Fierce No Nukes opposition continues to escalate in India. Reactor cancellations have spread throughout Europe.

And now we have a chance to stop new reactor construction in the U.S. Reliable reports now confirm that the $8.33 billion loan guarantee for Georgia's Vogtle double-reactor project has still not been finalized. After just five months construction is $1 billion over budget and falling ever further behind schedule. There is no firm price tag. Substandard concrete and rebar steel that doesn't meet official specifications are just the beginning of the nightmare.

You can help Georgia ratepayers and American taxpayers out of this misery by signing our petition.

You can also prepare for life without sushi. National Public Radio has assured us all that the radioactive tuna are perfectly safe to eat. This is the same network whose Scott Simon glibly told us that there were no injuries at Three Mile Island, "not even a sprained ankle."

But as long-time radiation expert Robert Alavarez warns, "it's not harmless." Fukushima released far more cesium-137 than the bombings of Hiroshima and Nagasaki. Many decades ago lesser fallout from nuclear testing forced the confiscation of more than 4 million pounds of fish.

But as the really bad news from Fukushima continues to escalate, we must begin to adjust to far worse than giving up raw fish.

Massive quantities of Japanese trash have begun to wash up on the west coast of North America, from Alaska to California and beyond. The tragic residue of the earthquake and tsunami that killed thousands and cost trillions has crossed the Pacific. The waves of debris include at least one "ghost ship," many motor vehicles, thousands of barrels full of unknown substances and much more.

Much of it is radioactive. Government officials, the nuclear industry and corporate media will lowball the readings and scoff at the health implications. But American beaches are now contaminated, the fish you once ate is unsafe and the situation could get much worse.

Still hovering 100 feet in the air is the spent fuel pool at Fukushima #4. Stacked with thousands of tons of the most lethal substances ever created, the fuel rods could come crashing to the ground with the next big earthquake. Strewn at random, with no cooling water, exposed to the air, the radiation releases would far exceed Chernobyl, the nuclear bomb tests and any other polluting fallout humankind has yet created. That it would go global is a given.

Repeated calls for help from international teams of experts underline the core reality that nobody really knows what to do, except to pray for seismic stability... an impossible dream in Japan, but at this point the only port of last resort.

Thankfully, the doubts instilled by Fukushima and the growing power of the global No Nukes movement have had their impact. Reports from China indicate deep divisions about further reactor construction.

In the meantime we Americans can finally kill the prospect of federal loan guarantees for building new reactors here.

As Mary Olson of the Nuclear Information & Resource Service has pointed out, money for new nukes—which can't get private financing—was set aside early in the George W. Bush administration. But in large part as a result of the power of the grassroots No Nukes movement, not a single guarantee has yet been finalized.

Vogtle is the first project officially designated. But problems with design, planning and execution continue to escalate. So have the rate hikes imposed on Georgia consumers. With no firm price tag or completion date, and with the entire industry in chaos, the Office of Management and Budget has been unable to set reasonable terms that the reactor builders can meet.

It all adds up to an industry in accelerating collapse. Reactor construction at South Carolina's V.C. Summer is also over budget, behind schedule and at the core of massive rate hike fights in both Carolinas.

Reactors proposed for Florida's Levy County have soared over a minimum of $9.5 billion to as high as $12 billion each, and still climbing—far in excess of original estimates. Shutdowns continue at nearby Crystal River, California's San Onofre, the flooded Calhoun in Nebraska and many others. Public pressure to forever close Vermont Yankee, New York's Indian Point, Ohio's Davis-Besse, South Texas and more continues to escalate.

Whether these shut-down movements succeed before a Fukushima happens here, or that spent fuel pool collapses, or Vogtle again escalates in price, remains to be seen.

What's certain is that you can help stop the Vogtle loan guarantee and kill the chance of any new reactors being built here—paving the path at last for a totally green-powered Solartopian Earth.

So next time you start to reach for some sushi, grab a pen or keyboard instead. Sign the petitions, call your representative, run a bake sale—do whatever is needed to kill this loan guarantee and lessen the odds on being harmed by a Fukushima here at home.