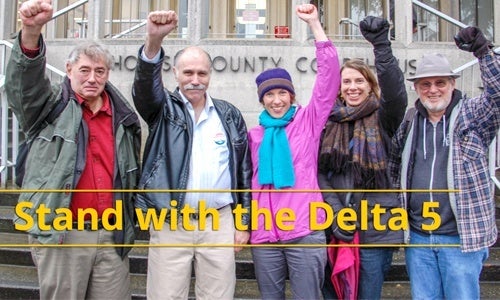 History will be made later today in an unassuming grey court room in Snohomish county in Washington State, when five activists—known as the Delta 5—who blocked an explosive crude by rail train last year, will argue that their actions were justified by the threat of climate change.

It is the first time ever that a U.S. court has allowed defendants to use the “necessity defense” in a case relating to climate action. 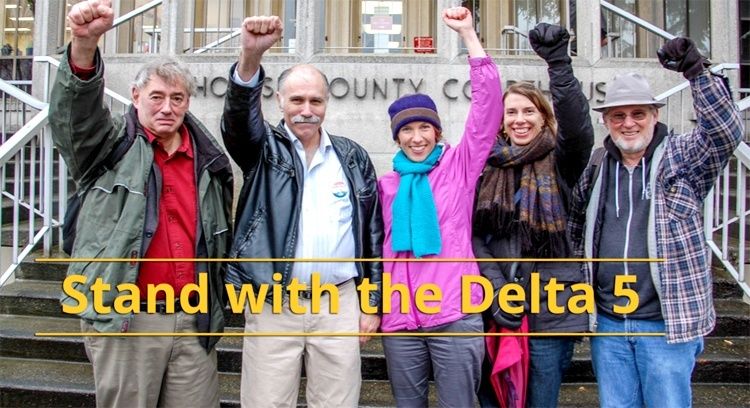 The five—Patrick Mazza, Abby Brockway, Mike Lapointe, Jackie Minchew and Liz Spoerri—managed to stop the train for eight hours. They were eventually released and charged with “criminal trespass” and blocking a train.

Later today the five plan to use the “necessity defense” to defend their action regarding climate change. The defense argues that violation of the law by stopping the crude by rail train was justified because it was done to “avoid a harm which social policy deems greater than the harm resulting from violation of law.”

One of the five, Patrick Mazza, has been working since the late eighties to advance solutions to the climate crisis. He has worked with power grid experts building smart grids to power electric vehicles, solar panels and wind turbines. He has worked with electric vehicle companies and to promote sustainable fuels. “I continue to work on practical solutions. I won’t quit,” he said, but he still felt that he had to do more to protect the climate.

“I sat on the tracks because our world is going off the rails,” he said, “I have spent a lot of time sitting in front of a computer trying to stop global warming. But after many years of seeing the climate crisis only worsen, it was time to sit in front of a train.”

“At the same time,” Mazza adds, “the political system is blocked from responding in any meaningful way. Oil and coal companies have knowingly deceived the public about the magnitude of the climate threat and bought the politicians to stop action.”

Abby Brockway, another of the Delta 5 adds what led her to take action too. “I met a lot of politicians along the way but each individual said ‘I hear what you are saying but there is nothing that I can do. I feel powerless as your representative.’ I can’t accept that,” she said.

The third of the five to put her body on the line for the climate that day was Liz Spoerri. “It was clear that the political reality is not keeping up with the physical reality and that citizens need to lead,” she explained. “Choosing to act to block an oil train in Everett for me was conservative, logical, hopeful.

“Conservative because I want to protect the earth and its inhabitants. It’s a responsibility. Logical, because we have a narrow window of opportunity to prevent extreme climate chaos. We have solutions but we are not acting fast enough. We don’t have to build terminals and then turn a blind eye to the consequences. Hopeful because we can do so much better. If we reorient ourselves to prevent climate chaos we can address so many other problems at the same time.”

In their defense the Delta 5 will call expert witnesses including Dr. Richard Gammon Professor (Emeritus) of Chemistry and Oceanography and Adjunct Professor (Emeritus) of Atmospheric Sciences at the University of Washington. Gammon was a co-author of the first Scientific Assessment by the Intergovernmental Panel on Climate Change in 1990.

The day before Patrick Mazza spent eight hours blocking the rails, it was his daughter’s 18th birthday. “There is hope for her world and that of all our children, but not if we stay within the bounds of a blocked and bought-off political system,” he argues.

He said he is “done with lies and compromises that leave our world rapidly careening toward a global climate train wreck. I have to take direct action, to put my body in the way of business as usual and say it is unacceptable to leave the world a wreckage for our children. I hope many of the people with whom I have worked on solutions over the years will join me. We owe our children’s generation nothing less.”

Donald Trump Slapped With Fine for Pollution From His Private Jet