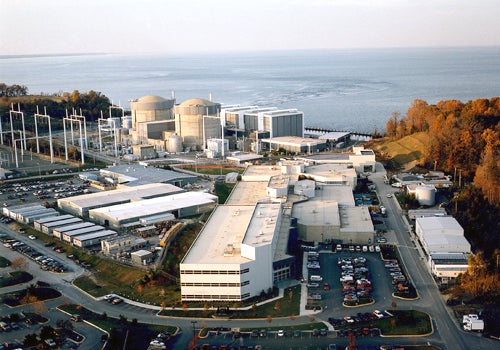 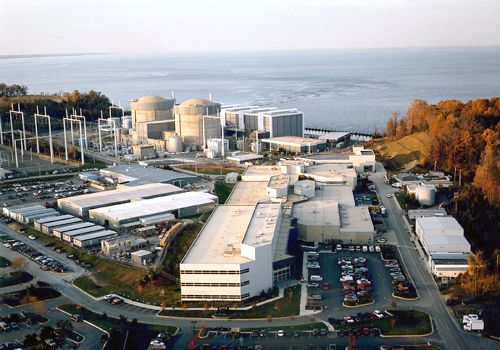 Calvert Cliffs nuclear power plant on the Chesapeake Bay in Lusby. Photo by NRCGov on Flickr

A three judge Nuclear Regulatory Commission (NRC) Atomic Safety and Licensing Board (ASLB) today denied a license for the proposed Calvert Cliffs-3 nuclear reactor on the Chesapeake Bay in Maryland.

In a 29-page decision, the ASLB agreed with intervenors that the Calvert Cliffs-3 project would be in violation of the Atomic Energy Act’s prohibition against foreign ownership, control or domination, and that the project’s owner, UniStar Nuclear, is eligible neither to receive a license nor to even apply for a license. UniStar is 100 percent owned by the French government’s Electricite de France (EDF).

“For the aforementioned reasons, the Board grants summary disposition in favor of Joint Intervenors as to Contention 1 and finds Applicants currently ineligible to apply for or obtain a license. The license cannot be granted as long as the current ownership arrangement is in effect,” said the ASLB.

This is only the second time in history a reactor license has been denied by an Atomic Safety and Licensing Board. The first was the license application for the Byron reactor in Illinois in 1984, which was briefly denied because of quality assurance problems at the site. But that decision was quickly overturned on appeal as the utility already had initiated a program to correct the problems.

In this case, the ASLB is giving UniStar 60 more days to find a U.S. partner that might enable it to meet the foreign ownership restrictions before the ASLB declares the proceeding concluded. The decision noted that UniStar already has had nearly two years since it became solely owned by EDF to find a partner, and has not shown any progress toward that. UniStar can appeal this decision to the NRC Commissioners.

“This is a great day for Maryland,” said Michael Mariotte, executive director of Nuclear Information and Resource Service (NIRS), which first filed the contention on foreign ownership in November 2008 and has been the pro se intervenor on the issue ever since. “Marylanders need not fear another dangerous nuclear reactor in our state, nor the accumulation of still more lethal radioactive waste on the shores of the Chesapeake Bay.”

Mariotte added, “But this is also a blow to the so-called ‘nuclear renaissance.’ In the summer of 2007, Calvert Cliffs-3 became the first new reactor project to submit even a partial application in about 30 years. It was the flagship of the nuclear renaissance and now it is a symbol of the deservedly failed revival of nuclear power in the U.S. That UniStar has been unable to find a single U.S. utility to partner with it in this extraordinarily expensive project speaks volumes about the lack of genuine interest in new nuclear reactors in the U.S.”

Originally, UniStar Nuclear was composed of EDF and the Maryland-based Constellation Energy. Even then, NIRS argued the corporate structure was dominated by EDF and the French government—that was when our contention was filed. But Constellation dropped out of the project and sold its share to EDF in October 2010, after turning down an offered taxpayer loan guarantee from the Department of Energy.

The original intervention in the Calvert Cliffs-3 licensing in November 2009 was undertaken by NIRS, Public Citizen, Beyond Nuclear and Southern Maryland CARES. NIRS was the lead intervenor on the foreign ownership issue and on a separate contention also decided today. That contention argued that the Environmental Impact Statement for the project understated the potential contribution of solar and wind power as alternatives to Calvert Cliffs-3. In a lengthy and complicated decision, the ASLB ruled that the contention was correct when it was filed, but that the NRC already has taken sufficient steps to address the deficiencies.

The ASLB today also declined to admit a separate new contention, filed in numerous licensing cases, based on findings of the NRC’s Fukushima Task Force and its potential implications for U.S. reactors.

A copy of the decision is here: http://www.nirs.org/nukerelapse/calvert/contention1decision.pdf

A copy of the decision on the solar and wind contention (Contention 10C) is here: http://www.nirs.org/nukerelapse/calvert/10cruling.pdf

A copy of the decision on the Fukushima Task Force contention (Contention 11) is here: http://www.nirs.org/nukerelapse/calvert/cont11ruling.pdf

On July 26, 2012, NIRS held a press briefing to discuss the upcoming ASLB decision and its implications for Calvert Cliffs and the nuclear industry generally. That briefing can be heard here: http://www.hastingsgroupmedia.com/NIRS/072612CalvertCliffsDecisionImplicationstelenewsevent.mp3

Statement of Michael Mariotte, executive director of NIRS, at the July 22, 2012 briefing is here: http://www.nirs.org/nukerelapse/calvert/CC3briefingstatement72612.pdf

A timeline of the Calvert Cliffs case is here: http://www.nirs.org/nukerelapse/calvert/cc3timeline.pdf