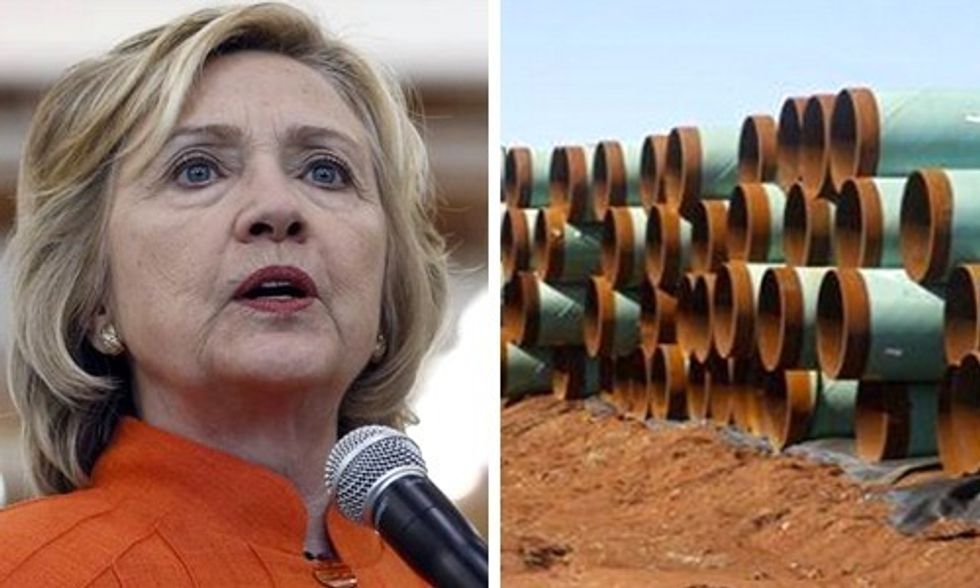 Hillary Clinton's pipeline problem started in earnest this July 28, when Bruce Blodgett, a retired software engineer, asked Clinton about her position on Keystone XL during a town hall forum in Nashua, New Hampshire. The video of Clinton's response is painful to watch, in part because it's so emblematic of the cautiousness and doublespeak that even her supporters wish their candidate would move away from.

Hilary Clinton will need to talk seriously about environmental justice and the impacts that projects like Keystone XL and the climate impacts they cause, have on vulnerable communities.

"I am not going to second guess [President Barack Obama] because I was in a position to set this in motion," Clinton said, referencing the pipeline review process that she oversaw as Secretary of State. "I want to wait and see what he and Secretary Kerry decide."

She then followed up with what might be one of the worst rejoinders ever delivered from the campaign trail, "If it is undecided when I become president, I will answer your question." Translation: vote for me and then I'll tell you what I stand for. It's the sort of answer that subverts the entire idea of having an election in the first place.

Within a few hours, a video of the fumble was plastered across nearly every major news site in the country. Politico called the answer a "dodge," while the Times said that Clinton seemed "stumped," and the Washington Post labeled the whole thing a "ridiculous hedge." Clinton's opponents also jumped all over the misstep. "Well, listen, needless to say, I have a hard time understanding that response," Bernie Sanders told ABC. "I have helped lead the effort against the Keystone pipeline."

Clinton, on the other hand, has done rather the opposite. Back in 2010, before the pipeline had even gone through an initial review process at the State Department, Clinton said she was "inclined to approve" the project. The process she then oversaw was so riddled with controversy and incompetence that the State Department was forced to go back to the drawing board multiple times, while their own inspector general investigated the department over serious conflict of interest allegations.

Other allegations centered around Hillary Clinton herself. One of Clinton's 2008 deputy campaign managers, Paul Elliot, went on to become a lead lobbyist for TransCanada, the company looking to build Keystone XL. For her 2016 campaign, Clinton has hired a another lobbyist, Jeffrey Berman, whose firm received $120,000 to lobby the State Department for the Keystone XL's approval. Meanwhile, the Clinton Foundation has received millions of dollars in donations from ExxonMobil, who stands to profit handsomely from the expansion of the Canadian tar sands, as well as donations from Canada's Foreign Affairs, Trade and Management agency, which supports the pipeline.

All these swirling connections only reinforce the perception created by the controversy over Clinton's deleted State Department emails: she's crooked, compromised and has something to hide. A pipeline approval would cement that reputation. As Clinton said herself, she set this whole crazy, mismanaged review process in motion. If Keystone XL goes forward, it won't just ruin President Obama's climate legacy: it will take out Clinton's as well.

Which isn't to say that Clinton's record on climate is much to begin with. During her tenure as Secretary of State, Clinton oversaw the U.S. involvement in the failure of the 2009 Copenhagen climate talks. As Mother Jones documented, Clinton's State Department went on to sell fracking around the world, muscling weaker nations into expanding oil and gas development. All of which has been adding up to headlines like this one: "Why Environmentalists Are Anxious About Hillary Clinton."

Clinton seems to know that she has a climate credibility gap and understands that she's in a bind on Keystone XL. And her campaign must recognize that's going to be a problem when it comes to reaching out to the voters she needs to win a Democratic primary and carry her through the general election. Those dual realizations have led to some interesting maneuvering as of late.

Earlier this week, the Associated Press reported that Clinton was seeking to make up lost ground on climate issues. On Tuesday, she came out against Arctic drilling, tweeting:

The Arctic is a unique treasure. Given what we know, it's not worth the risk of drilling. -H

That's a significant move. Scientists have made it clear that in order to keep global warming below 2°C we must keep 100 percent of Arctic oil in the ground: there's simply no room in the atmosphere for setting off that carbon bomb. Yet the oil industry and Shell in particular, have turned the Arctic into their Holy Grail (an oil filled one, that is). Standing up the industry and saying no is something the Obama administration has so far failed to do. Clinton's stance is a big improvement.

But that still leaves the question of Keystone XL. In a follow up question on the pipeline, Clinton said that she "would really hope" a decision on the pipeline comes soon. "But I am getting impatient," she continued, "because I feel that at some point a decision needs to be made. And I'm not comfortable saying, you know, I have to keep my opinion to myself' given the fact that I was involved in it. So at some point I may change my view on that."

That change in view would be welcomed by Keystone XL opponents, as it should be by Clinton supporters. Just because the pipeline has mostly been a problem for Clinton doesn't mean that it can't now become an opportunity. While a Keystone XL approval would sink her ability to reach out environmental voters, progressives and young people—all of whom have opposed Keystone XL in the hundreds of thousands—a muscular rejection would provide Clinton with an opening.

To take advantage of it, she'll have to do more than waffle back and forth about an "all of the above" energy strategy or just wave around razzmatazz proposals like "500 million solar panels." She'll need to join candidates like Bernie Sanders and Martin O'Malley by coming out for a full transition away from fossil fuels and towards 100 percent renewable energy. She'll need to talk seriously about environmental justice and the impacts that projects like Keystone XL and the climate impacts they cause, have on vulnerable communities. And she'll need to say that this pipeline is just a start: as President, she'll work to find more ways to stand up to Big Oil and keep fossil fuels in the ground.

Let's hope the next time Hillary Clinton gets a question about Keystone XL she's prepared with the right answer: "I would reject it ... and that would be just the beginning."