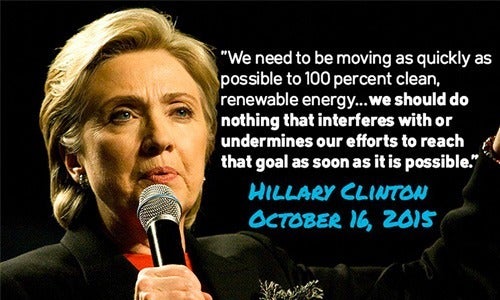 “Clinton said that she doesn’t think there are a lot of people who support her who have ties to fossil fuels, but as it turns out, nearly every one of her top bundlers are connected with the industry in some way. That raises some serious concerns,” said Yong Jung Cho, Campaign Coordinator with 350 Action. “Clinton will have to continue to demonstrate a firmer commitment to keep fossil fuels in the ground if she wants to win over the trust of people who are concerned that the likes of ExxonMobil still have a stranglehold on our government.”

Thanks to a people-powered movement, @HillaryClinton calls for a 100% clean energy future. Next? #keepitintheground pic.twitter.com/vneLOV5Vks

An analysis by the Huffington Post concluded that nearly all of Clinton’s top bundlers have ties with the fossil fuel industry. They include the likes of ExxonMobil executive Theresa Mary Fariello, who raised $21,200 for the Clinton campaign and Gordon Giffin, a former lobbyist for TransCanada, the company who tried to build Keystone XL, who has raised more than $100,000. Meanwhile, the Clinton Global Initiative has accepted millions of dollars from major fossil fuel companies like Exxon and Chevron, along with Saudi Arabia, the world’s largest oil exporter.

Hillary Clinton: Well, I don’t know that I ever have. I’m not exactly one of their favorites.

Clinton: I’ll check on that. They certainly haven’t made much of an impression on me if I didn’t even know it. Look, I am committed to moving away from fossil fuels toward clean, renewable energy … I just told an interviewer that I was doing a phone interview with in South Carolina, I am not in favor of drilling off of our coasts. I was out there first, before even the President, saying no drilling the Arctic…

Clinton: Individuals who might have some connection to whatever industry, I’m not going to do a litmus test on them. I don’t think that there’s a lot who support me, but the companies don’t, because they know I’m going to be very adamant about moving us towards clean renewable energy and I think that’s the way it should be. They should know where we’re going and how I’m going to try and get you there.

I’ll take a look at what I’ve already gotten and obviously I will do everything I can to know that everyone who gives me money knows exactly what I’m going to do when I am elected, there’s no doubt about that.

Patterson: So, you will commit to not, if you are getting their money, to stop taking it?

Clinton: Well, I’m going to take a look and see … I mean, you’re asking me a question I never pay any attention to because they don’t actually come and talk to me. I think they think I’m a lost cause.

350 Action is working in primary states to urge candidates for president to take bold action on climate change by pledging to keep fossil fuels in the ground and support a just transition to a 100 percent renewable energy.

Leonardo DiCaprio Is at It Again, Invests in Energy Technology Company Zuli