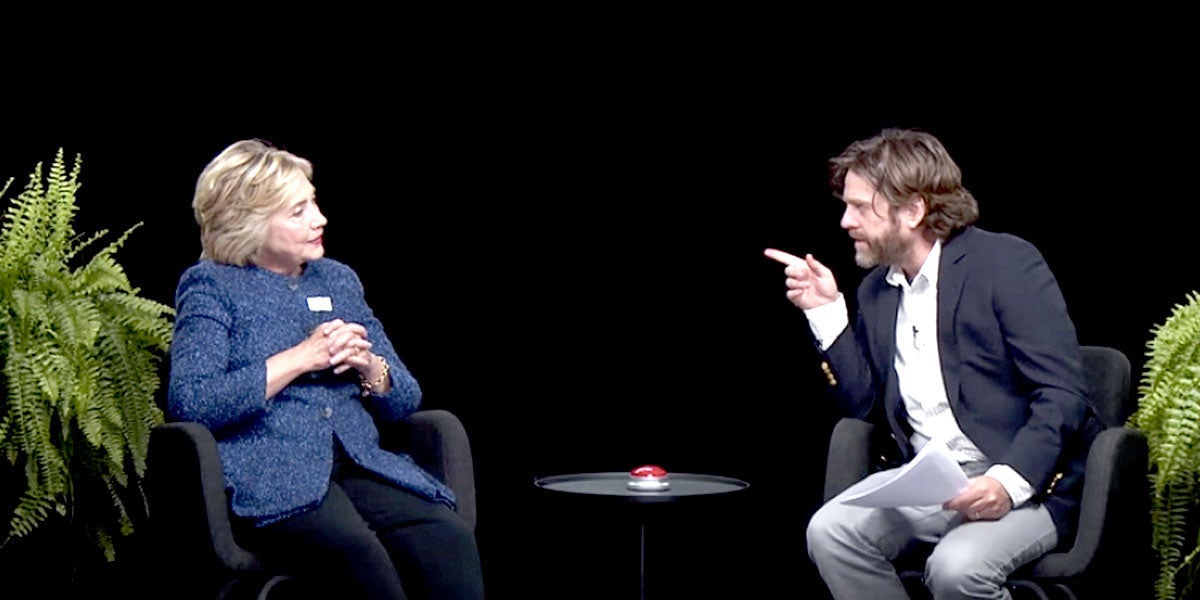 Hillary Clinton sits down for an interview with Zach Galifianakis on his web comedy series, Between Two Ferns. Funny or Die / YouTube

In the latest episode of Zach Galifianakis’ web comedy series, the comedian and star of The Hangover trilogy invited Democratic presidential nominee Hillary Clinton to sit Between Two Ferns to answer some questions no one else would dare ask her on camera.

The show is anything but serious and gave Clinton the opportunity to showcase a playful side to her personality.

However, one important question that did come up was whether or not Clinton was “down with the TPP“—to which she replied she is “not down” with President Obama’s Trans-Pacific Partnership (TPP) deal.

Clearly missing—or opting not to play into—the Naughty by Nature reference, after a long pause Galifianakis corrected her by saying, “No, you’re supposed to say, ‘Yeah, you know me.'”

“Don’t tell me what to say,” she responded deadpan.

Clinton supported the deal as secretary of state claiming that she hoped it would “create a new high standard for multilateral free trade,” but her views started to shift after meeting with labor unions.

She took a hard stance on the deal in a February debate on MSNBC saying she opposed it because the finalized version did not meet the standards she had hoped for.

“I have a very clear view,” Clinton said in the debate. “We have to trade with the rest of the world. We are 5 percent of the world’s population. We have to trade with the other 95 percent. And trade has to be reciprocal. That’s the way the global economy works. But we have failed to provide the basic safety net support that American workers need in order to be able to compete and win in the global economy.”

Back in June, 40 environmental groups signed a letter urging Congress to reject the TPP arguing that if the TPP and its European counterpart, the Transatlantic Trade and Investment Partnership, were both enacted, it would radically expand the power of fossil fuel companies to sue the U.S. for laws and regulations that hurt their expected future profits. Everything from local fracking bans to renewable energy mandates could be litigated in trade tribunals run overwhelmingly by corporate lawyers.

Galifianakis ended the interview with the perfectly delivered question:

“Well, this has been a lot of fun Mrs. Clinton. We should stay in touch. What’s the best way to reach you? Email?”