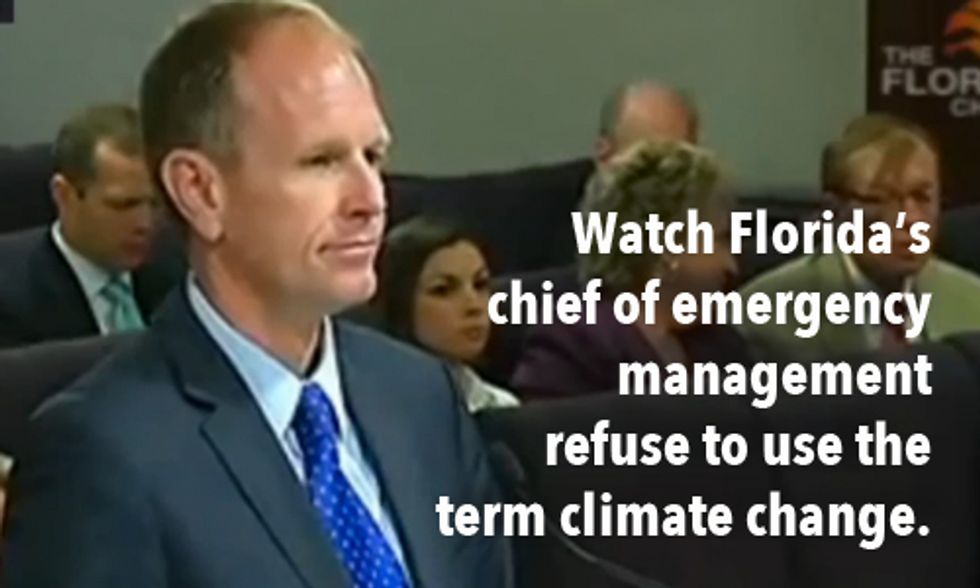 The saga of Florida's ban of the "C-words" climate change is just getting ridiculous. "Even as Florida Governor Rick Scott denies reports of an unwritten policy banning administration officials from using the term 'climate change,' an employee of the Florida Department of Environmental Protection says he was suspended for expressing his views on climate change," reports MSNBC's Chris Hayes. The Florida official, Bart Bibler, joins Hayes on his show All In With Chris Hayes to tell his story.

Also included in the segment, Gov. Rick Scott’s chief of emergency management, Bryan Koon, testified before the state legislature and refused to say the "C-words" during a state Senate hearing last week. State Sen. Jeff Clemens (D) asked Koon about FEMA requirements, which mandate that states have a “climate change plan” in order to receive preparedness dollars—a totally reasonable thing to talk about with the state's chief of emergency management given the expected impacts on Florida from climate change. The interaction at the Senate hearing is a bit like watching the older kid trying to get the younger kid to say a bad word. Watch as lawmakers and the audience actually laugh out loud at the Scott administration official who just refuses to say that naughty term: