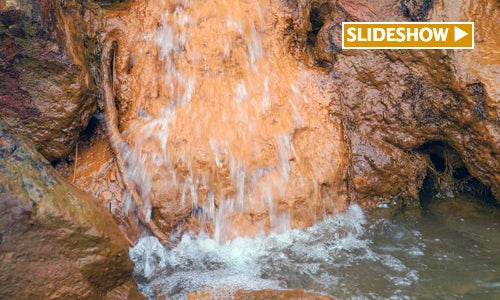 [This is the fourth article in a four-part series. Read part one, read part two, read part three.]

Waterkeeper Alliance and Yadkin Riverkeeper have obtained the results from a second round of water sampling on the Dan River in the wake of the third largest coal ash spill in recent U.S. history. Their results confirm that highly-contaminated coal ash seepage is still pouring out of the same Duke Energy ash impoundment where an estimated tens of thousands of tons of raw ash erupted into the river last week. The newly-confirmed leak is located about a third of a mile upstream of the pipe where last week’s major spill occurred.

Laboratory analysis of the discharge (visible on this map at point “D”) confirmed that it contains multiple pollutants that are characteristic of coal ash, including the toxic heavy metals arsenic and chromium. Arsenic concentrations measured .187 mg/L, more than 18 times the human health standard and more than three times the applicable water quality standard.

Meanwhile on Wednesday, Duke Energy began vacuuming ash from last week’s spill out of the river, and pumping it back into the leaking impoundment.

On Thursday, Feb. 6, Waterkeeper Alliance attorney Pete Harrison patrolled the spill site and noticed an unusual discharge flowing down an embankment at the southwest corner of of the plant’s coal ash impoundment.

“This area caught my attention because the rocks were stained bright orange and there was water cascading down, right into the river,” Harrison said.

“When I paddled closer, I could see that the rocks had a thick, slimy coating, an indication of iron-oxidizing bacteria that is often present where seepage is bleeding out of coal ash pits.”

Harrison added, “The discharge concerned me because I’d reviewed the discharge permit for this facility and I knew that there wasn’t supposed to be anything coming out of the ash pond right there.” His team returned to the area four more times since last Thursday to see if anyone had attempted to stop it, but the discharge was still flowing unabated each time they went.

On Feb. 11, officials from the U.S. Environmental Protection Agency (EPA) and North Carolina Department of Environment and Natural Resources (DENR) denied knowledge of any ongoing leaks when questioned about the newly-discovered discharge at a public meeting in Danville, VA. The officials, however, did not ask for additional details about the location or character of the seepage. Waterkeeper Alliance says it would provide its test results to officials working on the cleanup.

Prompted by the threat of enforcement lawsuits by Waterkeeper and several other organizations, DENR filed four lawsuits against Duke Energy in 2013, alleging illegal pollution from leaking ash pits at all 14 of Duke’s coal-fired power plants in North Carolina.

With respect to the Dan River Steam Station, DENR’s Aug. 16, 2013 complaint against Duke alleges that DENR had discovered illegal seeps flowing into the Dan River from “engineered discharges from the toe drains of the ash ponds.” DENR also accused Duke of contaminating groundwater near its ash impoundment with antimony, arsenic, boron, iron, manganese, TDS and sulfate. Six months after filing the suit, DENR has taken no action to force Duke to remedy the problems.

Because DENR’s court papers fail to identify the location of the “engineered discharge” at the Dan River facility, it remains unclear whether the ongoing discharge Waterkeeper identified is the same illegal outfall that DENR identified months ago, or if it is instead another leak in the impoundment that regulators failed to notice.

Water pollution discharges like the one identified by Waterkeeper Alliance are prohibited by the Clean Water Act unless specifically authorized by a discharge permit, and an intentional or even negligent violation of the Act is a federal crime, punishable by imprisonment and/or criminal penalties.

Workers began removing coal ash from the Dan River on Wednesday. Rather than moving the spilled toxic coal ash to a safer, more secure location, Duke simply began to pump the sludge around the failed pipe from the riverbed back into the leaking ash pond from which it came. The confirmation that the same impoundment has been leaking heavily from another area raises questions as to why DENR failed to stop the discharge, or if the agency had overlooked the cascade—even as its staff responded to last week’s spill.

Waterkeeper Alliance Executive Director Marc Yaggi commented, “How can Duke’s cleanup plan possibly work if regulators are turning a blind eye to an ongoing leak like this? While Duke sucks up a small amount of the ash it spilled last week, arsenic and other toxins are still pouring unabated into the Dan River just upstream. If stopping the flow of heavy metals into the Dan River isn’t part of Duke’s cleanup plan, how can the Dan River possibly recover from this travesty?”

Waterkeeper Alliance and other groups have called on the U.S. EPA to take over enforcement efforts from DENR, which has been accused of withholding information about the spill, misinforming the public about contaminant levels in the river, and failing to hold Duke Energy to the same standards as other regulated entities.

Duke Energy is now saying they released 30,000 to 39,000 tons of coal ash and 24 million gallons of polluted coal ash water. Both Duke and DENR have repeatedly been wrong:  (a) they said their coal ash lagoons were safe and stable, not true; (b) they said their stormwater pipe was reinforced concrete, not true; (c) DENR said that the arsenic in the water met human health standards when it was four times the human health levels. Whatever the actual amount, Duke Energy continues to pollute the Dan River due to its reckless way of storing coal ash. Yesterday DHHS advised people not even to touch the water or to eat fish or mussels from the river.

“This administration has allowed Duke Energy to act above the law,” said Yadkin Riverkeeper Dean Naujoks. “As long as we allow Duke to continue storing toxic coal ash in massive, outdated, unlined pits along our drinking water supplies across the state, it’s only a matter of time until the next disaster.”

Donna Lisenby, Global Coal Campaign coordinator for Waterkeeper Alliance, said DENR has also neglected to stop illegal coal ash seepage discharges from Duke’s Riverbend Steam Station. There, toxic seepage flows into Mountain Island Lake about three miles upstream of an intake structure that supplies drinking water to more than 800,000 people in the Charlotte area. “There’s no reason to think that the leaky ash pits at Riverbend aren’t going to fail like Dan River just did. If that one goes, we’re going to have a serious crisis on a scale that would dwarf even the 2008 spill in Kingston.”