Highlights from a Fracking Flyover 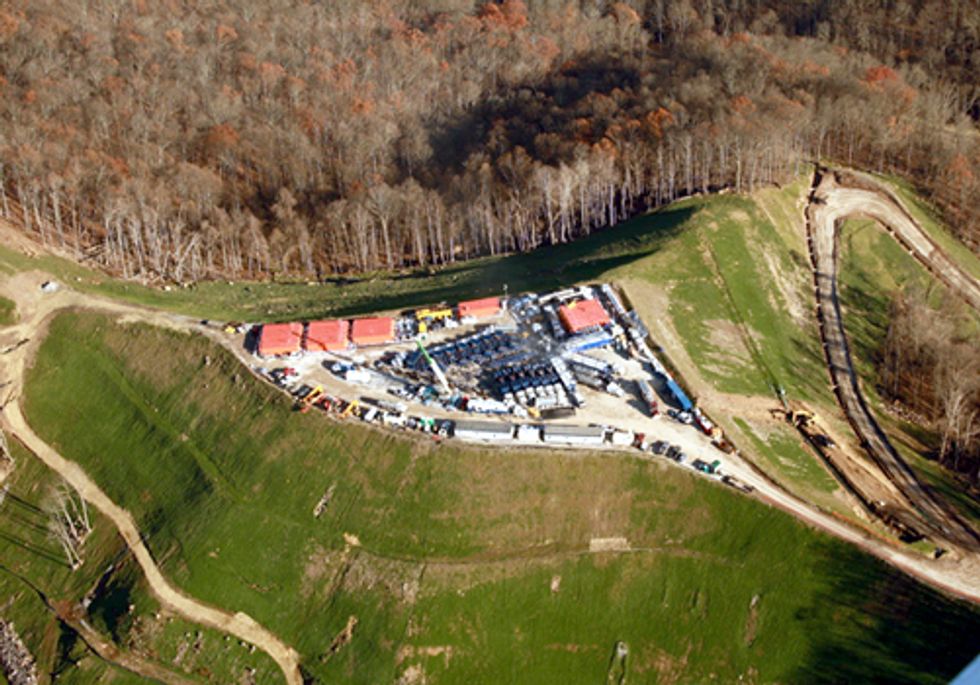 For all that we do working on satellite and aerial images, it's extremely refreshing to actually get a chance to go up in the air ourselves. Last month we had the opportunity when we were asked by the Environmental Defense Fund (EDF) if we could put together an aerial tour of active gas fields. Enabled by our partners at LightHawk, we arranged a flyover of one of the most heavily drilled regions in West Virginia—Wetzel County.

This heat map from the West Virginia Dept. of Environmental Protection-Office of Oil and Gas shows density of Marcellus Shale drilling activity. Due to the profitability of the liquids-rich gas found in NW West Virginia and an energy market flooded with cheap natural gas, this area has become one of the most heavily developed parts of the state.

If Wetzel County sounds familiar, that is because we have posted about drilling in this area before in a guest post by Jim Sheehan, a remote sensing and GIS specialist pursuing his Ph.D. at West Virginia University. We are very interested in areas like Wetzel County because the U.S. is only at the beginning of a resource extraction boom that is promising thousands of wells to be drilled. If this occurs, areas that are now "hot-spots" could become the new norm.

On Nov. 15, John Amos and I headed up to Pittsburgh to guide EDF and representatives from their partner foundations on an aerial tour of active natural gas fields. Since SkyTruth doesn't have our own plane, we coordinated with LightHawk, a volunteer pilot organization that connects pilots with non-profits to promote environmental conservation. They arranged for two single-engine aircraft to fly us on a 160-mile round trip over southwest Pennsylvania, into Wetzel County and back, via the Northern Panhandle of West Virginia.

Our flight-plan, from the Allegheny County Airport (KAGC) in the north, down to Wetzel County, over the Lewis Wetzel Wildlife Management area (in green) and through an area of intense activity know as the Victory Field (in red).

Here are just a few highlights observed during our flyover of one of the most active unconventional gas fields in the region:

There is no need to belabor familiar talking points about fracking, but there is something commonly misrepresented I would like to clear up. Google image search the word "fracking" and you are more likely to see a generic drill rig than an actual hydraulic fracture job underway. Between incorrectly labeled pictures of drill rigs and a wide variety of diagrams, you have to sift through  dozens of pictures before you actually find an image of  an actual frack. Back in October, I posted about visually assessing well sites from aerial survey photos to determine disclosure compliance, and included a detailed breakdown of what a frack-job looks like "in-progress." On the flight, I took some high-resolution photos of a frack underway at Stone Energy Pad #2 in the Lewis Wetzel Wildlife area, a state gameland.

Stone Energy Pad #2, Lewis Wetzel Wildlife Management Area, Wetzel County, WV. All chemicals and water appear to be stored in portable red tanks (instead of open pits) and are mixed with a proppant (usually fine silica sand) and forced down the wellbore by the blue, truck-mounted compressor engines. The Centers for Disease Control and the National Institute for Occupational Safety and Health have issued a warning about the risk of silicosis from this process, but local activists across the Devonian Shale region frequently report that workers rarely use any kind of mask or respirator.

Many of the drill rig crews working in the Marcellus are not from West Virginia or even Appalachia, but from much flatter Oklahoma, Texas, North Dakota, etc. Whether unfamiliarity with steep terrain is the cause or not, Wetzel County has experienced a significant number of "slips," where wellpads, containment ponds and/or roads have become unstable and "slid" downhill. This has resulted in a number of wastewater ponds failing and leaking their toxic contents, blocking roads (even blocking emergency services from responding to a medical emergency).

We flew over numerous sites that have had issues with this public safety hazard, but none stood out as much as the Ray Baker pad in Marshall County.

Citing "imminent danger" to people, the WV DEP shut down this site in December 2011, but the pad has still not been able to resume work. The hillside has continued to slide, shutting down a public road for weeks and forcing a downhill neighbor to relocate due to danger to his home.

Chesapeake Energy has been working since 2011 to stabilize the site after being cited by the Army Corps of Engineers for "discharging pollutants into an adjacent stream." Operators were hoping to be approved to restart work last month, but the most recent slips have left the site's operations suspended indefinitely.

Stay tuned for more highlights or view the whole gallery of photos on Flickr.

You can also view the point-by-point guide we created for the passengers for a more detailed view of all the sites we visited. Many thanks to EDF and LightHawk for making this opportunity possible.