Will High-Speed Rail Ever Get on Track in the U.S.? 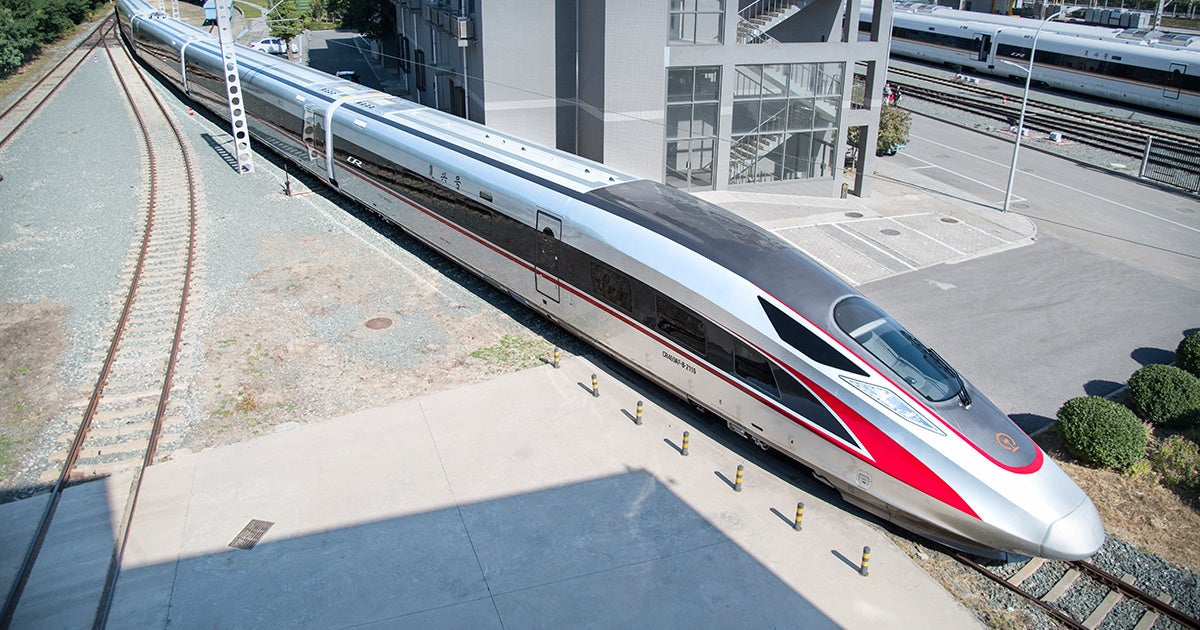 An extended version of the Fuxing bullet train at the China National Railway Test Center on Oct. 15, 2018 in Beijing, China. VCG / VCG via Getty Images

Is it just us?

Other countries don’t seem to have a problem getting their high-speed rail systems on track. This superfast, fuel-efficient form of mass transit is wildly popular throughout Asia and the European Union. Japan’s sleek Shinkansen line, the busiest high-speed rail system in the world, carries an estimated 420,000 riders every weekday. In China, the new Fuxing Hao bullet train now hurries more than 100 million passengers a year between Beijing and Shanghai at a top speed of 218 miles an hour, allowing its riders to make the trip of 775 miles — roughly the distance from New York City to Chicago — in about four and a half hours. Spain, Germany and France together have more than 4,500 miles of track dedicated to high-speed rail, over which more than 150 million passengers travel annually.

But here in the U.S., attempts to implement regional high-speed rail networks have floundered and faltered. The most recent setback was in California, where just last month the state’s new governor, Gavin Newsom, announced that he would be dramatically downsizing an ambitious, exciting system linking the northern and southern portions of the state via a 220-mph bullet train. Cost overruns had more or less doubled the original price tag from roughly billion to billion, with some estimates placing the final bill at nearly 0 billion. As of right now, the previously planned 800-mile line between Los Angeles and San Francisco has dwindled to a .6 billion project across 171 miles between the rural Central Valley cities of Bakersfield and Merced — what cynics have mockingly dubbed a “train to nowhere.”

Meanwhile, in Texas, plans for a bullet train linking the state’s two biggest cities, Dallas and Houston, are going forward — but not without plenty of resistance. Unlike the California project, the Texas Central Railroad’s project, pegged at billion to billion, is being financed entirely with private funds, so no one is complaining about the money. Instead, the complaints come from landowners and other stakeholders upset about the seizure and purchase of privately owned tracts through eminent domain. In late January, a court ruled that Texas Central Railroad, in point of fact, isn’t even a railroad in the legally recognized sense of the word, since it doesn’t currently own anything by way of tracks or rolling stock. As a result, the company’s reliance on eminent domain to obtain land for its future trains’ right-of-way is misplaced — and illegal — according to the judge overseeing the case. (Texas Central Railroad must now face individual landowners in court.)

The friction these projects are encountering can take many forms, but there’s no denying that it’s real: A lot of Americans seem downright resistant to high-speed rail. To some, whatever benefits rail travel may confer to individual riders, cities or the environment can’t ever be enough to offset the massive (and, typically, ballooning) costs to taxpayers during the construction period, which can stretch on for decades. To others, high-speed rail projects — no matter how they’re funded — are little more than land grabs that punish rural communities in pursuit of what many perceive as an urbanist folly.

I can’t help but wonder if behind both sentiments is a latent fear: that this form of mass transit, precisely because it’s so popular in other cultures, somehow poses a threat to our own culture of rugged individualism. The history of American transportation conjures romantic images of the “lone rider” — in the past on horseback, now on a motorcycle or in a car — charting his or her own course out on the open road, free from interference or intervention. This notion often gets compressed into a shrugged assertion: Mass transit is a nice idea, but let’s face it: America is a car culture. As a people, we just like to drive. We don’t like to be driven.

Actually, if this was ever true, the data suggest it is less true now. Millennials, especially, are rejecting the romanticization of automobiles. According to a 2018 report published by Arity, a Chicago-based company that studies transportation data, more than half of millennials say that car ownership isn’t worth the money or the hassle, and that they don’t much care for driving anyway. It’s worth noting that these are the same people who are currently leading the leading the public fight against climate change, refusing to accept the untenable status quo foisted upon them through the inaction of their elders.

This generation is also, not coincidentally, key to the future economic success of cities, states and regions. If you want to attract young, educated professionals to your city or town, you’d be wise to meet their demands for better and more plentiful public transportation.

Let’s face it: When it comes to feelings about mass transit, young Americans appear to have more in common with Asian and European citizens of all ages than they do with older Americans. In anticipation of the day when they’re calling the shots economically and politically — a day that’s already dawning — we should be busy installing high-speed rail systems in all regions of the country where traffic congestion, pollution and the expenses associated with driving hinder travel between major cities and reduce the quality of life for their citizens.

Jeff Turrentine is the culture & politics columnist at NRDC’s onEarth.