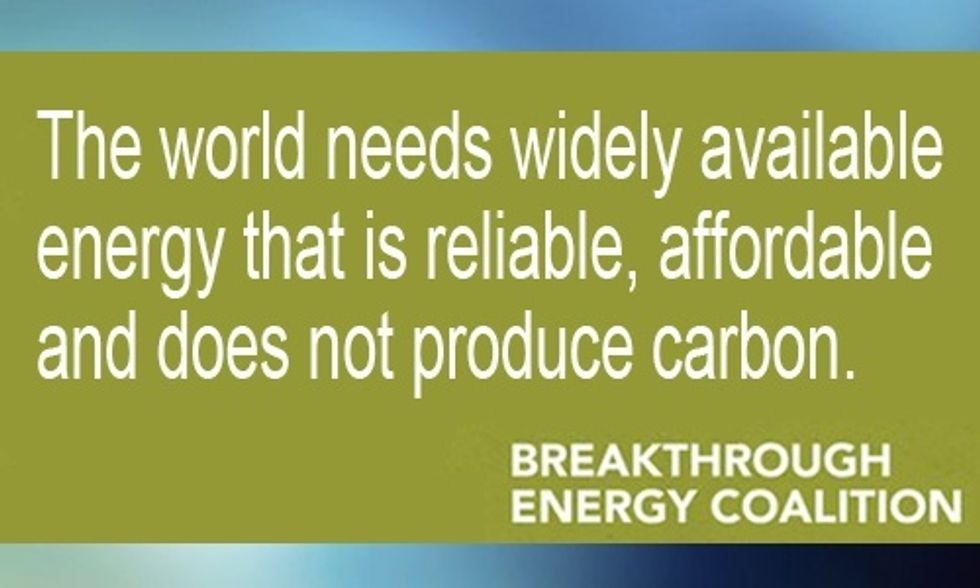 One of the best ways to meet the commitments laid out in the climate deal and reduce greenhouse gas emissions will be to gradually replace fossil fuels with other forms of energy that are renewable and do not damage the environment. To do this, we need to dramatically increase investment in basic and applied renewable energy research. The goal of this work is to make renewable energy commercially viable. We need breakthroughs in solar cell and energy storage technology that make renewable energy less expensive and more convenient than it is today. The batteries in electric cars need a range of 1,000 miles rather than a few hundred. Home energy storage systems and solar cells must become smaller and less expensive. The technology must be so attractive that it drives fossil fuels from the marketplace.

One of the most significant moments for clean energy in the past few weeks was announced even before the Paris talks began: Bill Gates, along with more than 20 other billionaires, established the Breakthrough Energy Coalition, a private sector group committed to investing in renewable energy technologies. Promising more than a billion dollars of investment, this is the largest clean energy fund ever created. According to Coalition investor and Facebook CEO Mark Zuckerberg, "progress towards a sustainable energy system is too slow and the current system doesn't encourage the kind of innovation that will get us there faster." I couldn't agree more.

While the private sector has the resources and cash to invest in renewable energy technologies, it can't do it alone. Joining Gates' effort, twenty countries, including major carbon emitters like the U.S., India and China, pledged to double their investment in renewable energy technology by 2020. This public-private partnership “will be a critical step toward limiting global warming," the White House said.

Public-private partnerships have been around since the start of the U.S. and exist at all levels of government. Basic science and technology has historically been funded by the U.S. government and taken place in national and university laboratories. When the technologies matured, some were released for commercial use. Perhaps the best example is the personal computer, which has shrunk significantly in size since the 1970s and has dramatically increased in computing power. A product used by billions of people worldwide began as an investment by the U.S. federal government, in order to develop better missile guidance systems for the U.S. Department of Defense and smaller on-board computers for NASA's space program.

Local government interest in sourcing renewable energy in the U.S. is clear. Many cities, including New York City, have made pledges to increase their renewable energy use and this week San Diego became the largest American city to legally commit to 100 percent renewable energy.

“With a unanimous City Council vote, San Diego, the country's eighth-largest city, became the largest American municipality to transition to using 100 percent renewable energy, including wind and solar power. In the wake of the Paris accord, environmental groups hailed the move as both substantive and symbolic. Other big cities, including New York and San Francisco, have said they intend to use more renewable energy, but San Diego is the first of them to make the pledge legally binding. Under the ordinance, it has committed to completing its transition and cutting its greenhouse gas emissions in half by 2035."

Eventually, every state in the U.S. will have to meet U.S. Environmental Protection Agency's clean power regulation requirements. This will be difficult to do with current energy technology. Government must fund the basic research and enough of the applied research to demonstrate potential profitability. One good piece of news is that it appears that in exchange for lifting restrictions on oil exports, the favorable tax treatment of renewable energy in the U.S. will not end in December of 2016. Ending that tax expenditure would have slowed down the growth of the solar and wind industry and have an immediate and dramatic impact on the production of greenhouse gases.

At some point, technology will take over. Fossil fuels will eventually be driven from the marketplace by something better and cheaper, but we first need the investment in basic and applied research to make that happen. The transition from an economy based on the one-time use of finite resources to one that relies on renewable resources requires a sophisticated, high-powered public-private partnership. The commitments made by Gates and the White House are a good start and there are many other signs that the transition from fossil fuels has begun. The speed of that transition, however, will depend on creativity, consensus and cash to be completed.

Leonardo DiCaprio Is at It Again, Invests in Energy Technology Company Zuli