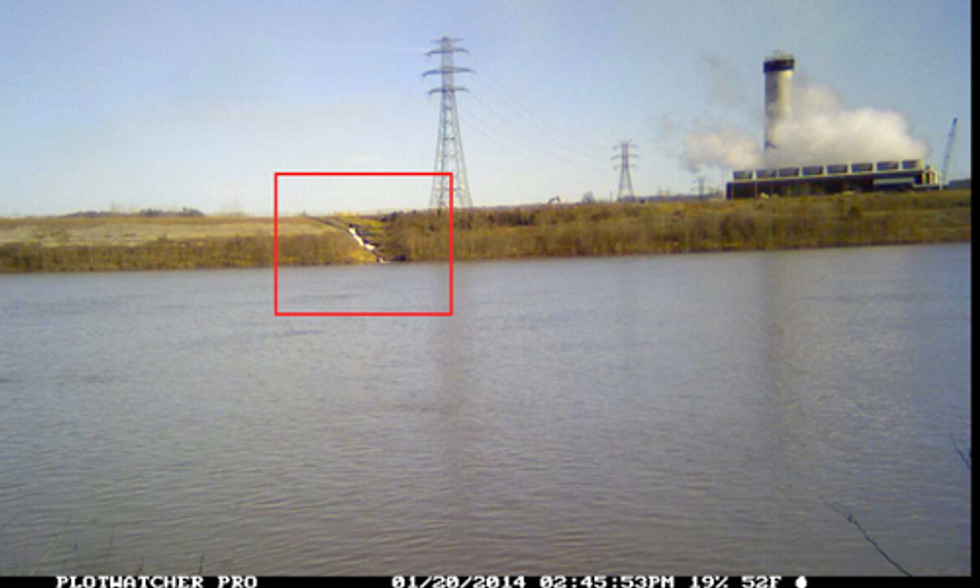 Time-lapse photography from a camera strapped to a tree has captured a year’s worth of images proving that dangerous coal ash wastewater from a plant owned by the utility company Louisville Gas & Electric (LG&E) is pouring unabated into the Ohio River.

This photographic evidence, along with Google Earth satellite images from 1993 to present, support the Sierra Club and Earthjustice’s notice of intent to sue LG&E for violating the federal Clean Water Act and the terms of the utility’s own permit allowing only an “occasional” discharge into the river.

"It's devastating to think that this could have been going on for more than 20 years,” said Sierra Club organizer Thomas Pearce, who helped install the hidden camera last year. "It's like the North Carolina or West Virginia spills but in slow motion, with no one to stop it."

A coal ash pond for LG&E’s Mill Creek Generating Station, which sits on the Ohio River, is the source of the pollution. The U.S. Environmental Protection Agency (EPA) previously classified the pond as being “high hazard,” meaning a failure or misoperation of the ash pond dam will likely result in fatalities and environmental damage.

While the federal Clean Water Act does protect waterways from pollution, there are no federal safeguards specific to coal ash pollution. The Sierra Club is part of a legal agreement with 11 organizations compelling the EPA to finalize safeguards against coal ash pollution by Dec. 19.

Coal ash is the toxic byproduct left over when coal is burned to generate electricity. It contains dangerous chemicals including mercury, arsenic (a known carcinogen), lead, selenium, cadmium and many other harmful metals and pollutants. These toxic metals build up in ecosystems and most are dangerous even in very small amounts.

According to a 2010 report to Congress on the condition of Kentucky waters submitted by the Kentucky Energy & Environmental Cabinet, the Ohio River is impaired by mercury pollution and is subject to a fish consumption advisory.

“LG&E is breaking the law, contaminating our water and deliberately putting us at risk for their own profit,” said Louisville resident Mark Romines, whose home sits less than a quarter of a mile from the Mill Creek coal plant.

The Mill Creek coal plant and its associated coal ash pond are 500 feet from a large residential development and 1,000 feet from a middle school. Despite this close proximity, Kentucky law does not require LG&E to test its coal ash wastewater for toxic levels of pollution.

“Coal ash contamination is rampant across the country, and the evidence gathered at Mill Creek is unequivocal,” said Earthjustice attorney Thom Cmar. “Coal ash has already polluted more than 200 lakes, rivers, streams and drinking waters. The problem continues to worsen, but no federal protections exist. Our household garbage is better regulated than this toxic waste.”

Coal-fired power plants are some of America's biggest water polluters, dumping more toxic pollution into rivers and streams than any other industry in the U.S. Every year, the nation's coal plants produce 140 million tons of coal ash pollution—and those tons of toxic material are stored in unlined and unmonitored dumps, leaking into groundwater and streams that nearby communities often rely on for drinking water. At Mill Creek, the coal ash pond is also unlined and dumping directly into the Ohio River.