Hickenlooper Not the Only Government Official Trying to Frack Colorado 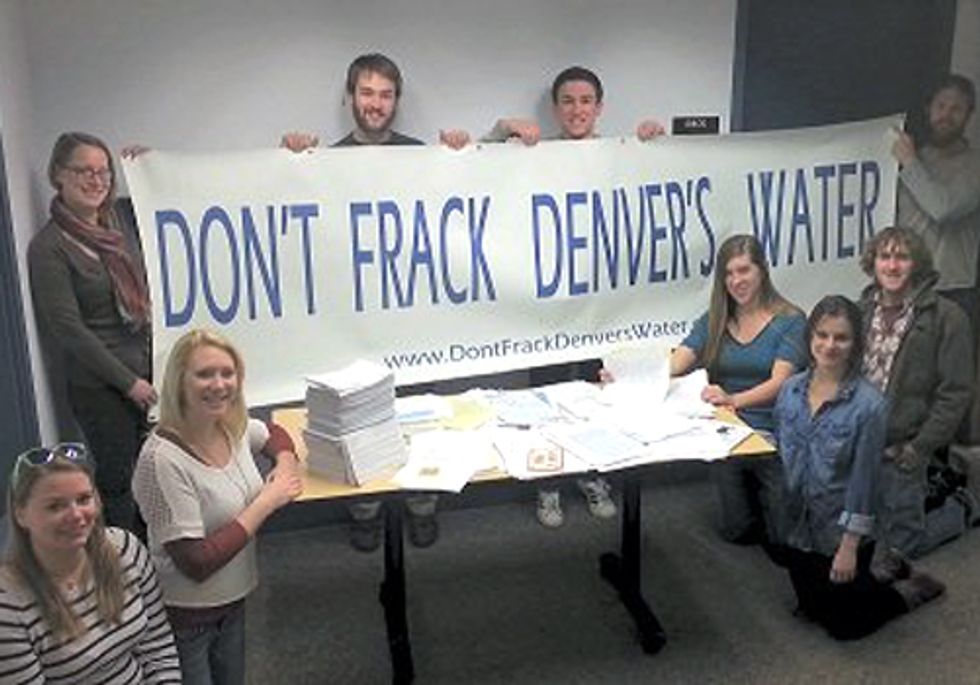 Over the past few weeks, Colorado's Governor John Hickenlooper has gotten a lot of negative attention. First, for telling a U.S. Senate committee that he drank Halliburton's frack fluid and second, for threatening to sue the City of Fort Collins for its ban on fracking.

But Hickenlooper isn't the only government official trying to frack Colorado.

Helen Hankins, who directs the Colorado office of the U.S. Bureau of Land Management (BLM), has also been in the very-uncomfortable glare of public fracking scrutiny, and for a good reason. The Colorado BLM has stirred up a hornet's nest of controversy over the past year proposing fracking in three areas of the state.

Second, in the North Fork Valley along the North Fork of the Gunnison River, Hankins's BLM proposed a large number of oil and gas wells in a verdant agricultural valley well-known for being one of the organic farming breadbaskets of Colorado. The valley contains dozens and dozens of farms, local artisanal restaurants, world-class wines from local vineyards, and produces the majority of apples and peaches for the whole state.

Third, near Colorado's national parks and monuments, Hankins' BLM proposed drilling and fracking right beside the visitor center at Dinosaur National Monument in Northwest Colorado, and on lands next to Mesa Verde National Park in Southwest Colorado. The drilling at Dinosaur would have been so close that visitors would see the drill rigs while supposedly enjoying the pristine National Monument experience.

Fortunately, in each case, the public has risen to the challenge and so-far fought off Hankins's threat.

After considerable public outcry from Park County leaders, residents, sportsmen and clean water advocates, Hankins deferred the leases in the Denver metro watershed citing concerns about fracking and drinking near water supplies. Part of that outcry came from the Denver-based environmental group, Clean Water Action, which knocked on several thousand doors in the metro area and delivered 2,000 letters and postcards to Hankins at the BLM's February meeting. Those letters and postcards called on BLM to immediately complete a Master Leasing Plan in South Park to protect Denver's water. While Hankins's deferral is an important short-term band-aid, the parcels can be put on the auction block again in the next few months thus renewing the threat. In fact, that's exactly what Hankins has done on other BLM land in Colorado—first delay, and then later lease.

Similar short-term good news came for the residents of the North Fork Valley. A few days before the BLM's February meeting, those parcels were also deferred, but that didn't stop those residents from speaking out louder. At the February BLM meeting, many North Fork Valley residents still showed up to publicly testify against the drilling and fracking in the valley. One of the big concerns of Valley residents is that the BLM proposed to "lease first, plan later" by relying on out of date plans, sometimes with little information on oil and gas drilling or impacts on which to base their leasing decisions.

"I can't think of a better way to ruin a national park experience than by putting a drill rig next to the visitor center. Director Hankins should be applauded for taking a step back. Now we need to pursue a smart from the start comprehensive strategy for energy development on public lands."

As a response to the deferrals in the national parks, a new paid ad campaign calling on Hankins and the Colorado BLM to protect our national parks from drilling was launched last week by statewide environmental group, Environment Colorado. The billboard is visible on I-70 in Golden, just west of the U.S. Bureau of Land Management's Colorado office.

Denver metro residents don't want cancer-causing fracking chemicals in their water or in their watershed. Nor do Coloradans want drill rigs next to their national parks or in the midst of booming agricultural valleys.

As she moves forward, Helen Hankins needs to not just defer these parcels, but permanently protect them—if she doesn't do that she will likely join the ranks of frack-happy government officials like Hickenlooper and face increasing public scrutiny and wrath.

For a complete accounting of fracking in Colorado, click here.