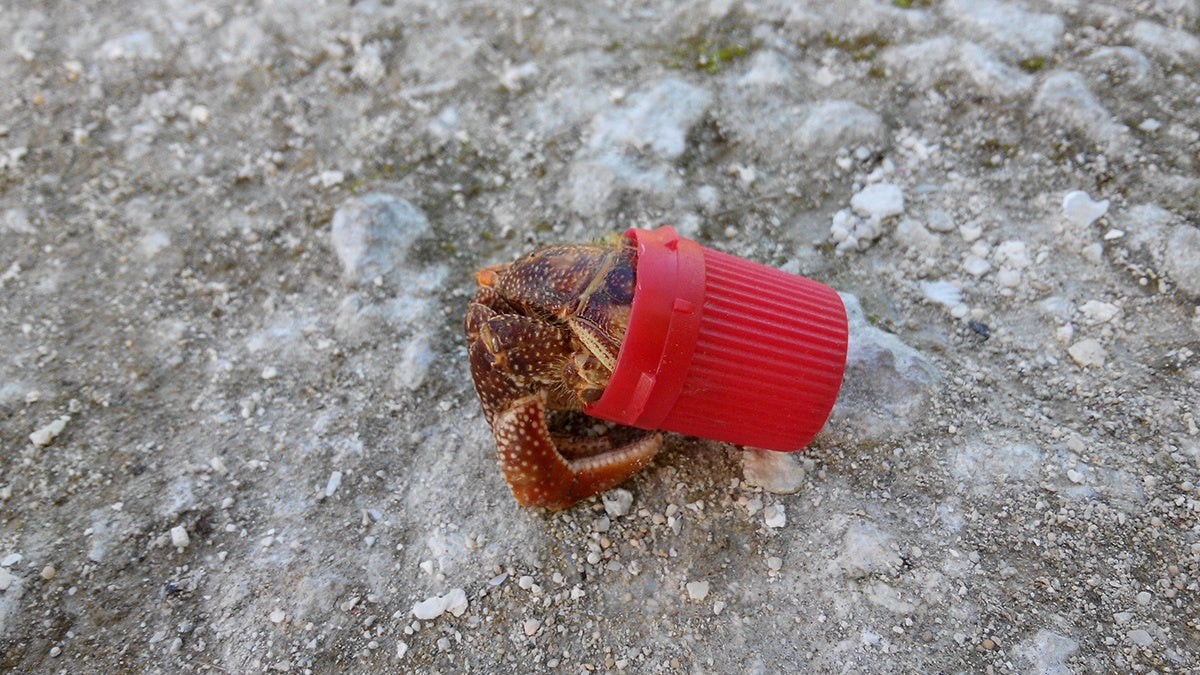 Plastic debris washed up on remote islands in the Indian and Pacific Oceans has killed hermit crabs, which mistake the plastic for shells, as CNN reported.

The researchers visited Cocos (Keeling) Island, an Australian territory in the Indian Ocean that sits west of Christmas Island, and described the tropical paradise as “literally drowning in plastic.” In fact, they found an estimated 414 million pieces of plastic. The researchers also found dead hermit crabs in the bottles and containers that washed ashore, according to The Washington Post.

The scientists estimate that 508,000 hermit crabs died mistaking plastic for safety on Cocos (Keeling) Island, while another 61,000 perished the same way 8,000 miles away on Henderson Island in the south Pacific, according to CNN.

“When we were surveying debris on the islands, I was struck by how many open plastic containers contained hermit crabs, both dead and alive,” said Jennifer Lavers, a researcher at the University of Tasmania’s Institute for Marine and Antarctic Studies, who led the study, in a university statement. The study was published in the Journal of Hazardous Materials.

Hermit crabs do not have their own shells so they use found, hollow objects for shelter and protection — objects like shells, according to CNN. They spend a large portion of their lives seeking out shells for protection that will fit their growing bodies.

The hermit crabs that climb into plastic bottles find the surface too slippery to get traction. Therefore, they cannot climb out of them, according to The Washington Post.

“The question was, is Cocos unique, or is this a more widespread problem that could be happening anywhere?” said Lavers to The Washington Post. “That’s what these two islands suggest: A lot of places where you have crabs and debris, this is probably happening.”

The washed up plastic creates a cascade of death for the hermit crabs. When one hermit crab dies, it starts a chemical reaction that emits an odor to other crabs signaling that a shell is available. Therefore, a crab that dies sets off a chain-reaction, drawing more and more crabs to the plastic with a scent that increases in strength, according to Alex Bond, a a curator at London’s Natural History Museum who contributed to the study, as The Washington Post reported.

“It’s not quite a domino effect. It’s almost like an avalanche,” said Bond to The Washington Post. “Hermit after hermit going into these bottles thinking they’ll get their next home, when in reality, it’s their last home.”

The study warned that if this effect is repeated worldwide, it has a deleterious effect on marine ecosystems around the world.

“Hermit crabs play a crucial role in the health of tropical environments by aerating and fertilizing soil, and dispersing seeds and removing detritus, as well being a key part of the marine ecosystem,” Lavers said. “Their population degradation is more than just a risk to the natural environment. They are also an important part of marine ecosystems that humans rely on for fishing, recreation and tourism, so ultimately the impacts may also be economic.”

Lavers and Bond both say that the scourge of plastics washing up on beaches should mobilize people to help with beach clean-ups.

“This is a perfect opportunity for those who were thinking about getting involved [in beach cleanups],” said Laver, as The Washington Post reported. “It’s not just removing plastic from the beach because it’s unsightly, but it’s potentially doing a lot for hermit crab populations.”