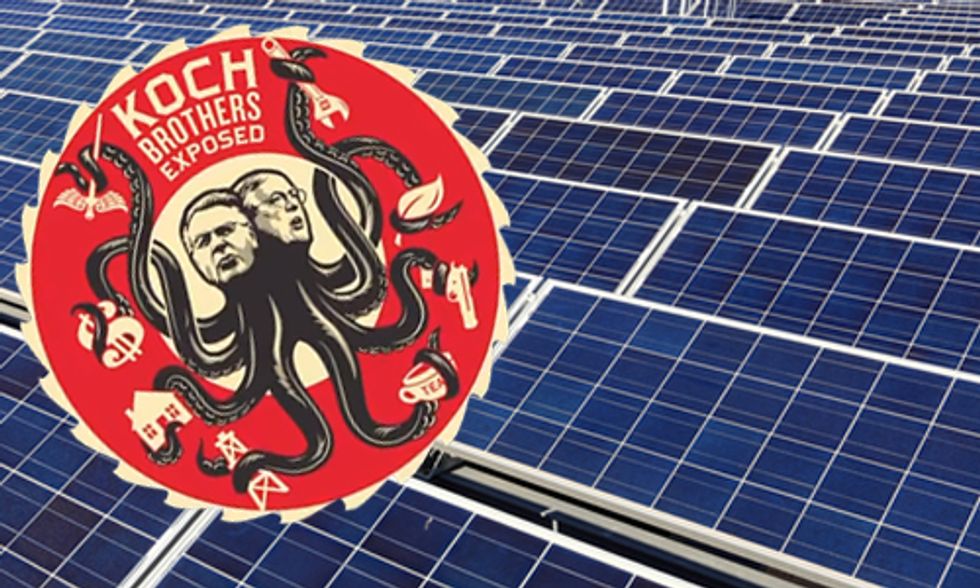 In the critically-acclaimed movie, All the President’s Men, a shadowy, raspy-voiced character named Deep Throat advises Washington Post reporters Bob Woodward and Carl Bernstein to “follow the money” in the wake of the Watergate break-in and cover-up. That was more than 40 years ago. Yet, in the bare knuckles, take-no-prisoners world of Washington politics, the more things change, the more they stay the same.

Over the years, critics of clean energy have learned a few things about dirty politics. In their latest attempt to protect fossil fuel special interests—and stop the progress of renewable energy dead in its tracks—they have turned to a tried-and-true tactic: someone in Congress asks for a half-baked study on energy subsidies, designed to leave skewed results and certain to draw the interest of government watchdog groups. Then, a front group for the Koch brothers steps in and starts trashing clean energy, and Americans find themselves confused.

Welcome to Washington, Mr. Smith. As Mark Twain once mused, “A lie can travel half way around the world while the truth is putting on its shoes.”

This latest dustup started with a new report by the Energy Information Administration (EIA), which offers a snapshot in time of the different incentives for various energy sources, and was requested by several Republican members of Congress. Predictably, Watchdog.org then picked up the report and posted a story with the less-than-flattering headline, “Solar and wind energy pack a wallop—in federal subsidies.” While Watchdog.org did a good job of seeking comment from both the solar and wind industries, the real truth about clean energy incentives was consistently clouded by an organization known as The Institute for Energy Research, which—surprise, surprise—was founded by Charles Koch and former Enron executive Robert Bradley, who wrote speeches for disgraced Enron CEO—and I should add, corporate crook—Ken Lay.

For its part, EIA did what it was asked to do, but the request was narrowly defined to only include subsidies with clear identifiable impacts on the U.S. Treasury and that are provisions specific to energy. This restrictive definition leaves out some of the largest fossil and nuclear subsidies, which results in a skewed, apples-to-oranges comparison. For example, the EIA report omits:

Additionally, EIA did not include any loan guarantees in the subsidy numbers because guarantees, or outlays, were not made in 2013. This goes for nuclear, renewables and others. But it’s important to point out, nuclear did get a disproportionate share of the loan guarantees in prior years.

In a previous iteration of this report, EIA refused a request to display subsidies per unit of energy, or per unit of capacity, because it is an invalid/misleading metric for judging subsidies. Because most subsidies are frontloaded, traditional generation—such as coal, nuclear and hydro—received their government support years or decades ago, and the plants built with that support continued to exist and generate energy in 2013—even if their support did not include substantial outlays in 2013. This is one of the key points of the widely-respected Baker Center study.

The Baker Center study also shows that solar incentives are in line with those given to other energy industries. What’s more, solar is following a similar curve in development as traditional energy sources (coal, gas, oil), which received substantial subsidies during their growth period and are still getting many of them today.

Even the nonpartisan Congressional Research Service has explained, “For more than a half a century, federal energy tax policy focused almost exclusively on increasing domestic oil and gas reserves and production. There was no major tax incentive promoting renewable energy or energy efficiency.” In other words, the Koch brothers and fossil fuel interests were given a stranglehold on the marketplace—thanks, in large part, to preferential tax treatment and federal subsidies—and now they want to freeze everyone else out.

For example, by its own figures, the oil and gas industry will receive nearly $100 billion over the next 10 years in special tax breaks, including: expensing of intangible drilling costs; the domestic manufacturers tax deduction; use of the “last-in, first-out,” or LIFO, accounting method; exemption from Superfund waste cleanup taxes; and preferential treatment that reduces taxes for master limited partnerships.  And the list goes on.

In truth, the oil and gas industry has been getting substantial tax breaks since 1913, while solar has only been receiving the 30 percent Investment Tax Credit (ITC) since 2006.

Most troubling, the EIA report only looks at the “costs” to the U.S. Treasury of solar subsidies—without considering a single dime of economic benefits—or return on investment—created by one of the fastest-growing industries in America. Today, solar employs nearly 175,000 Americans—with 140,000 of those jobs created since the ITC was implemented—and we pump nearly $20 billion a year into the U.S. economy. We’re also providing enough clean electricity to power 4 million homes.

Similarly, the report does not take into account the huge amount of income taxes paid by solar developers, distributors, installers, manufacturers and employees, as well as the taxes paid by support industries including engineering, financing and legal. Nor does the report include any indirect, or induced, benefits from widespread solar development.

From an environmental prospective, the EIA report does not take into account the staggering costs from harmful carbon pollution to the health and well-being of Americans. Today, the solar industry is helping to displace an estimated 20 million metric tons of damaging carbon emissions, which is the equivalent of removing 4 million cars off U.S. highways and roads. So, through this omission, the report mistakenly dismisses the real health care costs of “dirty air,” which is associated with asthma, lung disease, heart disease and even cancer.

And finally, the report also fails to include the benefits that solar provides when it comes to national security, emergency preparedness, grid reliability, America’s clean energy future and on and on.

We’re very proud of the progress made by the solar industry in a very short period of time—and we appreciate the faith put in us by both Republicans and Democrats in Congress, by both President Obama and President Bush, and by 9 out of 10 Americans who want to see an expanded use of solar nationwide. By any measurement, the solar ITC is paying huge benefits to the U.S. and to American taxpayers, and we believe it should be extended to maintain a level playing field with long-time, entrenched energy sources.

Unfortunately, you would never know any of this by reading the EIA report, or listening to the subsequent scathing attacks on solar and wind by the Koch brothers’ cronies. But before getting all worked up by their nonsense, I’m reminded of something else Mark Twain once said: “Never argue with stupid people. They will drag you down to their level and then beat you with experience."