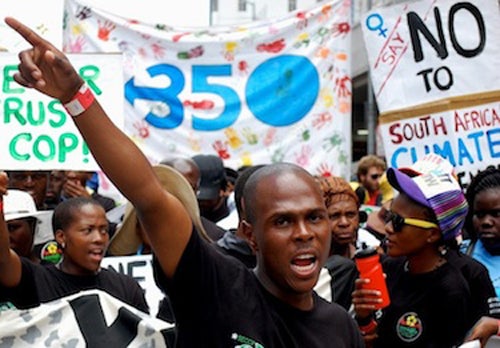 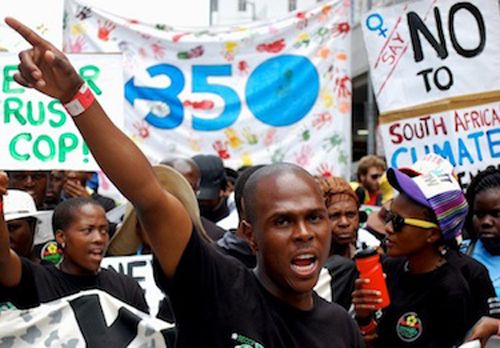 What if someone told you we should abandon all hope for global climate action until 2020? Well, that’s exactly the proposal that the U.S. is pushing at the United Nation Climate Talks taking place this week in Durban, South Africa. The 2020 delay might well be the worst idea ever.

Waiting nine years for climate action isn’t just a delay, it’s a death sentence for communities on the front lines of the climate crisis—and it could slam the door on ever getting carbon pollution levels below the safe upper limit of 350 parts per million.

It’s not too late to stop this delay from going through. Over the next three days, our team of 350.org activists in Durban will be working with our partners at Avaaz and allies from around the world to isolate the U.S.—and build support for the African nations that are fighting for real climate action. But it will take a massive grassroots outcry to demonstrate that people everywhere are taking a stand to prevent the U.S. negotiators from signing away our future.

If we raise an international alarm before the talks end on Friday, we can convince the U.S. to get out of way of progress and help unlock the global process that can lead to bold climate action all around the world.

Click here to add your voice to a global call to action we’re delivering in Durban: www.350.org/durban

The climate talks in South Africa end in just 48 hours, and it’s vital that we ramp up the pressure now. To make sure the U.S. gets the message, our team on the ground here in Durban will deliver your messages directly to the U.S. negotiating team at a high-impact event we’re helping to pull together on Friday. We can’t say much more about it now, but suffice to say our message will be unavoidable.

This year, the 350 network has shown that people power can truly move the planet in the right direction. We mobilized hundreds of thousands of people to push for climate action in nearly every country on earth. We beat back the Keystone XL pipeline when no one said it was possible. We took over the radio waves to spread a message of hope and action on the climate crisis. And through our actions, we helped keep the hope of saving our planet—and reaching 350 ppm—alive.

The United Nations Climate Talks here in Durban aren’t going to get us back to 350 by themselves, but they can keep the option open by making progress on a legally binding, international framework to help nations make serious cuts in carbon emissions. In 2012, we’re going to need to do all we can to challenge the fossil fuel companies that are the real obstacles to progress. Breaking their stranglehold on our governments is the only way to really unlock these negotiations.

But right now, the most important thing we can do is keep the possibility of a strong international climate deal alive by pushing back on the U.S. negotiating team. In recent months, President Barack Obama has shown that he’ll stand up for the climate, but only if he’s got a movement to back him up. On the Keystone pipeline, he’s been doing the right thing by blocking Republican efforts to push it through—now we need him to do the right thing on the international stage.

There’s no guarantee that we’ll be successful, but we owe it to our allies across the planet—many of whom are already feeling the impacts of climate change—to resist the chorus of cynics and keep hope alive. As Nelson Mandela said, “It always seems impossible until it’s done.” The 350 network has pulled off the impossible before—now’s the time to step up the pressure again.