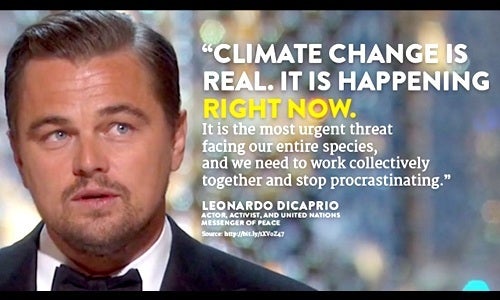 Making ‘The Revenant’ was about man’s relationship to the natural world, a world that we collectively felt in 2015 as the hottest year in recorded history. Our production needed to move to the southern tip of this planet just to find snow. Climate change is real, it’s happening right now. It is the most urgent threat facing our entire species.

Last year, the Leonardo DiCaprio Foundation joined the Compton Foundation, along with 500 other institutions and 50,000 individuals, in a global pledge to move their money out of planet-heating fossil fuels. This global “divestment” movement draws on a core innovation of the anti-Apartheid era, when American universities and nonprofit organizations pulled their investments out of companies doing business with the Apartheid government that treated blacks as inferior to whites. That campaign was later credited by Nelson Mandela and Archbishop Desmond Tutu as pivotal to the downfall of Apartheid.

The fossil fuel divestment and clean energy reinvestment movement follows this proud tradition. In less than five years, it has united a diverse and global coalition, moving capital away from the industries that produce climate change and into industries that promote climate resilience and clean energy. Today, faith groups, universities, pension funds, sovereign wealth funds, global insurance companies, people, cities, and health organizations—controlling over $3.5 trillion in assets—are divesting from the past and investing in the future.

Our common cause is rooted in the belief that our investments must not undercut a future for our children: It is immoral to invest in companies whose current business model is predicated on destroying our only home. It is also bad business. With coal stocks in terminal decline and oil teetering between $30 and $50 a barrel, the forecast for fossil fuel investments is bleak and volatile. Committing to do what is right has never been so easy.

The Divest-Invest movement is the most potent climate campaign of all time. Its power derives from its democracy and its hope: Everyone has something to divest, or is part of an institution he or she can pressure to divest. Students succeeded in moving both Stanford and the University of California system to divest from coal; workers looking after the value of their pensions were integral to the success of California legislation SB 185 requiring the California public pension funds to divest.

Reinvestment in a clean, just and renewable energy future is just as important—it is the solution to the problem. That is why members of Divest-Invest commit to investing part of our portfolios into the climate solutions needed to put humanity back on course. With this investment comes enormous opportunity, to not only align investments with values but to profit from the growth industries of the future. Our members report their financial performance is only improving, as renewable energies are increasingly cheap and fossil fuels are increasingly costly.

The Paris agreement ratified in December 2015 gave the world a new mandate to pursue climate mitigation with all deliberate speed. Enshrining a target of limiting global warming to 1.5 degrees Celsius, the agreement recognizes that the world must be almost entirely carbon-free by 2050. Governments cannot go it alone. Businesses, civil society and individuals must rally together to accelerate the transition already underway.

“Let us not take this planet for granted,” DiCaprio said in closing his Oscar speech. Each of us can heed his call by joining the global movement to divest and invest.

Ellen Friedman is the executive director of the Compton Foundation, a San Francisco-based philanthropy focused on the intersection of human rights and the arts. Compton was a founding member of Divest-Invest Philanthropy, the foundation arm of a global movement spanning universities, pension funds, faith groups, health organizations, sovereign wealth funds, insurers, individuals and more.