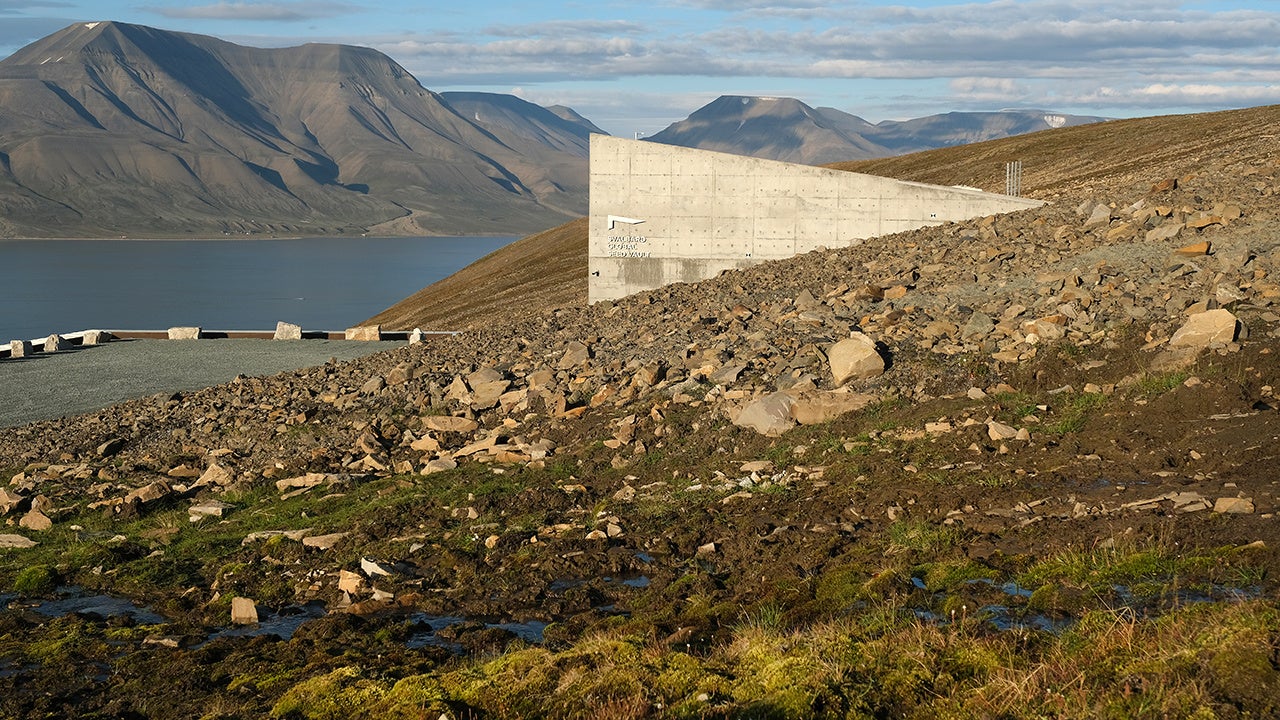 Water trickles down a hillside among moss next to the entrance to the Svalbard Global Seed Vault during a summer heat wave as mountains behind stand devoid of snow on Svalbard archipelago on July 29 in Longyearbyen, Norway. Sean Gallup / Getty Images

What better place to build a Doomsday Vault than the remote, snow-covered islands of Norway’s Arctic Svalbard? Sitting around 1,000 kilometers from the North Pole, the facility is buried in permafrost to protect the precious seed samples housed there. But a freak heatwave is causing the region’s ice to melt.

Following several days of near record-breaking hot weather in July, Svalbard temperatures topped out at 21.7℃, the country’s meteorological institute reported. This is the hottest ever recorded here, exceeding the previous record of 21.3℃ set over 40 years earlier and a stark contrast to the region’s average of between 5-7℃ for this time of year.

The Svalbard Global Seed Vault – also known as the Doomsday Vault – is a gigantic bunker, sitting deep inside a mountain surrounded by snowy wastelands. The facility stores close to 900,000 seed samples from around the world and acts as a sort of back-up plan for agriculture, should disaster render parts of the planet unlivable or the world suffer a catastrophe, such as nuclear war or extreme climate change.

It’s been described as an “insurance policy for food security.”

Inside the vault, temperatures are kept below minus 18℃, cold enough to keep the seed samples safe for at least 200 years, even without backup power. But climate change is causing problems for the vault.

In 2016, which was the warmest year on record according to NASA, soaring temperatures caused meltwater to breach the vault’s entrance tunnel. While no seeds were damaged, the floodwater left an expensive repair bill and tarnished the vault’s reputation as impregnable to natural or manmade disasters.

The Heat Is On

Warming in the islands has been underway for some time. Figures for 2017 show average temperatures are between 3-5℃ hotter than in 1971, according to the Climate in Svalbard 2100 report, with the largest increases affecting the inner fjords.

Between 2071 and 2100, average temperatures throughout the archipelago will increase by between 7-10℃, the report predicts, shortening the snow season and causing loss of near-surface permafrost.

What’s happening in Svalbard is symptomatic of wider changes impacting the Arctic expanse, which is warming twice as fast as the rest of the planet. Parts of the Canadian Arctic are thawing 70 years earlier than predicted, scientists from the University of Alaska Fairbanks found, a sign that climate change could be happening faster than first thought.

As warmer-than-average summers destabilize permafrost, much of which has lain frozen for millennia, methane and other gases trapped in the ice could be released at scale, accelerating climate change. In turn, warmer temperatures would lead to further permafrost loss.

Melting ice, on land and at sea, destroys animal habitats for species like polar bears and Arctic foxes, which use their snowy white coats as camouflage either to hunt for food or avoid predators.

Climate scientist Dr Boris K Biskaborn of the Alfred Wegener Institute polar and marine research centre found Arctic continuous permafrost ground temperatures increased by 0.39℃ between 2008 and 2016. A similar trend was found in Antarctica, with increases of 0.29℃ over the same period.

Warming ground temperatures are an indication of the extent of climate change. Biskaborn predicts melting permafrost could lead to increased Arctic air temperatures of up to 0.27℃ by 2100.

Svalbard’s seed bank exists to protect the world’s most valuable natural resources from catastrophe. If we want to avoid making multiple withdrawals, tackling the underlying causes of climate change is a priority.