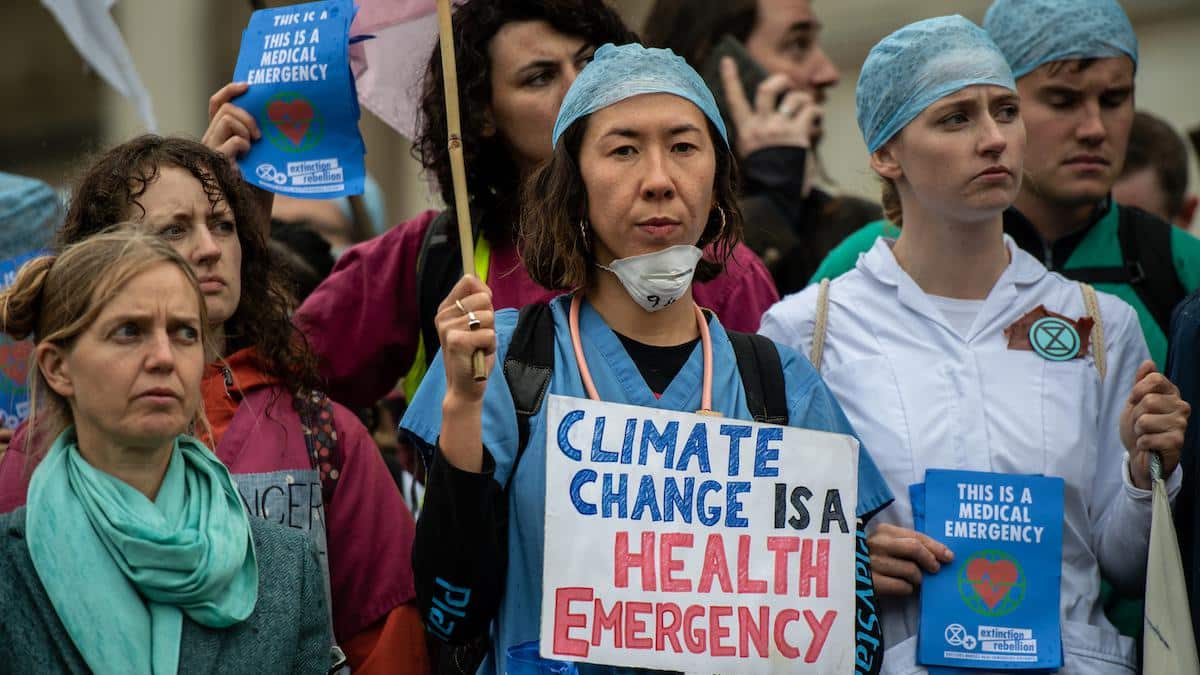 Asserting that humanity “cannot wait for the pandemic to pass” before acting to rapidly reduce carbon emissions fueling the climate emergency, more than 220 health journals around the world on Sunday published an unprecedented joint editorial calling for “urgent action to keep average global temperature increases below 1.5°C, halt the destruction of nature, and protect health.”

The editorial — which appears in journals including The Lancet, The New England Journal of Medicine, The Chinese Science Bulletin, The East African Medical Journal, Brazil’s Revista de Saude Publica, and The National Medical Journal of India — was published ahead of next month’s United Nations Biodiversity Conference in Kunming, China and November’s U.N. Climate Change Conference (COP 26) in Glasgow.

“The science is unequivocal; a global increase of 1.5°C above the pre-industrial average and the continued loss of biodiversity risk catastrophic harm to health that will be impossible to reverse,” the authors write. “Despite the world’s necessary preoccupation with Covid-19, we cannot wait for the pandemic to pass to rapidly reduce emissions.”

Noting that “health is already being harmed by global temperature increases and the destruction of the natural world,” the editorial continues:

The risks to health of increases above 1.5°C are now well established. Indeed, no temperature rise is ‘safe.’ In the past 20 years, heat-related mortality among people older than 65 years has increased by more than 50%. Higher temperatures have brought increased dehydration and renal function loss, dermatological malignancies, tropical infections, adverse mental health outcomes, pregnancy complications, allergies, and cardiovascular and pulmonary morbidity and mortality. Harms disproportionately affect the most vulnerable, including children, older populations, ethnic minorities, poorer communities, and those with underlying health problems.
Global heating is also contributing to the decline in global yield potential for major crops, falling by 1.8% to 5.6% since 1981; this, together with the effects of extreme weather and soil depletion, is hampering efforts to reduce undernutrition. Thriving ecosystems are essential to human health, and the widespread destruction of nature, including habitats and species, is eroding water and food security and increasing the chance of pandemics.

“The consequences of the environmental crisis fall disproportionately on those countries and communities that have contributed least to the problem and are least able to mitigate the harms,” the authors write. “Yet no country, no matter how wealthy, can shield itself from these impacts,” which will include “more conflict, food insecurity, forced displacement, and zoonotic disease.”

The greatest threat to public health is the continued failure of world leaders to keep the global temperature rise below 1.5°C.

We've joined more than 200 health journals across the world who have come together to urge governments to acthttps://t.co/fChKgDNre0 #HealthyClimate pic.twitter.com/MEqBK5qx3V

“As with the Covid-19 pandemic, we are globally as strong as our weakest member,” the editorial argues, calling current efforts to combat the climate emergency “insufficient.”

“This… means that temperature increases are likely to be well in excess of 2°C, a catastrophic outcome for health and environmental stability,” the publication warns. “Health professionals are united with environmental scientists, businesses, and many others in rejecting that this outcome is inevitable.”

“More can and must be done now — in Glasgow and Kunming — and in the immediate years that follow,” urge the authors. “Governments must make fundamental changes to how our societies and economies are organized and how we live. The current strategy of encouraging markets to swap dirty for cleaner technologies is not enough. Governments must intervene to support the redesign of transport systems, cities, production and distribution of food, markets for financial investments, health systems, and much more.”

“The greatest threat to global public health is the continued failure of world leaders to keep the global temperature rise below 1.5°C and to restore nature,” the journals conclude. “Urgent, society-wide changes must be made and will lead to a fairer and healthier world.”

Commenting on the editorial, Lukoye Atwoli, editor-in-chief of The East African Medical Journal, said that “while low- and middle-income countries have historically contributed less to climate change, they bear an inordinate burden of the adverse effects, including on health. We call for the world’s wealthier countries to do more to offset the impact of their actions on the climate.”

In a statement preceding publication of the landmark editorial, World Health Organization (WHO) Director-General Tedros Adhanom Ghebreyesus noted that “the risks posed by climate change could dwarf those of any single disease.”

“The Covid-19 pandemic will end, but there is no vaccine for the climate crisis,” he added. “Every action taken to limit emissions and warming brings us closer to a healthier and safer future.”