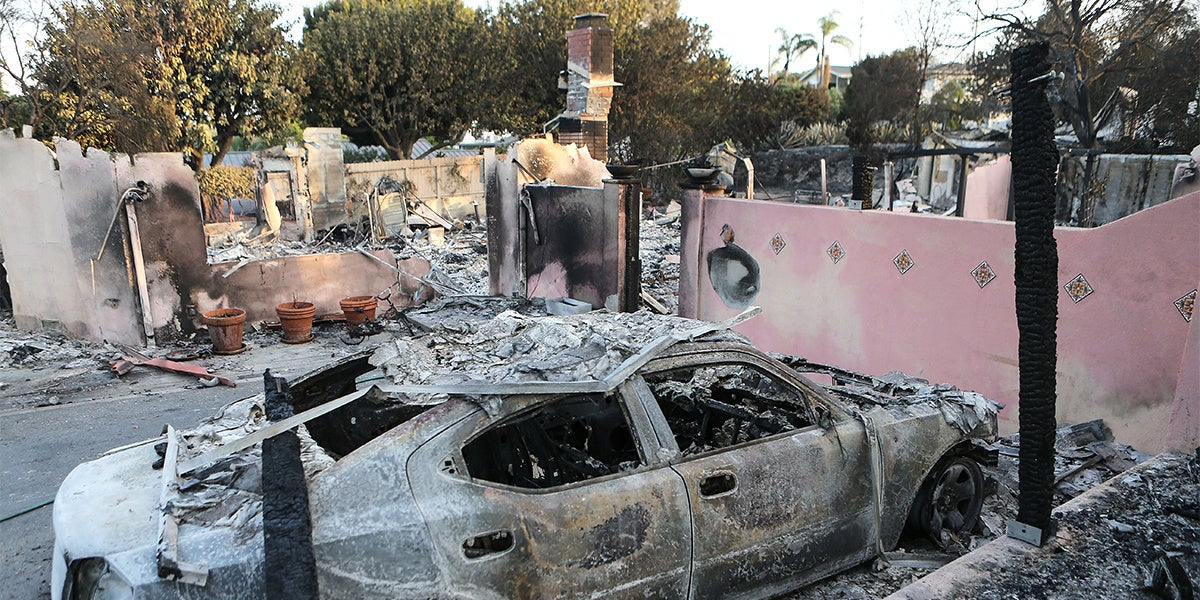 The remains of a destroyed car stand infront of a destroyed home in the aftermath of the Holiday Fire on July 7, 2018 in Goleta, California. The fire destroyed a number of homes in the community during an intense heat wave which broke various records across Southern California. Mario Tama / Getty Images

That 2.5 percent was forced to endure the record-breaking heat wave without air conditioning or fans.

Further south, the San Diego NWS said Friday’s temperature of 120 degrees in Chino might be the highest temperature ever recorded temperature by the Automated Surface Observing Systems (ASOS) in the valley or coastal areas of Orange, Riverside, San Bernardino or San Diego counties.

The 120 degree F temperature at Chino on July 6, 2018 may be the highest temperature ever recorded at an ASOS site (NWS, FAA, or DOD automated surface observing system) in the coastal or valley areas of Orange, Riverside, San Bernardino, and San Diego counties. #CAwx

The record temperatures were a break from historical patterns that usually see Southern California reach its highest temperatures in September and October, according to The New York Times.

The heat wave did no favors for firefighters combating the dozens of wildfires that have broken out in the Western U.S.

A fire that broke out in Santa Barbara County Saturday burned almost two dozen homes and prompted Governor Jerry Brown to declare a state of emergency in the county, The New York Times reported.

On the California-Oregon border, one person died in the Klamathon Fire that started Thursday, the first person to die in this year’s fire season, Reuters reported.

The National Interagency Fire Center reported that as of Friday, fires had burned more than 2.9 million acres, already surpassing the national annual average of 2.4 million acres over the past 10 years, according to Reuters.

However, California firefighters should get some relief in the form of cooler temperatures this coming week.

“Starting Monday we’re going to see a gradual cool down, as we shave just a few degrees off each day until about midweek it gets to something like normal, in the mid-90s (Fahrenheit) inland and 80s at the coast,” Jim Hayes of the NWS Weather Prediction Center in College Park, Maryland told Reuters.