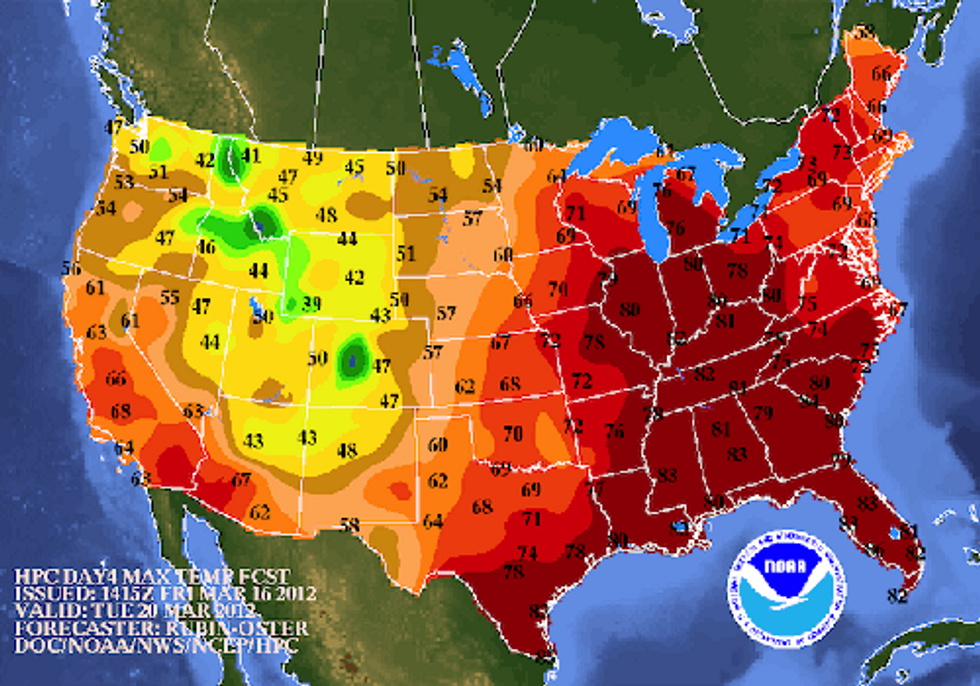 Records continue to fall across much of the U.S., as the extraordinary March heat wave rolls onward. The warm weather, with daytime high temperatures close to 40°F above average in some places, set the stage for severe thunderstorms that spawned rare, damaging March tornadoes near Detroit.

The warm weather is the result of a weather pattern that has become stuck in place, known as a “blocking pattern,” with a stubborn, sprawling area of high pressure in the eastern U.S. that is pumping warm air northward into the Great Plaines, Midwest, Ohio Valley and Northeast. The West, on the other hand, is cool and stormy, with mountain snows and valley rains associated with a big dip or “trough” in the jet stream. As this trough slides slowly east, it may set the stage for an outbreak of tornadoes in the Plains late this weekend, as the cool air collides with the warm and more humid air that lies to the east.

The National Weather Service issued a statement saying: "It is extraordinarily rare for climate locations with 100+ year long periods of records to break records day after day after day... though it is very difficult to precisely quantify just how rare it is because as the period of record grows the likelihood of seeing so many consecutive record-breaking days decreases."

In a long-term trend that has been found to be inconsistent with natural variability alone, daily record-high temperatures have recently been outpacing daily record-lows by an average of 2-to-1, and this imbalance is expected to grow as the climate continues to warm. According to a 2009 study, if the climate were not warming, this ratio would be expected to be even. Other studies have shown that climate change increases the odds of extreme heat events.

Jake Crouch, a climate scientist at the National Climatic Data Center in Asheville, N.C., said the heat wave is comparable to severe summer heat events in terms of the number of records that have been broken, even though temperatures aren’t as hot as they would get during a summer heat event.

“The number of warm maximum temperature records rival the heat waves that have affected the U.S. in the past,” Crouch said, noting that Nevada is the only state in the lower 48 that has not set a daily high temperature record this month.

The warm weather provided the fuel for severe thunderstorms in Michigan, with multiple tornado touchdowns reported near Detroit. One tornado that touched down in Dexter, Michigan was rated an EF-3 on the Enhanced Fujita Scale. It demolished homes, but fortunately did not result in any fatalities.

As noted by WeatherUnderground’s Jeff Masters, this was the earliest that such a powerful tornado had occurred in the state since reliable records began in 1950.

The National Weather Service released a statement saying that Chicago and Rockford are on pace to "not only break... but shatter" their records for the warmest March.

Here are some of the noteworthy records set on March 15-17.