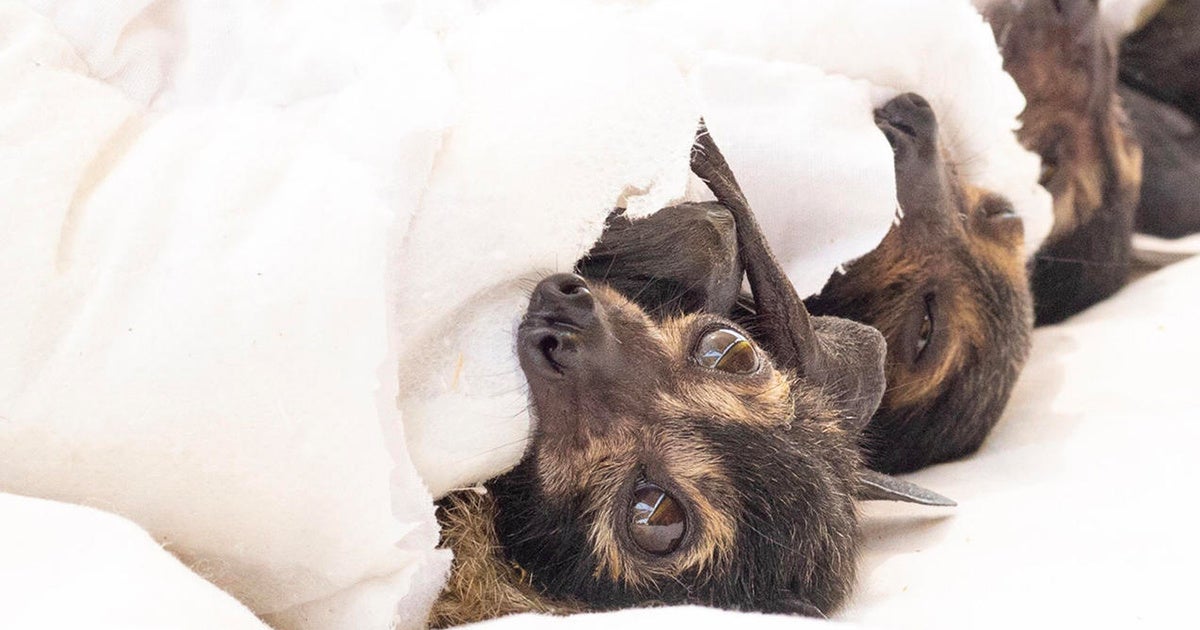 The November 2018 heat wave occurred at the start of the birthing season, leaving hundreds of orphaned flying foxes. David White

Weighing up to two pounds and with wingspans approaching five feet, spectacled flying foxes are among the largest bats in the world. Now imagine what it would be like if 23,000 of them fell out of the trees and onto, say, your car or backyard pool.

That’s what happened last November on the northern coast of Australia when a record-setting heat wave pushed temperatures past 107 degrees Fahrenheit for days on end. The spectacled flying foxes, which are accustomed to shady forest understories, tried to ride out the wave by fanning their wings, panting, and spreading saliva across their bodies, but these cooling measures can combat only so much heat. In the end, tens of thousands of these fruit bats fell to the ground dead. Hundreds more wound up in rehabilitation facilities. 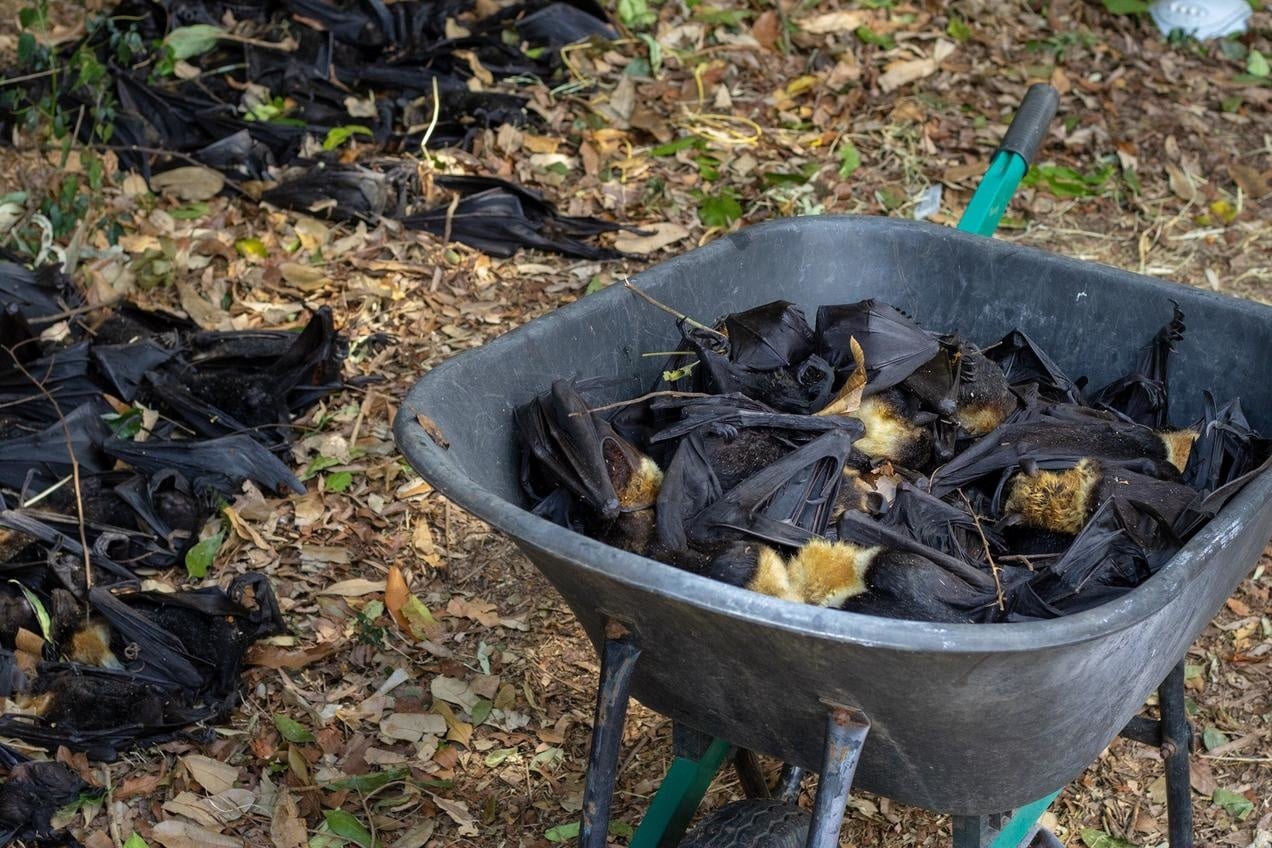 Wildlife volunteers removed thousands of bat carcasses from around Cairns, Queensland during a record-breaking heat wave.

“We have never seen die-offs in this species before,” said David Westcott, coordinator of Australia’s National Flying-Fox Monitoring Program. “Indeed, across the species’ range, we have rarely, if ever, seen temperatures like this before.”

Spectacled flying foxes — named for the yellow fur encircling their eyes — live in the forests of northeastern Australia, Indonesia, and New Guinea. Since November, severe heat waves have continued to hit Australia, killing fish along with wild horses and camels and even cooking fruit as it grew on trees. A 2014 heat wave in Queensland killed 45,500 bats of various species, including black, gray-headed, and little red flying foxes. And while scientists have found evidence of 39 such die-offs on the continent going back as far as 1791, the vast majority of those, 35, have occurred since 1994.

Anytime you’re talking about 23,000 animals falling dead, it’s clear that the scale of the problem is serious. But the number of casualties becomes even more significant when dealing with already endangered species. Previous estimates put the global population of spectacled flying foxes at just 75,000. November’s heat wave wiped out nearly a third of them.

Making matters worse, spectacled flying foxes have declined by 70 percent over the past 15 years, said Westcott, who is also a zoologist with the Commonwealth Scientific and Industrial Research Organisation in Canberra. This prompted the government to change the species’ conservation status from vulnerable to endangered under the country’s Environment Protection and Biodiversity Conservation Act of 1999, which is basically the Australian version of the Endangered Species Act.

The data used to reclassify the species, however, did not include the population’s recent massive loss. So the flying fox’s situation, Westcott said, could be even more tenuous than its “endangered” status suggests.

In addition to an increasingly warm climate, one of the biggest threats to spectacled fruit bats across Southeast Asia is urbanization and the conversion of forests to sugar plantations or pastureland for livestock. The animals rely on fruits, such as figs, and nectar from flowers, such as eucalyptus, to survive in the rainforests, swamps, and mangroves they call home. Deforestation obviously cuts into their food supply; disturbances in their native habitats also make it easier for invasive vegetation to creep in.

One such invasive plant is wild tobacco. The plant produces yellow berries that fruit bats will eat in a pinch, but the problem is that tobacco grows low to the ground. Flying foxes prefer life in the forest canopy, and for good reason. Foraging down low puts the bats in danger of picking up paralysis ticks, which, as their name suggests, carry a nasty toxin that can paralyze and sometimes kill bats and other animals. A 2013 study suggests these ticks affect females more than males. This is particularly bad news because flying foxes are already pretty slow at making babies.

Females don’t usually reproduce until after their first year and can bear only one pup each year. As the threats pile up on spectacled flying foxes — climate, habitat change, lethal ticks — the species becomes less and less likely to rebound.

Westcott said conservation efforts should focus on maintaining adequate understory in flying fox camps, or roosts. And depending on how dry the conditions are, providing supplemental water when the temperature gets high might help as well. 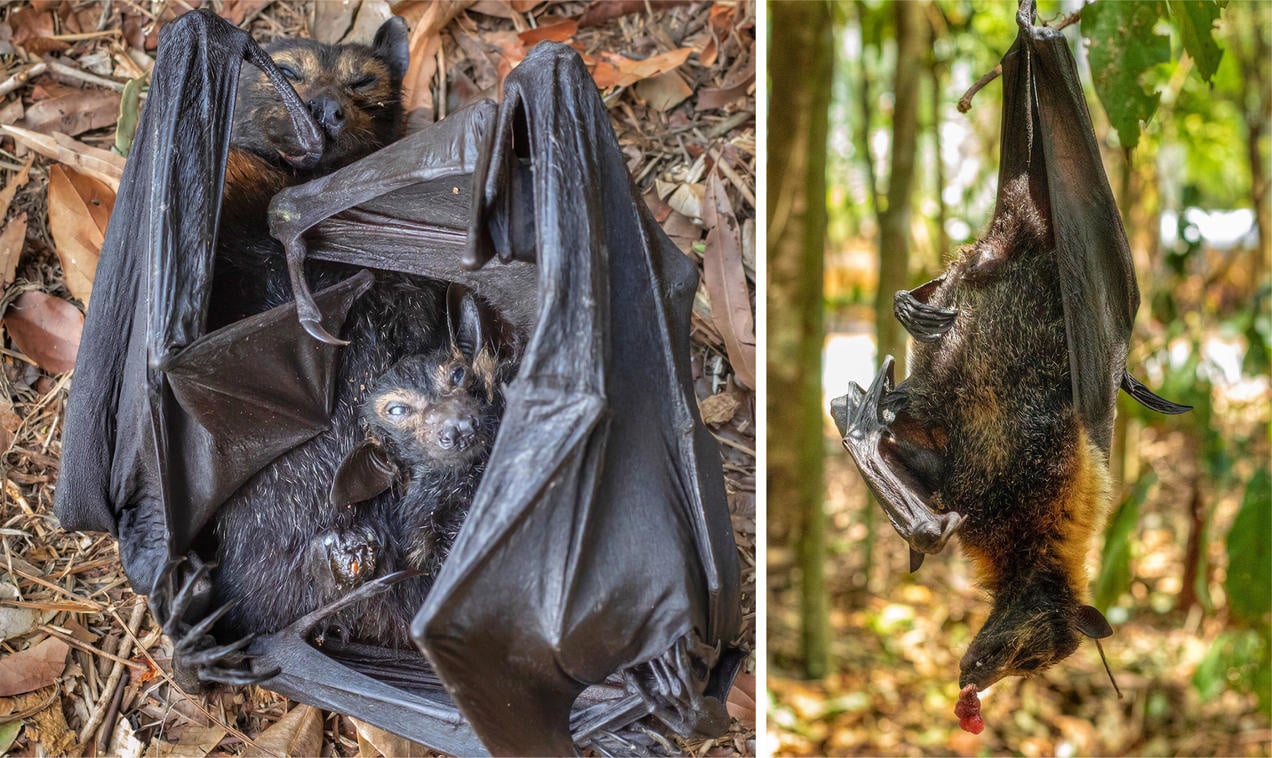 The flying-foxes died in the trees or dropped to the ground due to fatal heat stress.

Researchers at Western Sydney University have also developed something called the Flying-Fox Heat Stress Forecaster, which monitors weather patterns for the types of extreme heat known to cut down flying foxes. The early-warning system gives rehab centers, landowners, and wildlife managers around 72 hours of notice before a die-off might occur. This could be enough time to put out water and other resources that could save some of the animals.

The recent die-off, of course, is just part of a much bigger and more intractable problem. Since 2005, Australia has experienced 9of its 10 hottest years on record. The continent is now warmer in the day, warmer at night, warmer in its interior, and warmer on its coasts. Since the 1950s, the number of days when there’s risk of “extreme fire weather” has increased steadily. Dry areas are getting drier. Wet areas are getting wetter.