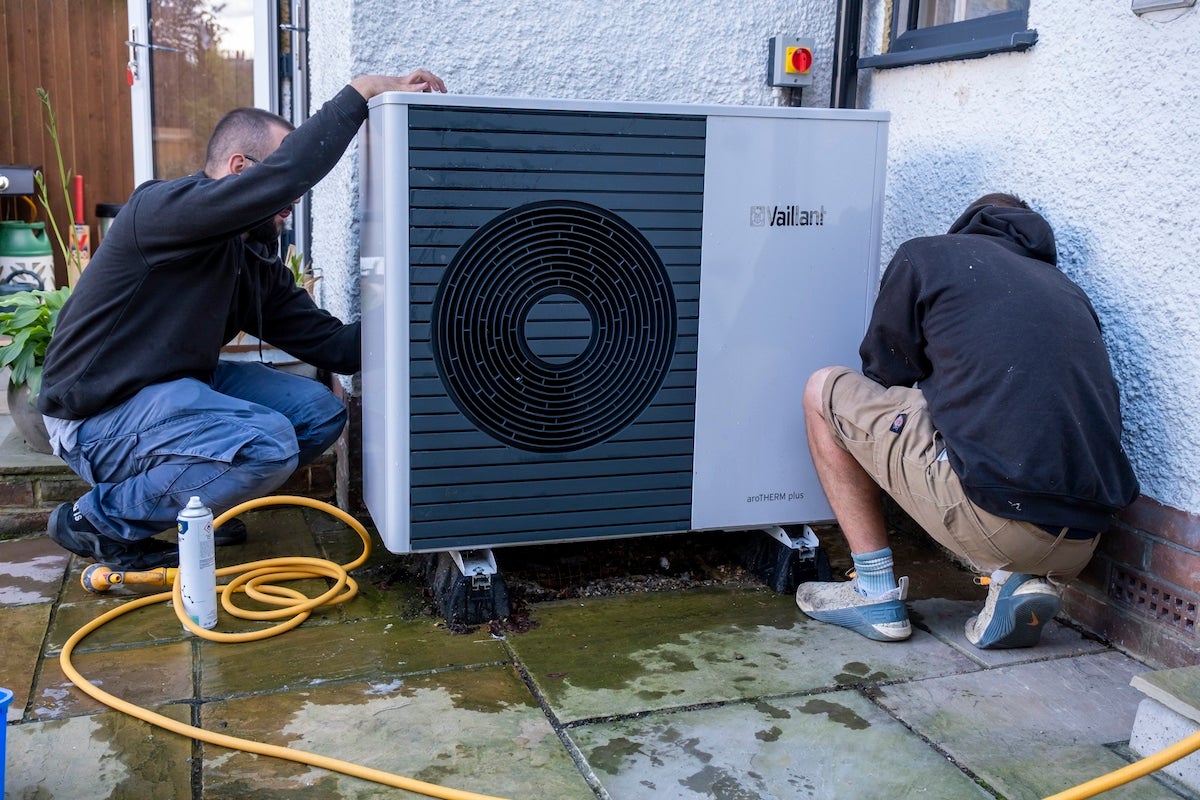 Technicians service a heat pump on a house in Folkestone, UK on Sept. 16, 2022. Andrew Aitchison / In pictures via Getty Images

One green technology that has gotten increased attention as the energy and climate crises converge is the heat pump.

Heat pumps are a device that either warms or cools a space not by generating heat like a furnace but by using electricity to transfer hot air to cool areas and vice versa. They are energy efficient and climate friendly, and their sales are surging, especially in Europe as the bloc seeks to heat its homes and buildings after Russia reduced the flow of gas to the region.

“Heat pumps are an indispensable part of any plan to cut emissions and natural gas use, and an urgent priority in the European Union today,” International Energy Agency (IEA) Executive Director Fatih Birol said in a press release announcing a new report on the device. “The technology is tried and tested, even in the coldest of climates.”

The report, The Future of Heat Pumps, calls the devices the “central technology in the global transition to secure and sustainable heating” when powered by low-emissions electricity. However, even when powered by the current mix of fossil and renewable electricity, they help reduce emissions from heating because they are three to five times more efficient than natural gas boilers, according to the report’s executive summary.

Currently, the heating of buildings accounts for 10 percent of global greenhouse gas emissions and around 10 percent of spaces were heated with heat pumps. However, the devices had a banner year in 2021, with global sales rising by almost 15 percent worldwide and about 35 percent in the EU. In 2022, they are set to see record sales and some European countries doubled sales during the first half of the year compared to the first half of 2021.

The EU especially has been under pressure to provide heat for its residents this winter following a reduction in Russian gas in response to sanctions imposed by the bloc following Russia’s invasion of Ukraine. However, embracing heat pumps would also enable the EU to meet its climate goals. If it does so, European heat pump sales could rise from two million in 2021 to seven million by 2030.

“Policy makers should be putting their weight behind this technology that is witnessing unprecedented momentum at the moment,” Birol said. “Heat pumps will be central to efforts to ensure everyone can heat their homes this winter and next, to protect vulnerable households and businesses from high prices, and to meet climate objectives.”

What’s good for Europe is good for the rest of the world as well. Overall, IEA calculated that, if governments meet their climate and energy security commitments, heat pumps would generate one fifth of space heating by 2030. If governments up their commitments in line with the Paris agreement goal of limiting global warming to 1.5 degrees Celsius above pre-industrial levels, heat pumps would meet a quarter of global heating needs by that date. The EIA calculated that heat pumps could reduce greenhouse gas emissions by at least 500 million tonnes by 2030, which would have the same effect as taking all gas-or diesel-powered cars off European roads.

Heat pumps are also part of the reason why energy efficiency increased by two percent this year compared to 2021, according to another IEA report released Friday. This is nearly quadruple the rate for the past two years and nearly double the rate for the past four, the agency wrote in a press release. Positive developments included three million heat pumps purchased in Europe, double the 1.5 million bought in 2019, and a U.S. Department of Health and Human Services rebate program for heat pumps, UPI reported.

“If the current rate of progress can be built upon further in the coming years, then 2022 could mark a vital turning point for efficiency, which is one of the key areas for international efforts to reach net zero emissions by 2050,” IEA said.

However, there are still barriers in the way of widespread adoption of heat pumps, the IEA noted in the heat pump report. These include the higher upfront costs of installing heat pumps, despite long-term savings; non-cost barriers like lack of information or outdated building codes; supply chain or manufacturing issues; and a lack of skilled installers. The IEA recommended several policy solutions including grants and tax rebates, regulation updates, national manufacturing targets and adding heat pump installations to current certification programs.

“All the pieces are in place for the heat pump market to take off, reminiscent of the trajectory we have seen in other key climate technologies like solar PV and electric vehicles,” Birol said in the press release. “Heat pumps address many of policy makers’ most pressing concerns on energy affordability, supply security and the climate crisis. Policy measures are in place today, but they need to be reinforced urgently to allow heat pumps fulfill their significant economic and environmental potential.”