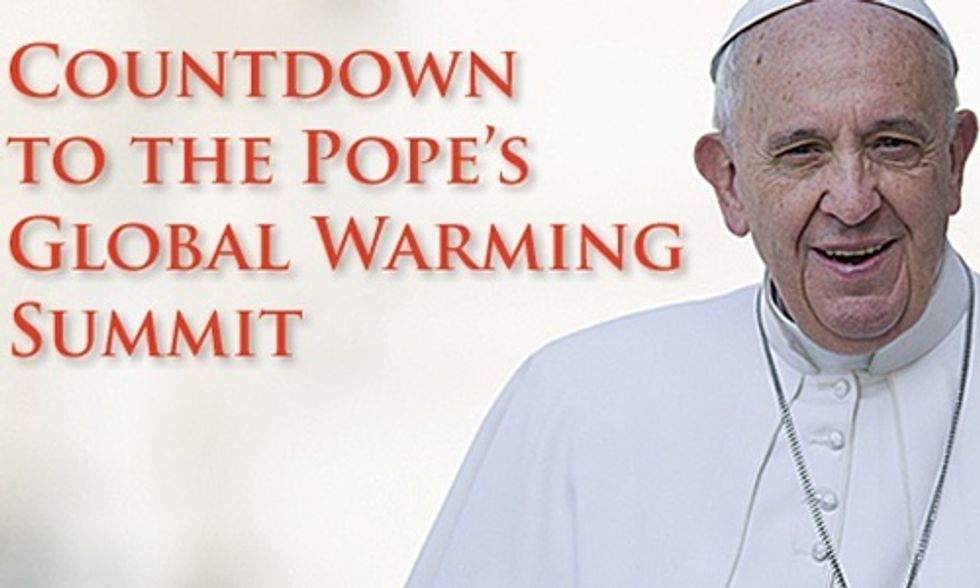 The Heartland Institute announced that they will be sending a delegation to the Vatican today and tomorrow to explain to Pope Francis "why climate science does not justify the Holy See putting its faith in the work of the UN Intergovernmental Panel on Climate Change (IPCC)."

That's right. They would like the Pope to reject the findings of the international body which merely assesses all of the world's peer-reviewed scientific literature—which is in overwhelming agreement that climate change is happening and humans are causing it—and then makes recommendations based off of that literature.

The Heartland Institute is sending the delegation as a "prebuttal" to the Vatican’s “Climate Summit,” which will take place on Tuesday. The reason they are bringing "real scientists," as they claim, is to "dissuade Pope Francis from lending his moral authority to the politicized and unscientific climate agenda of the United Nations," said the Heartland Institute.

UN Secretary-General Ban Ki-Moon and Harvard economist Jeffrey Sachs, both of whom will speak at the Pope's climate summit, "refuse to acknowledge the abundant data showing human greenhouse gas emissions are not causing a climate crisis and there is no need for a radical reordering of global economies that will cause massive reductions in human freedom and prosperity," says the Heartland Institute.

“The Holy Father is being misled by ‘experts’ at the United Nations who have proven unworthy of his trust,” said Heartland Institute President Joseph Bast. “Humans are not causing a climate crisis on God’s Green Earth—in fact, they are fulfilling their Biblical duty to protect and use it for the benefit of humanity. Though Pope Francis’s heart is surely in the right place, he would do his flock and the world a disservice by putting his moral authority behind the United Nations’ unscientific agenda on the climate," said Bast.

One of those who will speak at the "prebuttal" is Dr. E. Calvin Beisner, founder and national spokesman for

Beisner admits that carbon dioxide emissions are warming the planet, but says the impact is "so tiny as to be insignificant. "Trying to reduce our emissions will neither protect the earth nor dignify humanity." Beisner believes simulations by computer climate models are simply wrong and "the grave danger to the world, and especially to the poor, isn't global warming, but the poverty that would be induced or prolonged by policies meant to fight it," says Beisner.

Beisner, a seminary professor of historical theology and social ethics when he founded the Cornwall Alliance in 2005, received the "Outstanding Spokesman on Faith, Science, and Stewardship Award" from the Heritage Foundation at the Ninth International Conference on Climate Change last year. Beisner believes "Christian ethics requires protecting the poor from harm, since they lack the means to protect themselves."

"Requiring the world to abandon the abundant, reliable, affordable energy provided by fossil fuels in the name of fighting global warming oppresses the poor," says Beisner. "They desperately need that energy, and for now and the foreseeable future no other energy source can give it to them."

It will be very interesting to see what the Pope has to say about all of this. Pope Francis has consistently taken a strong stance on the need for immediate action on climate change, and at the same time, has been an ardent defender of the poor and marginalized. He evenly personally witnessed those on the front lines of climate change when he met with survivors of Typhoon Haiyan in the Philippines.

Do You Live in One of the 28 World’s Cleanest Cities?