Doctors to Gov. Wolf: For the Sake of Human Health Ban Fracking 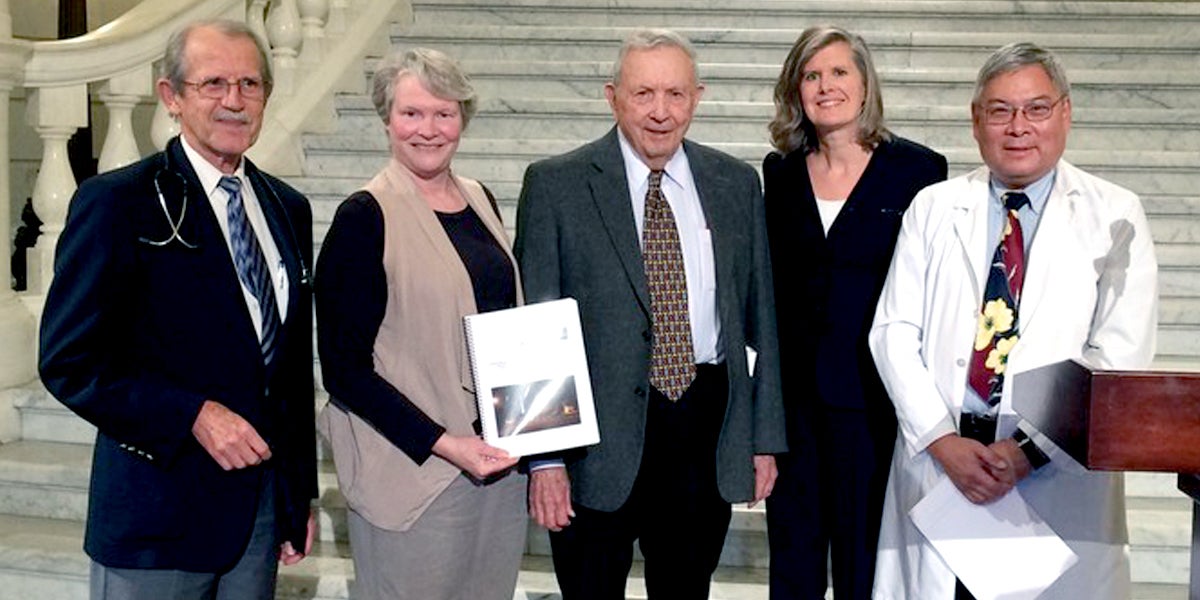 The Compendium of Scientific, Medical and Media Findings Demonstrating Risks and Harms of Fracking brings together findings and studies from scientific and medical literature, government and industry reports, and journalistic investigations.

“Scientific studies have demonstrated that drilling and fracking can increase risk of cancer, respiratory conditions and migraines in communities surrounding fracking sites. Fracking pollutes the air, water and land in nearby towns and cities, and has resulted in explosions and earthquakes. There are least 17 million Americans living within one mile of a fracking site, whose lives will be negatively impacted and potentially shortened, by fracking.”

There are now more than 900 peer-reviewed studies on the impacts of fracking, the vast majority of which indicate risks and adverse impacts. The new compendium includes summary and analysis of the trends in the scientific findings over the years.

“Each year, the empirical data yield increasing certainty that fracking is causing irrevocable damage to public health, local economies, the environment and to global sustainability,” Kathleen Nolan, MD, MSL, of Physicians for Social Responsibility and Concerned Health Professionals of New York, said. “The compendium, and especially this new, fourth edition, which has drawn from a wide range of scientific studies, investigative reports, and accident reports, only reinforces the desperate need for a moratorium on fracking.”

Three of the 12 major scientific trends identified in the compendium are that fracking threatens drinking water and that there is now proof of water contamination, that drilling and fracking emissions contribute to toxic air pollution and smog at levels known to have health impacts, and that public health problems associated with drilling and fracking, including reproductive health impacts and occupational health and safety problems, are increasingly well documented.

The compendium also contextualizes the issue of fracking in terms of the Paris climate agreement, noting how drilling and fracking significantly exacerbate climate change due to methane leaks and emissions and increasing reliance on fossil fuels.

With the release of the compendium, a group of doctors gathered in Harrisburg, Pennsylvania to hand-deliver it and more than 100 of the most recent studies—many about public health—demonstrating the harms of fracking to Gov. Wolf. Pennsylvania is the focus of many of the scientific studies, where drilling and fracking have been linked to widespread water contamination and health impacts.

The doctors and scientists felt the need to hand-deliver the recent studies because Gov. Wolf has not publicly commented on any of them, despite the fact that many of them have documented impacts in Pennsylvania and harms to Pennsylvania residents, reflecting the high volume of fracking taking place in the state. They called on the governor to heed the science and the recent call from the Pennsylvania Medical Society for a fracking moratorium.

“As the primary author of the Pennsylvania Medical Society’s resolution on a moratorium on new gas drilling, today’s new edition of the compendium only confirms why we should stop drilling,” said Walter Tsou, MD, former president of Philadelphia Physicians for Social Responsibility, past president of the American Public Health Association and former health commissioner of Philadelphia, and author of the Pennsylvania Medical Society’s unanimous resolution for a moratorium on fracking. “The scientific evidence only points to precaution in continuing this practice.”

Bob Little, MD, agrees. “In light of more than 900 scientific studies that overwhelmingly demonstrate risks and adverse impacts of drilling and fracking, Governor Wolf must implement a moratorium to stop the public health crisis that is occurring in Pennsylvania,” he said.

Since the release of the first edition of the compendium in July 2014, concerns about and opposition to fracking have grown. In December 2014, the New York State Department of Health released its own years-long review of the health impacts of fracking, which served as the foundation for a statewide ban, along with an environmental review finding significant impacts.

Following New York’s ban, Maryland overwhelmingly passed a two-and-a-half year moratorium on fracking. Internationally, both Scotland and Wales imposed moratoria on fracking in January and February 2015, respectively, and in July 2015 the Dutch government banned all shale gas fracking, joining a range of countries and provinces in prohibiting the practice including Bulgaria, France, Germany, Ireland, Netherlands and parts of Canada, Spain and Switzerland.

In June 2015, the U.S. Environmental Protection Agency released a draft version of its study of the impacts of fracking on drinking water. The agency found that fracking has polluted drinking water in several communities nationwide and identified several “potential mechanisms by which hydraulic fracturing could affect drinking water resources.”

And most recently, the Baltimore City Council just passed a resolution calling on the General Assembly to pass a statewide ban on fracking. A study from the Yale School of Public Health found specific fracking compounds to be tied to an increased risk of leukemia. In August, new research was released indicating that living near a fracking site is associated with increased rates of sinus problems, migraines and fatigue in Pennsylvania residents. A July 2016 Johns Hopkins study found that fracking was linked to increased asthma attacks in Pennsylvania.

Given the continuous growth in research, the compendium is designed as a living document that is publicly available on the websites for Physicians for Social Responsibility and Concerned Health Professionals of New York.