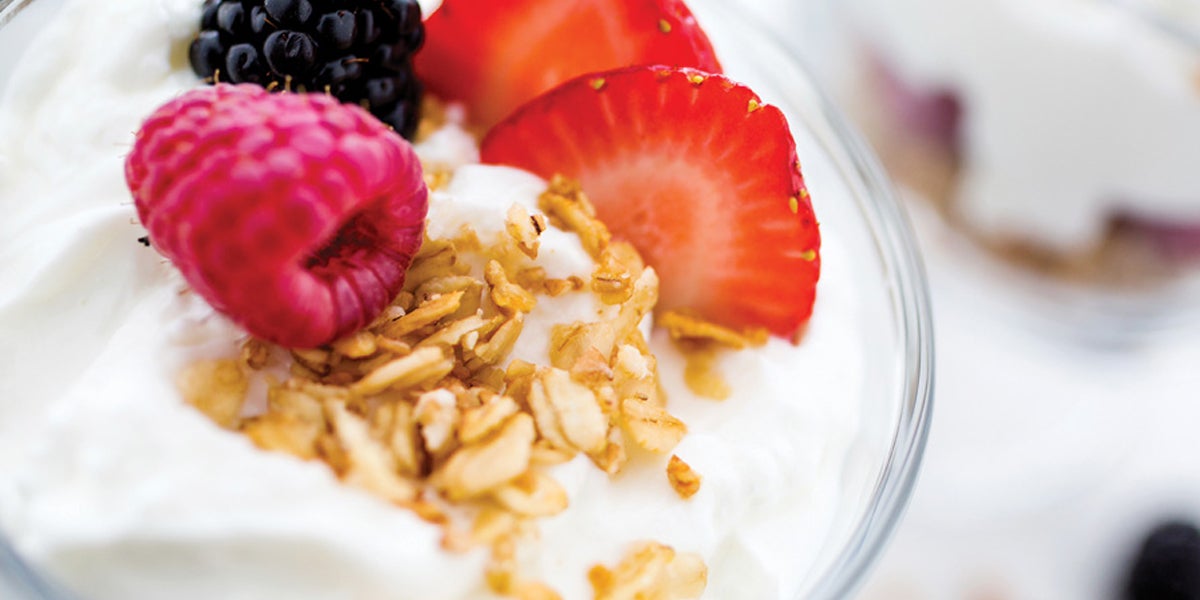 Greek yogurt is a thicker, creamier version of regular yogurt.

It has become an increasingly popular food, especially among the health conscious and is often promoted as a healthier choice than regular yogurt.

This article explores the health benefits of Greek yogurt and checks out how it compares to regular varieties.

What Is Greek Yogurt?

Greek or Greek-style yogurt has been strained to remove the whey.

Whey is the watery part of milk. It’s visible once the milk curdles or separates into liquid and solid parts.

To remove the whey and make Greek yogurt, regular yogurt is suspended over a bowl in a piece of fabric and allowed to rest.

It’s left for a few hours, so that the liquid whey drips through the fabric, leaving behind a thick and creamy Greek yogurt.

Despite being much thicker and richer (due to containing less liquid), it tastes very similar to regular yogurt.

In some countries, such as the UK, Greek yogurt is often called Greek-style yogurt.

This is because food labeling laws in these countries don’t allow products to be labeled as Greek unless they were made in Greece.

Summary: Greek yogurt has been strained to remove the liquid whey. It tastes like regular yogurt, but it has a thicker, creamier taste and texture.

What’s the Difference Between Greek and Regular Yogurt?

The whey that’s strained off when making Greek yogurt contains a lot of milk sugar (lactose).

Thus, the straining process not only changes the texture, but also some of the nutritional properties.

The chart below shows the nutritional breakdown of 3.5 ounces (100 grams) of Greek yogurt compared to the same amount of regular yogurt (1, 2):

Summary: Greek yogurt is higher in protein, fat and calories than regular yogurt. It’s also lower in carbs and slightly lower in calcium.

Greek yogurt is highly nutritious and may offer some great health benefits. Below are five awesome reasons to add it to your diet.

Greek yogurt contains 9 grams of protein per 3.5 ounces (100 grams), which is three times the amount found in the same amount of regular yogurt (1, 2).

Eating enough protein has been linked to many health benefits, including improved body composition, increased metabolic rate and reduced hunger (3, 4, 5, 6).

In fact, including a source of protein at meals and snacks has been shown to help you feel fuller for longer, which could help you eat fewer calories (7, 8, 9).

This means that Greek yogurt could be beneficial for people who want to eat more protein, especially if they are trying to lose weight.

Greek yogurt is made by removing the whey, which contains some lactose or milk sugar.

This can be useful for people who are trying to limit their lactose consumption or follow a lower-carb diet.

However, if you are trying to eat less sugar, be aware that some flavored Greek yogurts can contain added sugar.

3. It’s Good for Your Gut and Your Health

Like regular yogurt, Greek yogurt can contain good bacteria that may benefit your health, particularly your digestive health (10, 11).

These good bacteria are also known as probiotics and they work by changing the balance of bacteria in your gut (12).

A better balance of gut bacteria has been linked to improved digestion, enhanced immune function and a reduced risk of many diseases, including obesity (13).

To verify that your Greek yogurt contains probiotics, make sure the label says “contains live and active cultures.”

Like regular yogurt, Greek yogurt is a source of vitamin B12.

Vitamin B12 is an essential nutrient that you need to get from your diet.

It’s involved in many important functions in your body, including red blood cell production and the proper function of your nervous system and brain (14).

Dairy products like yogurt can be an important source of vitamin B12, especially for vegetarians, who eat dairy (15).

Lactose is the main sugar found in milk. Some people have a condition called lactose intolerance, which is characterized by the inability to digest lactose well.

Most people with this problem can tolerate small amounts of lactose in their diet.

However, eating too much lactose can result in unpleasant digestive symptoms, such as bloating, gas and pain.

Given that the process of making Greek yogurt may remove most of its lactose-containing whey, it can be a better choice for people with lactose intolerance.

Summary: Greek yogurt is high in protein and vitamin B12, yet low in sugar and lactose. It may also promote a healthy digestive system.

Are All Greek Yogurts the Same?

Like regular yogurt, not all Greek yogurts are the same. This is because different processing methods and added ingredients can change the nutritional profile.

They May Contain Additional Ingredients

One of the key features of Greek yogurt is its thick and creamy texture.

This is usually achieved by straining yogurt and slowly draining off the whey. This process can take around four hours.

Some manufacturers shorten the processing time by adding thickeners, such as whey protein powder or starch. This can result in a product that contains additional ingredients, such as whey concentrates and modified corn starch.

Additionally, some Greek yogurts contain added flavorings, which may increase their sugar content.

While differences in production methods won’t affect the protein and fat contents of the final product, they could affect the lactose content.

Greek yogurt made the traditional way has been strained for a long period of time and is naturally low in lactose.

However, those that have added thickeners often haven’t been strained as long.

This means that they contain more of the lactose-containing whey, which could make them more likely to cause a problem in people with lactose intolerance.

If you’re worried about the lactose content, choose a lactose-free brand or look for Greek yogurts that only list milk and live cultures as the ingredients.

Some brands of Greek yogurt contain more protein than others.

This can be due to differences in the straining methods used during the production process or may occur if extra protein is added during the thickening process.

To find out how much protein your Greek yogurt contains, simply check the label.

The fat content of Greek yogurt can also vary, depending on the amount of fat in the milk used to make it.

This is usually easy to spot, as Greek yogurt made with low-fat or non-fat milk will be labeled accordingly.

Technically, all Greek yogurt should be vegetarian-friendly. However, some companies add gelatin (an animal collagen) to it to improve its texture.

To be sure your product is vegetarian-friendly, check the nutrition label.

Summary: Greek yogurts can vary in their manufacturing process, ingredients and nutritional value. To be sure of the contents, check the label.

How to Eat Greek Yogurt

Greek yogurt is a versatile food that can be used in a number of ways, including:

Summary: Greek yogurt is exceptionally versatile. You can eat it on its own or use it as an ingredient in snacks, baked goods or meals.

Should You Choose Greek or Regular Yogurt?

Both regular and Greek yogurt can be part of a healthy, balanced diet.

This means that if you are trying to increase the protein content of your diet or are following a low-carb diet, Greek yogurt may be a better choice.

That said, all yogurts can contain added ingredients, including sugar.

To pick the healthiest Greek yogurt, be sure to choose one that has milk and live cultures listed on the food label—and little else.

To learn more about choosing a healthy yogurt, here is a complete guide.