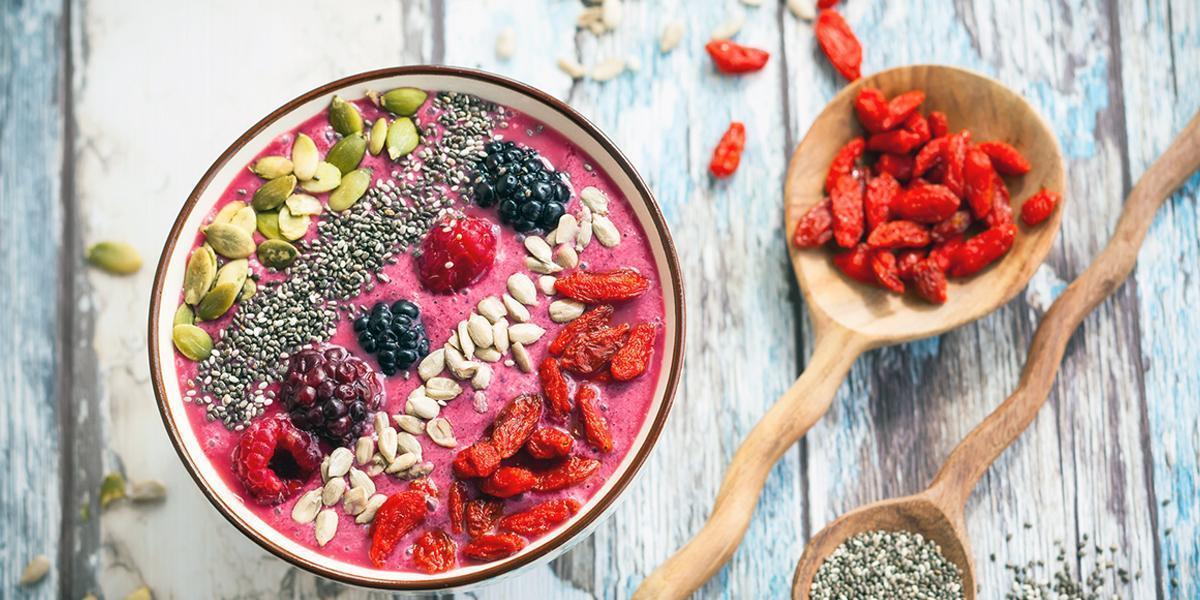 Goji berries have gained popularity in recent years, often promoted as a “superfood.”

They’re thought to help prevent premature aging, boost the immune system, have benefits for diabetes and protect against heart disease and cancer (1).

But do they really live up to the hype? This article explores nine benefits of goji berries that are actually backed by science.

What Are Goji Berries?

Goji berries, scientifically known as Lycium barbarum, are also known as wolfberries, fructus lycii and gougizi. These dried red berries have been used in traditional Chinese medicine for more than 2,000 years (2).

They have a sweet taste and can be eaten raw or consumed as a juice or herbal tea. They can also be taken as extracts, powders and tablets.

All dark blue or red berries, including goji berries, contain high levels of antioxidants, which may help protect the body against damage from free radicals.

What’s unique about goji berries is that they contain specific antioxidants called Lycium barbarum polysaccharides, which are thought to provide a variety of impressive health benefits.

Read on for 9 evidence-based health benefits of goji berries.

The nutritional content of goji berries is thought to vary widely depending on the type, freshness and how they’re processed.

In addition, they are packed full of powerful antioxidants, including carotenoids, lycopene, lutein and polysaccharides. In fact, polysaccharides make up 5–8 percent of dried goji berries (5).

By weight, these berries contain about as much vitamin C as fresh lemons and oranges (5).

For a fruit, goji berries are relatively high in protein and fiber, two nutrients that may help keep you fuller for longer.

A 100-gram serving of goji berries provides around 11 grams of protein, compared to just 1 gram of protein in every 100 grams of blueberries or raspberries (4, 6, 7).

These minerals are essential to the function of all your organs, protecting your cells and helping optimize metabolism (8).

Summary: Goji berries are very nutritious. They are high in fiber, protein and a range of vitamins and minerals including iron, copper, selenium and vitamins A and C.

Antioxidants protect against free radicals, which are harmful molecules that can damage your cells.

Goji berries have a high oxygen radical absorbance capacity (ORAC) score of 3,290. This rating indicates the quantity of antioxidants in certain foods.

Keep in mind that ORAC values are determined in test-tube studies, so these fruits may not necessarily have the same effects in the human body. However, there is other evidence that goji berries can boost antioxidant levels in humans.

Antioxidant markers increased by more than 8 percent among 50 healthy adults who drank 4 ounces (120 ml) of concentrated goji berry juice a day, compared to those who did not drink the juice (10).

One study in healthy elderly men and women found that taking a milk-based goji berry drink daily for 90 days increased levels of the antioxidant zeaxanthin by 26 percent and increased overall antioxidant capacity by 57 percent (11).

This is good news, since antioxidants consumed through the diet are thought to be important for health and protection against chronic diseases (12).

3. May Have Anti-Aging Benefits

Antioxidants like those in goji berries may help fight aging by preventing free radicals from damaging collagen in the skin (13).

Some small studies have also shown that goji berry extract may help delay the aging process in cells.

One study in mice showed that goji berry extract inhibits glycation, a process that ages the skin (14).

Consuming a wide range of foods high in antioxidants is thought to help protect against premature aging.

These preliminary results are promising, but human studies are needed.

Summary: Goji berry extract has been shown to protect against cell damage in test-tube and animal studies. This may protect against premature aging, but more research is needed in humans.

Goji berry extract has been linked to anti-cancer activity in both animal and human studies (16).

Test-tube studies have shown that goji berry extract hinders the growth of cancer cells, preventing them from spreading and even destroying them (17, 18).

One study in rats found that a regular diet of goji berries inhibited the progression of cancerous tumors. Raspberries, strawberries, blueberries, noni fruit and açaí berries were equally effective (19).

The potential tumor-inhibiting effects of goji berries are likely due to their ability to boost levels of antioxidants and reduce levels of inflammatory cytokines IL-5 and IL-8 in the blood (19).

A study in 79 people with advanced cancer found that those who were given immunotherapy plus concentrated goji extract experienced a 25 percent higher rate of cancer regression compared to those who received immunotherapy alone (20).

These anti-cancer effects are likely due to the antioxidants found in goji berries.

Nevertheless, keep in mind that most of these studies used only extracted and concentrated parts of the berries, not just goji berries alone.

Summary: Goji berry extract may inhibit or slow down the growth of cancer cells and may even actively destroy them.

Animal and test-tube studies have shown that goji berry extract may have positive effects on blood sugar control (21, 22, 23, 24, 25).

One study gave goji berry polysaccharide extract to rats with type 2 diabetes for four weeks. The researchers found that blood glucose levels decreased in nearly 35 percent of the rats (23).

These positive effects on blood sugar are strongly linked to the antioxidant activity of goji berry extract.

Studies in this area have shown that goji berry extract promotes insulin sensitivity by increasing the absorption of glucose into cells through the transporter molecule GLUT4 and by boosting insulin secretion by the pancreas (26).

However, these studies are limited to animals, so it’s not clear if humans would experience the same positive effects. More research in humans is needed.

Consuming concentrated goji berry extract or juice has been linked to improved energy and feelings of overall well-being.

When mice were given goji berry extract, they adapted more quickly to particular exercises. They also showed improved performance and better recovery after an exercise test (27).

It’s thought that goji berry extract could enhance the creation of muscle and liver glycogen, a storage form of glucose that helps you maintain physical activity.

It may also speed up the clearance of blood urea nitrogen, a waste product your body produces after strenuous exercise (27).

As a result, they reported increased energy, better exercise performance, improved quality of sleep and reduced stress and fatigue compared to before they began consuming the juice. They also reported feeling happier and more content (28).

7. May Help You Lose Weight

Goji berries have certain properties that may make them weight loss friendly.

For example, they are high in fiber, which can help control blood sugar and appetite, helping you feel full for longer (29).

The GI value for a particular food or drink indicates the effect it will have on your blood sugar levels once you eat it.

There is some evidence that goji berry juice may aid in weight loss by increasing metabolic rate.

One study found that when healthy overweight men and women consumed a single 4-ounce (120-ml) dose of concentrated goji berry juice, their ability to burn calories after one hour was 10 percent greater than in those who didn’t consume the juice (31).

When participants consumed goji berry juice over 14 days, their waist circumference decreased by an average of 1.9 inches (4.7 cm) compared to the control group (31).

However, these studies are small and more research needs to be done to determine if consuming goji berry juice definitely results in weight loss.

Animal studies have shown that taking goji berry extract may have positive effects on cholesterol levels.

When rabbits with high cholesterol were treated with goji berry extract for 10 days, their total cholesterol and triglyceride levels decreased and their “good” HDL cholesterol increased (23).

The authors of the study suggested the improved cholesterol levels were likely caused by the antioxidant polysaccharides and vitamins in the goji berry extract.

In another study, when diabetic rats consumed 10 mg of goji berry extract daily for three weeks, they showed decreased triglyceride levels and cholesterol (25).

9. May Help Boost the Immune System

Some animal studies support these findings, showing that goji berry extract enhanced the production of T-lymphocytes (34).

Summary: Goji berry extract may help boost the immune system by increasing the white blood cells responsible for protecting the body against harmful bacteria and viruses.

Are They Really as Healthy as People Say?

Goji berries are packed with many vitamins, minerals and antioxidants.

Nevertheless, more human studies are needed. Most of the benefits also seem associated with concentrated juice or purified extracts, both of which have higher levels of active compounds than you would get from fresh or dried goji berries.

In addition, goji berries and their products can be costly.

Overall, it makes sense to include them as part of an overall healthy diet involving a range of other fruits and vegetables. 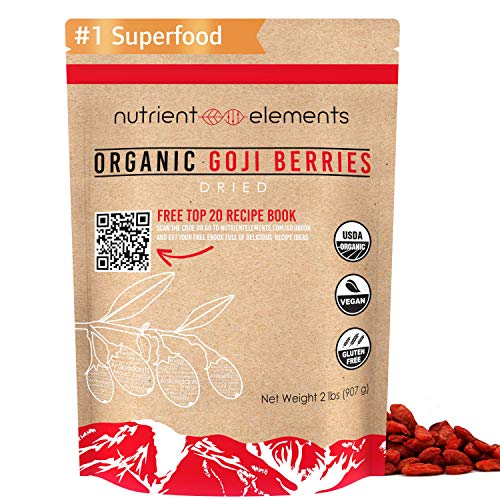