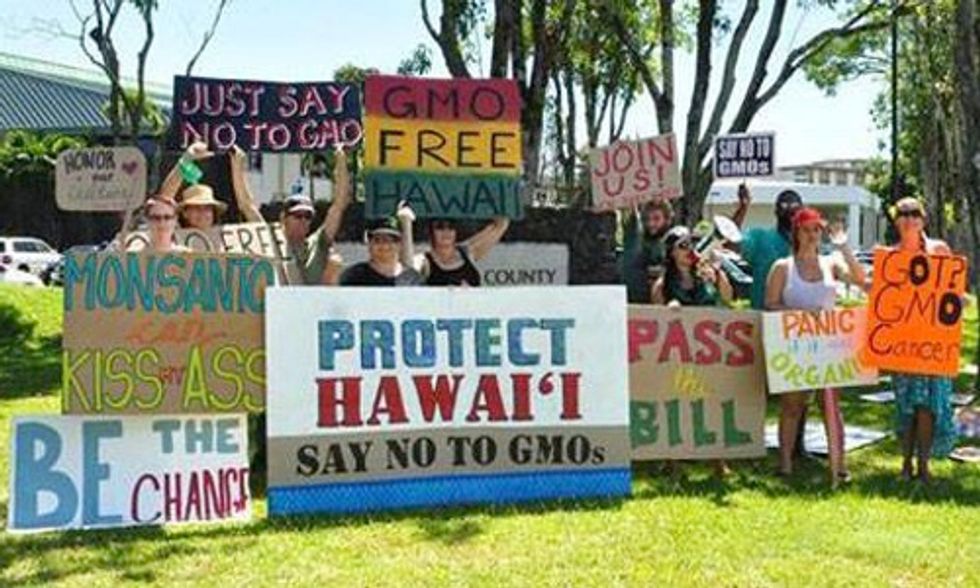 The Big Island of Hawaii has a new law that bans biotech companies, as well as all open-air growing of genetically modified organisms (GMOs).

The bill exempts papayas and other GMO crops currently being cultivated and includes fines of $1,000 a day for violators.

Mayor Billy Kenoi hasn’t indicated his stance on the bill, but he has 10 days to veto it. The county council could override a veto with a vote from six members.

"WOOHOO! WE DID IT!" read the Facebook page of GMO Free Hawaii Island. "We ask for your continued support on the following two items: Write a letter to thank our council members for protecting the health of our community and Hawaii's agricultural lands, and encourage Mayor Billy Kenoi to sign Bill 113 into law."

Supporters of the measure filled the council chambers at the West Hawaii Civic Center with applause after the vote late Tuesday, according to the Hawaii Tribune-Herald.

"We are at a juncture," Councilwoman Margaret Wille, who introduced the bill, told Honolulu Civil Beat. "Do we move forward in the direction of the agro-chemical monoculture model of agriculture, or do we move toward eco-friendly, diversified farming?

Farmers supporting the bill said they fear cross-pollination between modified and non-modified crops, which they say can hurt or even close their markets.

Papayas were exempted in the Big Island bill because most of the 200 papaya plantations in Hawaii are planted with genetically engineered trees. A team of scientists modified the DNA of the papaya in the 1990s to withstand a devastating ringspot virus.

Large biotech companies like Syngenta, Monsanto, Pioneer, Dow and BASF have long been experimenting with GMO crops and seeds in Hawaii. They have farms on the islands of Oahu, Kauai and Molokai, but they've never operated on Hawaii's Big Island.

The world’s biotech giants have set up shop in Hawaii in recent years, attracted by year-round growing conditions and an ecosystem favorable for testing and growing produce such as seed corn. The biotechnology industry has all but completely supplanted the sugar cane and pineapple industries that used to dominate the Hawaiian landscape.

Anne Lopez, spokeswoman for the Attorney General’s Office, said earlier this fall that the office has no plans to weigh in on the Big Island's proposed ban or challenge it if it’s adopted.

“We have not analyzed it to come up with a legal opinion,” she said.

In 2008, the county adopted a ban on GMO coffee and taro that has not been legally challenged.