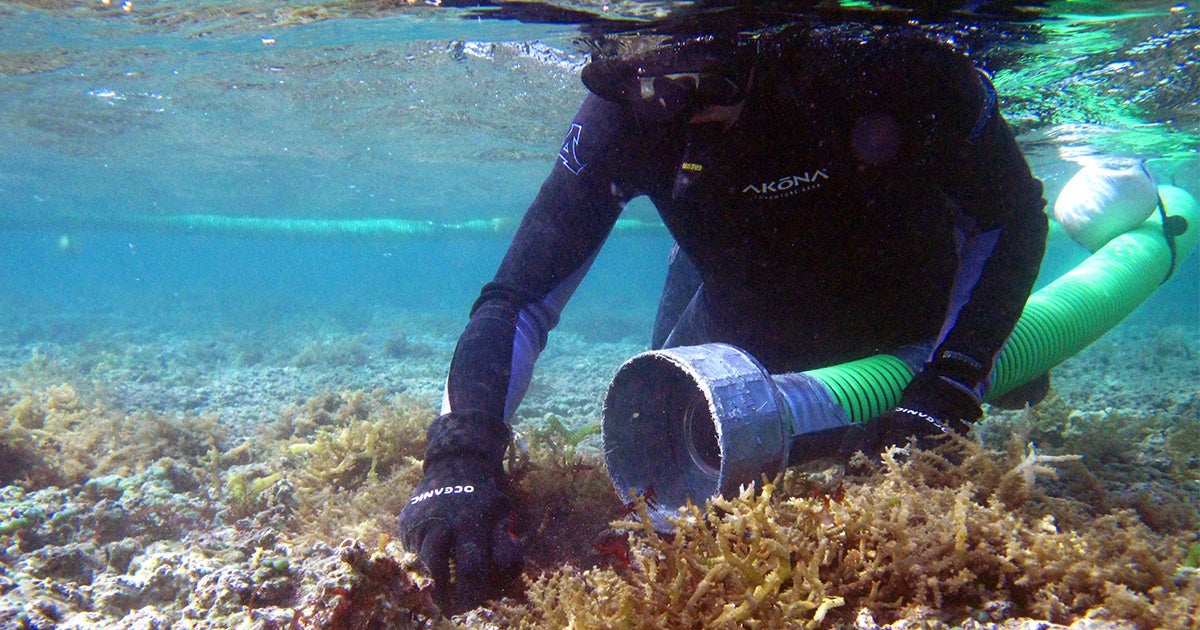 A combination of removing macroalgae with an underwater “Super Sucker” vacuum and introducing juvenile sea urchins to feed on the remaining algae reduced the amount of algae on a reef off of Oahu, Hawaii by 85 percent, the researchers found.

“This management approach is the first of its kind at the reef-scale,” study author and University of Hawaii Hawaii Institute of Marine Biology (HIMB) doctoral candidate Chris Wall said in the university press release. “Our research shows promise as an effective means to reduce invasive macroalgae with minimal environmental impact, while also incorporating a native herbivore to regulate a noxious invasive species.”

The combined approach removed more than 40,000 pounds of invasive algae, “outplanted” 99,000 native collector sea urchins and freed almost six acres of reef over a two year period, according to The University of Hawaii.

“The surprise was just how effective this approach was at reducing invasive macroalgae over the two-year period,” Wall said.

Few large-scale attempts to remove the algae, which limits biodiversity on the reef by smothering coral, monopolizing the ecosystem and competing with native species, had proven successful in the past, according to the abstract of the study published Aug. 8 in the journal PeerJ.

But the new method isn’t just good for ocean ecosystems. It also can benefit the land. The algae collected by the Super Sucker has a second life as fertilizer for local farmers, according to DAR.

The Super Sucker consists of a long hose attached to a pump system housed on a nearby barge. Divers feed the algae into the hose, which sucks it up to the barge where it can be sorted, bagged and delivered to farmers.

Macroalgae is rich in nutrients and is used on plants like taro and sweet potato. It is also high in potassium and thought to be an effective insect repellent.

The successful removal of the reef-smothering algae means Hawaii’s coral reefs have one less thing to worry about, given the risk posed to coral worldwide due to climate change related problems like ocean acidification and coral bleaching.

“Coral reefs are an important part of the economy, culture, sustenance and recreation of Hawaii,” study author and DAR acting administrator Brian J. Neilson told the University of Hawaii. “Local action is instrumental in supporting the resilience of coral reefs. This study provides an important tool that can assist in the management and conservation of coral reefs.”