Has the USDA Approved Poultry Imports From China? 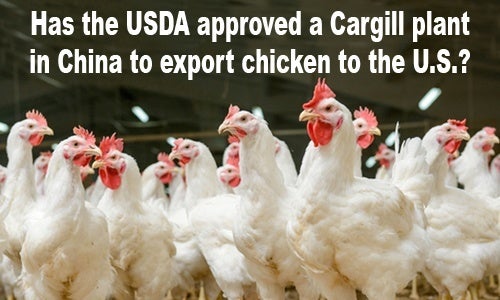 Is a Cargill poultry plant in China poised to export meat to the U.S.? That question lies at the heart of a controversy sparked by an Aug. 13 article on wattagnet.com that reported that a Cargill plant in the Anhui province had been cleared by the U.S. Department of Agriculture (USDA) to export poultry meat to the U.S. because USDA’s Food Safety and Inspection Service (FSIS) had recently granted equivalency status to the poultry food safety inspection system there. 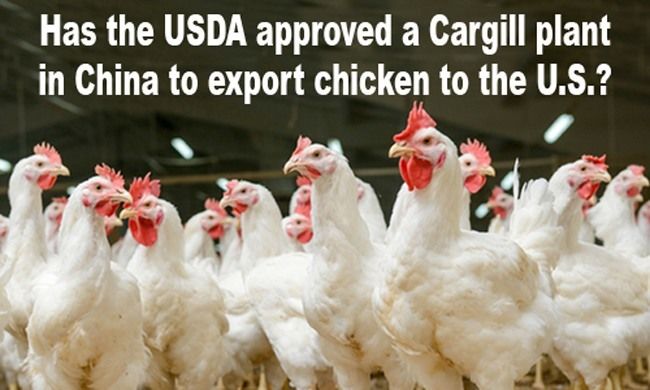 According to the article, the Cargill plant had met the U.S. export requirements for poultry meat. In response to the report and conflicting comments from FSIS, the national advocacy organization Food & Water Watch sent a letter to USDA Sec. Tom Vilsack demanding that he clarify the situation.

We were astonished and disturbed to read that a decision had been made by the USDA to clear Cargill to export poultry to the U.S. We have been following this issue for nearly a decade and FSIS has not proposed a rule to permit China to export its own poultry to the U.S. Even though FSIS claims that the story is inaccurate, it has not asked for a retraction, suggesting to us that there may be some veracity to the story’s content. That is why we are demanding answers from USDA Sec. Tom Vilsack.

Food & Water Watch has contacted editorial staff at WATT publishing asking whether FSIS or Cargill had requested a correction or retraction; they indicated that none had been received. The story remains online despite the fact that FSIS officials claim it is inaccurate.

FSIS conducted an audit of China’s poultry inspection system in May. The report for that audit has not been posted by FSIS. At the present time, China is restricted to exporting processed poultry to the U.S. provided that the raw poultry comes from a handful of countries—the U.S., Canada, Chile and Israel. Only a new rule, subject to public comment, would allow China to export its own poultry meat to the U.S.

Meanwhile, country of origin labeling is under siege at the World Trade Organization (WTO) and in Congress. Consumers want to know where their food comes from, particularly if it’s from a country with notoriously lax food safety standards. If ever there were a situation where consumers would want to know the origin of their food, imported poultry from the People’s Republic of China would top that list. We hope Sec. Vilsack can shed some light on this situation.