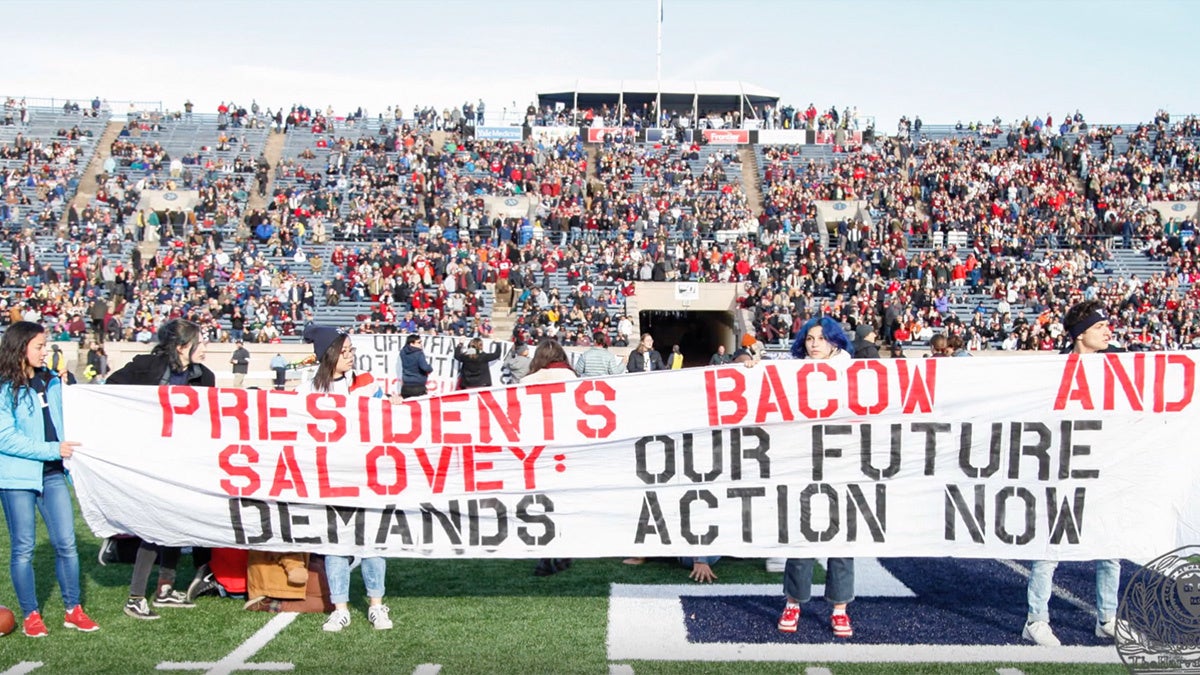 Students, staff and alumni from Yale and Harvard put aside a famous rivalry Saturday to call for action on the climate crisis when hundreds of them interrupted the annual football game between the two Ivy League schools, delaying it for nearly an hour.

The protesters called on the two universities to divest their combined endowment of more than billion from the fossil fuel industry and from companies that hold Puerto Rican debt. Around 150 demonstrators initially rushed the field at the end of halftime, but organizers said they were joined by hundreds of other fans from the stands, NPR reported. At one point, according to The Washington Post, 500 people were on the field.

“That moment, when we saw people running onto the field was just really incredible,” Harvard senior and protest organizer Caleb Schwartz told NPR. “I saw organizers around me crying because it was such a beautiful moment.”

The protesters, who were mobilized by the groups Fossil Free Yale, the Yale Endowment Justice Coalition and Fossil Fuel Divest Harvard, carried banners with messages including “Nobody wins. Yale and Harvard are complicit in climate injustice.” The majority stayed on the field long enough to delay the TV broadcast of the game, The Guardian reported. Most of the protesters then left the field of their own free will, and a few stayed to face arrest. Forty-two were issued misdemeanor summons, Yale officials told The Washington Post.

The protest delayed the second half of the game long enough that it occurred close to sunset, which made a difference because the Yale Bowl does not have floodlights. In the end, Yale won 50 to 43, moments before it became too dark to continue playing.

Some attendees expressed frustration with the demonstrators.

“They’re all supposed to be intelligent people. It looks like there’s a lot of common sense that has missed their generation,” 68-year-old Chuck Crummie told The Washington Post. “It goes to show that this generation is all about themselves and not a football game.”

Director of university media relations at Yale Karen N. Peart also expressed disappointment with the timing of the protest.

“We stand with the Ivy League in its statement that it is regrettable that the orchestrated protest came during a time when fellow students were participating in a collegiate career-defining contest and an annual tradition when thousands gather from around the world to enjoy and celebrate the storied traditions of both football programs and universities,” she said in a statement to NPR.

But the demonstrators had the support of many of the players themselves. Several Harvard players wore orange wristbands as a show of solidarity, according to a press release.

“Harvard and Yale can’t claim to truly promote knowledge while at the same time supporting the companies engaged in misleading the public, smearing academics, and denying truth,” captain of the Harvard Crimson football team Wesley Ogsbury said in a video supporting the action. “We’re coming together to call upon President Bacow and President Salovey to divest from the fossil fuel industry now … for the sake of our generation.”

Students have been trying to persuade Harvard and Yale to divest from fossil fuels since 2012, according to The Guardian. Harvard has outright refused to divest, while Yale has said it would consider the climate crisis in investment decisions, NPR explained. However, the school refused to divest from fossil fuels completely, and chief investment officer David Swensen said “we would all die” if fossil fuel production were to cease now, according to The Washington Post.

In their press release, the demonstrators said they felt direct action was their only option for changing university policy.

“For seven years, the university administrations have refused to engage in real dialogue and instead stalled and silenced student voices. We’ve attempted to go through the official channels. It hasn’t worked,” Josie Ingall, Yale ’23, said.