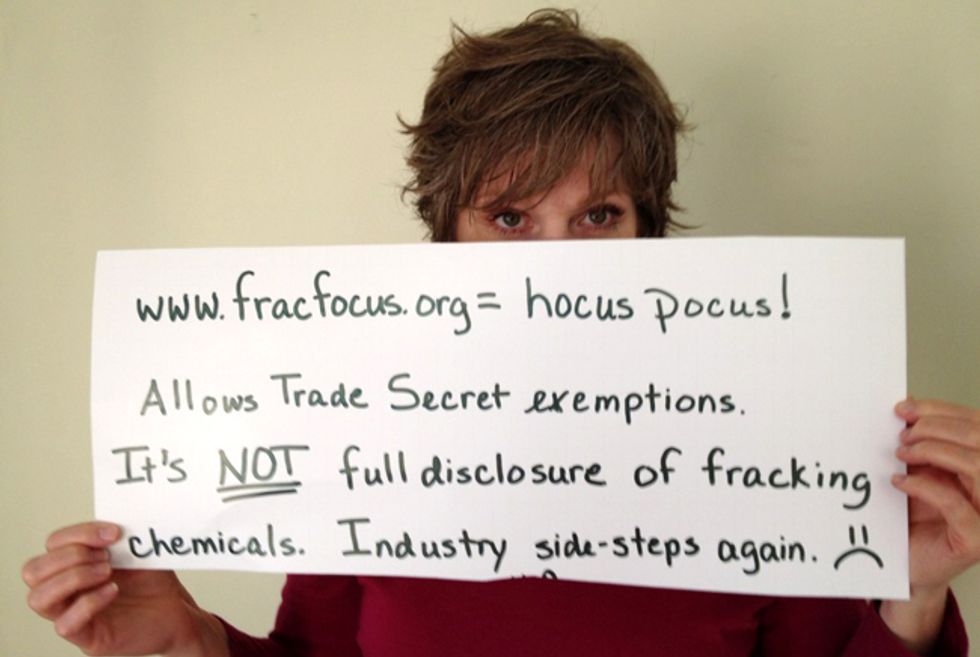 A message from TXsharon.

Thanks to two great stories by E&E’s Mike Soraghan, we know that the Harvard Law School has evaluated FracFocus.org and found government (and the public) shouldn’t rely upon it.

In short, Harvard says FracFocus is inadequate for at least three reasons:

In sum, Harvard says that FracFocus allows for disclosure on the fracking company’s terms without much regard for the community’s right to know. And the end product is inconsistent and unreliable.

Additionally, FracFocus makes retrieving the data much more difficult than it needs to be, as SkyTruth demonstrated by scraping the data and putting it into a much more public-friendly tool.

Thanks to loopholes in federal environmental laws, frackers have been free to inject toxic-containing frack fluid through a community’s water table without disclosing them to the impacted community.

As the shale boom progressed, this ability caused increasing outrage to the point that it looked like meaningful disclosure might be required—perhaps even by the federal government.

In part to head off the possibility of federal involvement, gas development states and industry—working with enviros, including Earthworks—drafted and enacted disclosure requirements. Wyoming was first, followed by Texas.

During this time, industry funded the creation of FracFocus.org, which is administered by Ground Water Protection Council. Many states that require fracking disclosure, specifically require it through FracFocus. And the federal government is considering incorporating FracFocus into disclosure for fracking on Bureau of Land Managment lands as well.

State-based disclosure has come up short

As Harvard demonstrates, FracFocus has come up short as a fracking disclosure tool.

Unfortunately, the state interpretation of disclosure regulations is lacking as well. For example, Earthworks and other enviros are now suing Wyoming state government—which started as a trend-setter—for not properly implementing their fracking regulations.

Taken together, the inadequacies of state fracking disclosure implementation and FracFocus serve as a strong argument that disclosure should be required at the federal, not state, level. And were fracking treated like almost every other industry, that would already be the case.