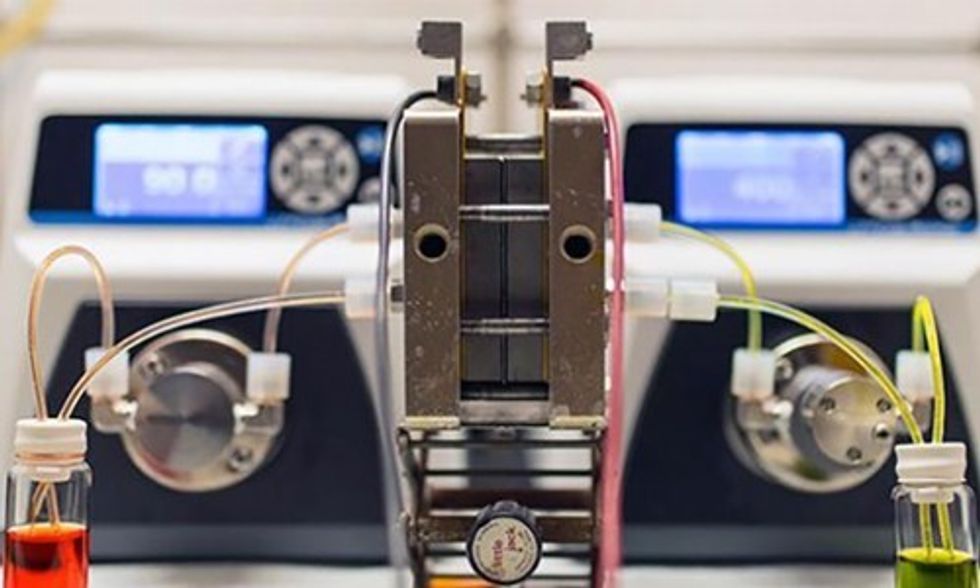 The dream of a home battery—cheap, durable, safe and as big as you like—that could store solar or wind power is a step nearer reality.

Researchers from Harvard University in the U.S. report that they have tested a “flow battery” that uses cheap and abundant chemical elements, can be operated with plastic components, will not catch fire and can operate at 99 percent efficiency.

Such batteries could be used to save and store surplus wind and solar power, which could then be used at times when neither form of renewable energy can deliver.

The latest advances are based on technology already tested by the same engineers, but made more attractive with a switch to chemical components that are non-toxic, non-flammable and safe for use in homes and offices.

Typically, flow batteries have exploited a metal, such as vanadium, dissolved in acid to deliver electrical action.

Kaixiang Lin, a chemistry student at Harvard, Michael Marshak, now assistant professor of chemistry at the University of Colorado, Boulder and colleagues report in Science journal that, instead of costly and difficult-to-handle metals, they have tested naturally-occurring, carbon-based molecules called quinines for the negative electrolyte component of the battery.

They had started their experiments with bromine-based electrolyte for the positive ions, but bromine is toxic and volatile. So they replaced it with a non-toxic, non-corrosive ion called ferrocyanide.

“It sounds bad because it has the word cyanide in it,” Dr Marshak says. “Cyanide kills you because it binds very tightly to iron in your body. In ferrocyanide, it’s already bound to iron, so it’s safe. In fact, ferrocyanide is commonly used as a food additive and also as a fertilizer.”

The combination of a common organic dye and a cheap food additive in alkaline, rather than acidic solutions, meant that the researchers could increase their battery voltage by 50 percent.

It also means—at least in principle—that a domestic residence could store its own surplus solar or wind power and keep the refrigerator or the central heating running after sunset or on windless days. How much a house could store would depend only on the size of the tanks that held the two electrolytes.

“This is chemistry I’d be happy to put in my basement,” says Michael Aziz, a professor of materials and energy technologies at Harvard, who has led the research. “The non-toxicity and the cheap, abundant materials placed in water solution mean that it’s safe. It can’t catch fire—and that’s huge when you are storing large amounts of electrical energy anywhere near people.”

The storage problem has consistently been held against investment in solar and wind energy, but a safe, cheap and capacious technology could change the economics of renewable power generation.

Paradoxically, another group of researchers from the same university have, in the same week, argued that the storage shortfall might be a non-problem.

Hossein Safaei and David Keith, of the School of Engineering and Applied Sciences at Harvard, report in the Energy & Environmental Science journal that the supply of wind and solar power could be increased tenfold without any additional storage.

Even though wind and solar power deliver energy intermittently, relatively-low carbon gas turbines and zero-carbon sources—such as nuclear, hydropower and biomass—could be used to make up the shortfall.

They are not the first to argue this. At least one group has calculated that the U.S. could get 99 percent of its energy from zero-carbon sources.

“We’re trying to knock out a salient policy meme that says you can’t grow variable renewables without a proportionate increase in storage,” Professor Keith says.

“We could cut electric sector carbon emissions to less than a third of their current levels using variable renewable, with natural gas to manage the intermittency. But this will require us to keep growing the electricity transmission infrastructure.”