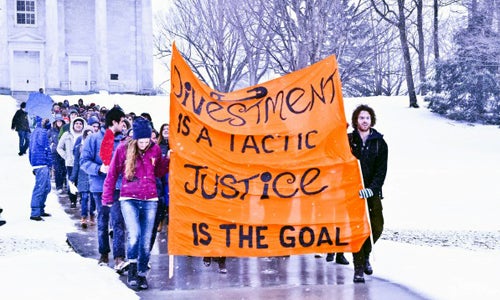 At a time when institutions of business and government continue to fail society, two of our leading academic institutions missed the opportunity to provide essential moral leadership on the most pressing challenge ever faced in the history of human civilization.

She and her colleagues on the Board do not believe “that university divestment from the fossil fuel industry is warranted or wise.”

“Our consideration of divestment [from coal] is over.”

Both statements, read in their entirety, explain the careful and thorough deliberations that took place within their respective academic communities. That these institutions can both fail to see the stark moral implications of their decision after such extensive deliberation only reinforces the severity of the crisis facing civilization. 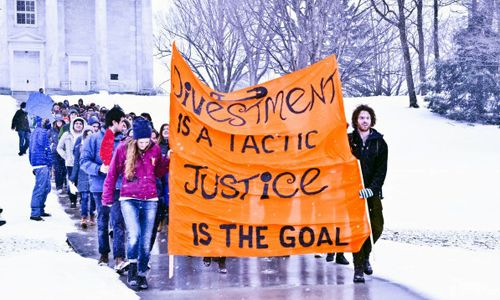 Divestment is no panacea and, as a stand-alone strategy, not likely to be effective in changing the investment decisions of the world’s energy industry. But until we properly define climate change as the greatest moral challenge of all time we will not take the bold steps we need to take. This photo was taken on the Middlebury College campus, where officials opted not to divest from fossil fuels this fall. Photo credit: Paul Gerard

Before looking at the rationales of these decisions, let us remind ourselves of the unprecedented challenge before us. Thanks to a paper released in 2009 by the highly respected Potsdam Institute for Climate Impact Research, we have known for four years a staggering truth: if we are to avoid blowing through the 2 degree warming threshold and ushering in likely catastrophic climate change, we must leave the majority of the fossil fuels already discovered and on the books, beginning with coal, in the ground.

The Carbon Tracker Initiative brought this issue into common focus two years ago. At that time, we described a $20 trillion “Big Choice” facing society, anticipating OECD Secretary General Angel Gurria’s recent statement: “The looming choice may be either stranding those assets or stranding the planet.”

Beyond the shrinking lunatic fringe of climate change deniers, there is no apparent debate regarding this stark choice, only a judgment call around what is an acceptable degree of certainty we should shoot for in our quest not to destroy the planet for life as we know it. On this question, the scientific community is far too timid given all the non-linear risks they understand but shy away from talking forcefully about, on the pretext that such risks are by definition “uncertain.” The financial crisis made us aware of the growing prevalence of Black Swan events and their consequences in complex systems. The global climate system is a complex system that makes finance appear simple in comparison. It’s time to connect the dots.

With this as context, let us turn to the failures of moral leadership at Harvard and Brown. Harvard’s decision rests on two arguments. First, Harvard is an academic institution and its endowment is held in trust to advance its academic mission. No argument. But then the rationale against divestment heads down its slippery slope by asserting a false choice between “the University as a political actor rather than an academic institution.”

The toxic political climate in the U.S. has successfully defined climate change as a “political issue” pitting “business-friendly conservatives” against “wimpy green liberals” and both sides trapped in their worship at the alter of economic growth (no matter the costs). It is certainly conceivable that such lazy and reckless thinking has infected Harvard’s own Corporation Board.

Let us be clear: climate change is a moral issue, not a political issue. Would the President of Harvard assert that the choice of the most prestigious University in the world is between being an academic institution or a moral actor (rather than a “political actor”)?

After asserting its false choice between academics and politics, Harvard then reveals the crux of the matter. Divestment will come “at a substantial economic cost.” It is reasonable to debate both the costs of divestment and the risks of not divesting (stranded asset risk), but that is not the point. Any hard moral choice by definition comes with very real costs. That is why it is so vital for us all as individuals, and certainly for our leading academic institutions, to be clear on issues of morality.

Brown University’s decision was focused simply on divesting from coal, both mining and electricity generation from coal. The students who organized Brown Divest Coal apparently were trying to make it easier for the board, since divesting from coal and tar sands oil production are the relative “no brainers” from both a moral and an economic risk perspective.

One can feel Brown President Christina Paxson’s struggle to explain her board’s decision (which she tells us she “agrees with,” although I have my doubts) as she delicately walks the reader through Brown’s “guidelines for incorporating ethical and moral issues into investing.” Those guidelines have supported previous divestiture decisions such as Brown’s 2003 decision to divest from tobacco companies.

Unlike Harvard, Brown recognizes climate change as a moral issue, and Brown has “guidelines” for incorporating ethical and moral issues into investment decision-making. Brown is at least a decade ahead of Harvard it would appear in that regard; as part of their non-divestment decision the latter announced the hiring of their “first-ever vice president for sustainable investing.”

Brown’s failure lies not in recognizing climate change as a moral issue, but in how they consider whether the social harm caused by burning coal is “sufficiently grave” to warrant divestment. Tobacco passed that test because there were no offsetting benefits that tobacco enables. In considering coal divestment, Paxson writes, “Although the social harm is clear, this harm is moderated by the fact that coal is currently necessary for the functioning of the global economy.”

Let’s substitute “slavery” for “coal” in that statement and see how it reads.

As I have written in “Beyond Divestment” and elsewhere, divestment is no panacea and as a stand-alone strategy, not likely to be effective in changing the investment decisions and business models of the world’s energy industry. But until we properly define climate change as the greatest moral challenge of all time, affecting not just our fellow man, but all of mankind now and forever, and all of life as we know it on planet Earth, which is our gift, we will not take the bold steps we need to take, now.

Consider the ongoing costs of what was our failed moral leadership for far too long on the “energy system” of slavery. Now, on the 150th anniversary of the Gettysburg Address, let us be inspired by the courage of Abraham Lincoln’s leadership. He endured great costs personally and on behalf of the nation he led for a moral clarity devoid of convenient or self-serving rationalizations in the face of entrenched and wrong ideology.

Now consider November’s climate injustice of Typhoon Haiyan with a 20-foot storm surge, nearly twice as high as what Hurricane Sandy delivered to the New York metropolitan area. Naderev Sano, the Philippines delegate to the U.N. Climate talks in Warsaw in November, in a desperate search for moral leadership, announced he would fast “until we stop this madness.”

“Those who have the privilege to know, have the duty to act.” – Albert Einstein

Harvard and Brown have let us down.