Harnessing the Sun's Energy for Water and Space Heating 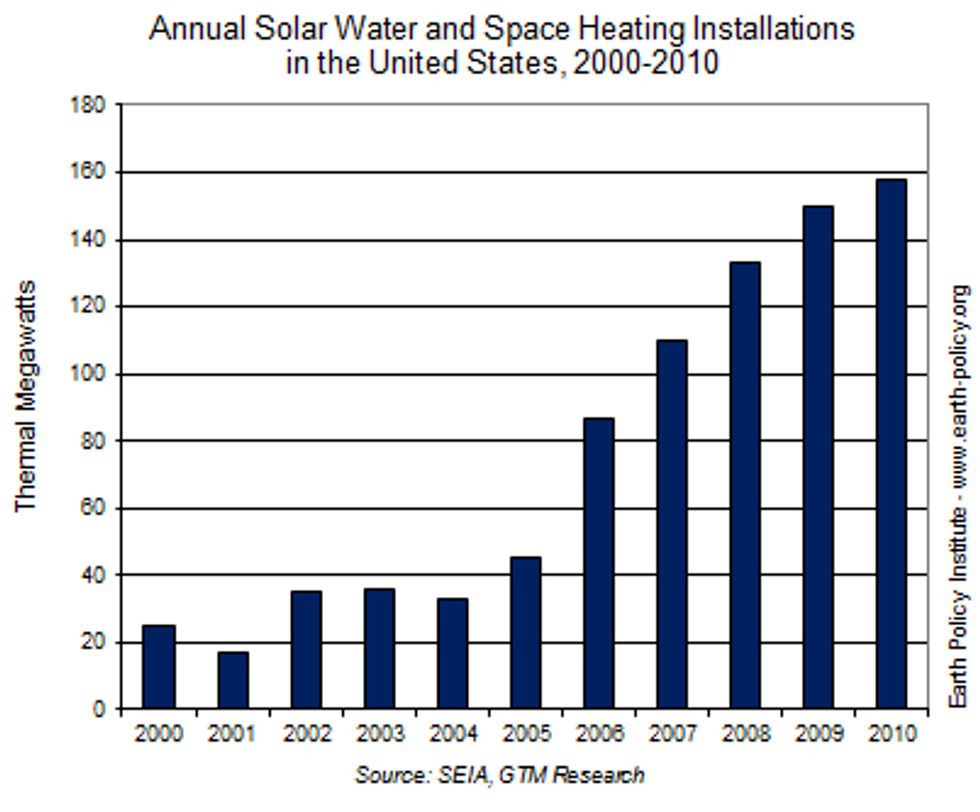 The pace of solar energy development is accelerating as the installation of rooftop solar water heaters takes off. Unlike solar photovoltaic (PV) panels that convert solar radiation into electricity, these "solar thermal collectors" use the sun's energy to heat water, space or both.

China had an estimated 168 million square meters (1.8 billion square feet) of rooftop solar thermal collectors installed by the end of 2010—nearly two thirds of the world total. This is equivalent to 118,000 thermal megawatts of capacity, enough to supply 112 million Chinese households with hot water. With some 5,000 Chinese companies manufacturing these devices, this relatively simple low-cost technology has leapfrogged into villages that do not yet have electricity. For as little as $200, villagers can install a rooftop solar collector and take their first hot shower. This technology is sweeping China like wildfire, already approaching market saturation in some communities. Beijing’s goal is to reach 300 million square meters of rooftop solar water heating capacity across the country by 2020, a goal it is likely to exceed.

Other developing countries such as India and Brazil may also soon see millions of households turning to this inexpensive water heating technology. Once the initial installment cost of rooftop solar water heaters is paid back, the hot water is essentially free.

In Europe, where energy costs are relatively high, rooftop solar water heaters are also spreading fast. In Austria, 15 percent of all households now rely on them for hot water. Germany is also forging ahead. Some 2 million Germans are now living in homes with rooftop solar systems. Roughly 30 percent of the installed solar thermal capacity in these two countries consists of “solar combi-systems” that are engineered to heat both water and space.

The U.S. rooftop solar water heating industry has historically concentrated on a niche market—selling and marketing more than 9 million square meters of solar water heaters for swimming pools between 1995 and 2005. Given this base, the industry was poised to mass-market residential solar water and space heating systems when federal tax credits were introduced in 2006. Led by Hawaii, California and Florida, annual U.S. installations of these systems have more than tripled since 2005.

Inspired by the rapid adoption of rooftop water and space heaters in Europe in recent years, the European Solar Thermal Industry Federation (ESTIF) has established an ambitious goal of one square meter of rooftop collector for every European by 2020. Over the long term, ESTIF estimates that solar thermal has the potential to meet most of the region’s low-temperature heating needs.

Numerous policies promoting renewable energy use for water and space heating exist around the world. Some governments have gone a step further, passing laws requiring solar water heaters in new construction. For a quarter-century, Israel was the only country to have a national mandate for solar hot water in buildings. Then in 2006, Spain began requiring that solar collectors be installed on all new or renovated buildings. Portugal followed quickly with its own mandate. In the U.S., Hawaii now requires that all new single-family homes have them.

Solar water and space heaters in Europe and China have a strong economic appeal, often paying for themselves from electricity savings in less than 10 years. With the cost of rooftop heating systems declining and more countries implementing favorable policies, the shift from fossil fuels to solar energy for heating water and space will likely accelerate.

For more data and information on the rapid growth of renewable energy worldwide, see World on the Edge by Lester R. Brown at www.earth-policy.org.