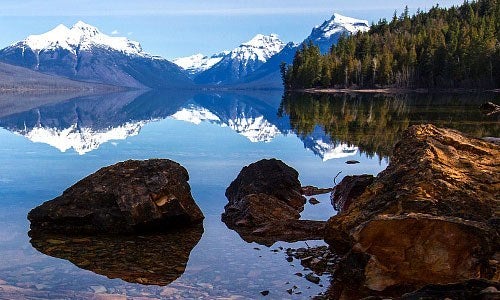 On Aug. 25, 1916, President Woodrow Wilson signed the Organic Act, which created the National Park Service (NPS), a federal bureau within the Department of the Interior designated to protect and maintain the 35 national parks and monuments under the supervision of the department at the time. Today, there are 408 national parks covering more than 84 million acres of land across the U.S. To commemorate the day, the National Parks will be offering free admission to each of the 408 parks.

“The National Park Service’s 99th birthday is an opportunity to reflect on and celebrate the role of national parks in the American story,” said National Park Service Director Jonathan Jarvis. “And it’s also a time to look ahead to our centennial year, and the next 100 years. These national treasures belong to all of us, and we want everyone—especially the next generation of park visitors, supporters and advocates to discover and connect with their national parks.”

Earlier this year, the NPS kicked off the Find Your Park campaign, a social media and marketing movement to connect the parks to the millions of Americans that don’t know about them or have yet to visit one of their national parks. The largest advertising campaign in national parks history utilizes technology to encourage Americans to engage and interact with their local national parks, leading them to discover and explore even more.

#19 Stand on a mountaintop – #FindYourPark from the top of Mount Dana at 13,053 feet! http://t.co/qGFTruIyQK pic.twitter.com/D64AxBl3Iy

The NPS is also relying on corporate sponsors to assist with promotion. Brand USA, established by the 2009 Travel Promotion Act to improve declining international tourism to the U.S., is partnering with Expedia and MacGillivray Freeman Films to produce a Giant Screen Film about the national parks, “National Parks Adventure.”

The film, narrated by Robert Redford, is slated for release in February 2016, coinciding with the centennial year of the National Park Service. The film showcases over thirty national parks and will be shown in many of the 800 IMAX theatres located in sixty countries around the world.

“The International tourism industry provides thousands of jobs for Americans. The national parks are a great asset in showcasing the variety of tourism opportunities to foreign, as well as domestic, tourists,” says Brand USA SVP of Global Partner Marketing, Tom Garzilli. “We want people to visit America more often and stay for longer periods. We hope to generate audiences of 8-10 million people for this film in order to share the inspiring story of America’s national parks.”

The film also chronicles the camping trip, which set the foundation for the establishment of the National Park Service. From May 15 to May 18, 1903, President Theodore Roosevelt visited John Muir, widely regarded as the father of the national parks, in Yosemite. Muir pleaded to Roosevelt to set aside Yosemite and other lands for the establishment of parks to preserve these pristine wildernesses. Roosevelt obliged and during his presidency set aside five national parks, 18 national monuments, 55 national bird sanctuaries and wildlife refuges, and 150 national forests.

Roosevelt said of Yosemite, “There can be nothing in the world more beautiful than the Yosemite, the groves of the giant sequoias … our people should see to it that they are preserved for their children and their Children’s children forever, with their majestic beauty all unmarred.”