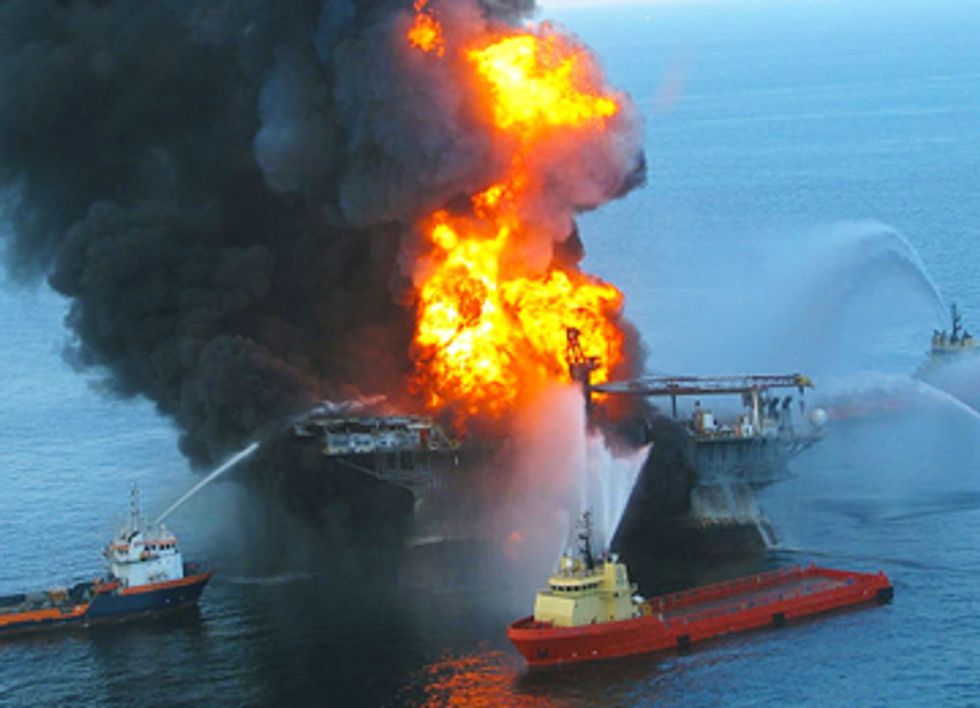 The 2010 BP Oil Spill is considered the largest accidental marine oil spill in the history of the petroleum industry. It spilled approximately 210,000,000 U.S. gallons of oil into the Gulf of Mexico, and the initial explosion, caused by faulty cementing around the injection well, killed 11 workers.

During an internal probe into the this cementing after the blowout, Halliburton ordered workers to destroy computer simulations relating to safety measures. The U.S. Department of Justice announced Thursday that Halliburton has agreed to plead guilty to the destruction of this evidence.

This charge—knowingly destroying evidence during a government investigation in an attempt to cover up the cause of 11 human deaths and one of the largest disasters in the country’s history—is considered a “misdemeanor” charge. Halliburton is required to pay a $200,000 fine.

Tim Probert (right) of Halliburton is sworn in along with officials from BP and Transocean before May 11 Senate hearings on the Gulf oil spill. Photo credit: Tim Sloan/AFP/Newscom.

In 2011, Halliburton Co. took in $24.8 billion in revenue—that’s roughly $67.9 million per day, or $2.8 million per hour, or $47,000 per minute. In four and a half minutes they made enough to pay the total fines for destroying evidence of their criminal negligence.

Halliburton has also agreed to make a $55 million donation to the National Fish and Wildlife Foundation, presumably as a sign of good faith. Though this may make it easier for politicians to claim that the world’s second-largest oilfield services company—a company that made $39.5 billion dollars on the Iraq War—cares about you, Halliburton clearly had their own interests in mind. On page five of the U.S. Fish and Wildlife Service’s “Vision for a Healthy Gulf of Mexico Watershed,” the Fish and Wildlife Service refers to wild animals as “resources” and makes it clear that they are more interested in economy than ecology:

“The natural resources in the five Gulf states are the foundation of a multibillion dollar economic engine that employs more than 8 million people, produces more than half of America’s crude oil and natural gas, and accounts for the majority of the nation’s annual shrimp and oyster harvest. Hunting, fishing, bird-watching and other wildlife-dependent recreation contributes more than $25 billion annually to the region’s economy … Over the last century, climate change, sea level rise, habitat conversion and fragmentation, decreasing water quality and quantity and invasive species have diminished the resiliency of the Gulf of Mexico ecosystem … Natural disasters like hurricanes and man-made disasters like oil spills exacerbate these impacts. As a result, native fish and wildlife populations and their habitats are in decline, imperiling the very fabric that supports the Gulf Coast’s vibrant economy.”

Former Vice President Dick Cheney, who previously served as the CEO of Halliburton, once said “We have to make America the best place in the world to do business.” I’m sure Halliburton, BP, the Fish and Wildlife Service and the Department of Justice can all agree on that."