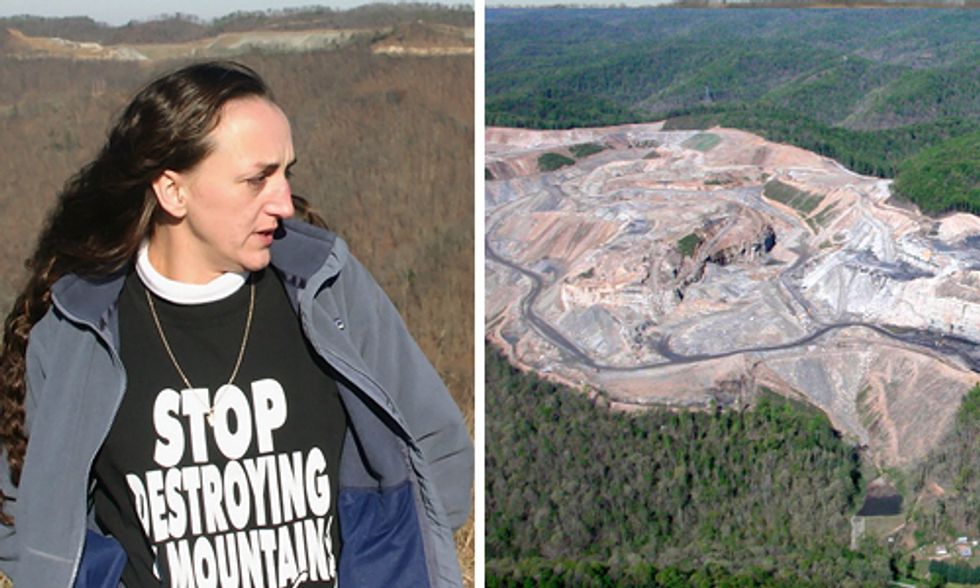 In a breathtaking but largely overlooked ruling this week, a federal judge agreed that the U.S. Army Corps of Engineers may disregard studies on the health impacts of mountaintop removal mining in its permitting process, only two weeks after Goldman Prize Award-winning activist Maria Gunnoe wrote an impassioned plea to President Obama to renew withdrawn funding for U.S. Geological Survey (USGS) research on strip mining operations and redouble federal action to address the decades-old humanitarian disaster.

(Gunnoe's full letter is below.)

"We all must recognize and resolve these mountaintop-removal-caused health problems and end the onslaught of pollution on people. Ending mountaintop removal could be as simple as passing HR 526," said Maria Gunnoe (right).

The prophetic call for immediate federal action by Gunnoe, a community organizer for the West Virginia-based Ohio Valley Environmental Coalition and a long-time witness to the tragedy of mountaintop removal, has never been so timely."Appalachian citizens are the casualties of a silent “war on people” who live where coal is extracted," Gunnoe wrote the President. "Citizens of all ages are dying for the coal industry’s bottom line."

We all must recognize and resolve these mountaintop-removal-caused health problems and end the onslaught of pollution on people. Ending mountaintop removal could be as simple as passing HR 526: the Appalachian Community Health Emergency Act, or possibly even an Executive Order. The ACHE Act will place a moratorium on all new mountaintop removal permits. This bill, when passed, will immediately improve the lives and health of the people who live with these impacts daily.

Two years ago, in fact, the USGS published preliminary findings on "unusually high" toxic compounds in the soil and water near strip mining operations. That USGS research team is no longer funded.

"Our state politicians display a willful ignorance of some 24 peer-reviewed scientific reports about mountaintop removal’s human health effects," Gunnoe wrote. "Studies show a correlation between living near a mountaintop removal site and significantly increased rates of cancer, birth defects and premature deaths. We believe they’d have a much harder time ignoring studies put out by the USGS."

Besieged residents in strip mining areas of Illinois, including Rocky Branch, and Kentucky, where a similar ruling over ignored human health risks, have long called for federal enforcement and action of flawed mining regulations.

Last night in Charleston, West Virginia, the premiere screening of a new feature film, Moving Mountains, based on the award-winning book by journalist Penny Loeb, was a reminder of the decades-long struggle by citizens for civil rights and health protection in coal mining communities in the courts and political corridors. Here's a trailer of the film, which stars actress Theresa Russell:

Moving Mountains, tragically enough, dates back to 1994. In fact, Aug. 3 marked the 37th anniversary of the flawed Surface Mining Control and Reclamation Act, which granted federal sanctioning for mountaintop removal, which President Jimmy Carter called a "disappointing effort" and a "watered down bill."

"Very little has changed," Gunnoe said, referring to the film's true life heroine, Patricia Bragg, a coal miner's wife who defends her community from water contamination. "There are only more Patricia Braggs now."

Even while central Appalachia's coal industry falters to exploding markets in the Illinois Basin and western coalfields, permits for new mountaintop removal operations continue to be filed.

"Judge Copenhaver confirmed what we already know: there is no law in the United States that says a permitting agency must consider Mountaintop Removal's toxic effects on people's health," said Bob Kincaid, with the Appalachian Community Health Emergency Act Movement. "At present, as a matter of law, people in Appalachia simply do not matter at all. If we had the A.C.H.E. Act, these ill-considered rulings wouldn't happen. They couldn't happen. The A.C.H.E. Act's moratorium on new permits would stop them."

Gunnoe's letter to President Obama is below:

My name is Maria Gunnoe. I live in Boone County, West Virginia, at the base of a mountaintop removal coal mining operation. My family has been here for generations, before the mine moved in above us.

Since the mine moved in, my family has experienced problems we trace directly back to that mine. (Details on some of that are below.) My outspokenness on what has happened to us, to my neighbors and to others living near these mines has led to my current employment as an organizer with the Huntington, W.Va.-based Ohio Valley Environmental Coalition (OVEC). It also led to my receiving the 2009 Goldman Prize for North America and the 2012 Wallenberg Medal. I am also an active member of the Appalachian Community Health Emergency campaign.

I write on behalf of OVEC, because something I read in the July 26 edition of the Charleston Gazette shocked me. An article titled, “USGS halts research on mountaintop removal’s public-health effects,” reports that, “Last year, the Obama administration quietly put the brakes on any new field work to gather data on the potential public-health threats posed by mountaintop removal.” (http://www.wvgazette.com/article/20140726/GZ01/140729409/1419)

I write to ask you restore the funding for Dr. Bill Orem’s team at USGS to gather data on the human health impacts of mountaintop removal coal mining. I believe any data gathered so far that is ready for publication should be released at once. In order to re-fund these studies, any USGS research on the health and environmental effects of unconventional oil and gas extraction should not be halted.

Our state politicians display a willful ignorance of some 24 peer-reviewed scientific reports (http://ohvec.org/issues/mountaintop_removal/articles/health/) about mountaintop removal’s human health effects. Studies show a correlation between living near a mountaintop removal site and significantly increased rates of cancer, birth defects and premature deaths. We believe they’d have a much harder time ignoring studies put out by the USGS.

Living with the impacts of mountaintop removal daily, while others get the pleasure of pretending it is not really happening, takes fortitude. When you see community members dying because of toxic air, it is truly devastating to take your next breath. We have watched so many people living near mountaintop removal sites become sick. I think the USGS studies will give scientific support to what we know, to what we live.

The toxic dust from mountaintop removal operations has invaded our homes and our bodies. It overcomes everything. Our state politicians ignore these facts, thus allowing people to become ill and even die prematurely!

In some cases, mountaintop removal is happening just hundreds of feet from occupied structures such as schools, churches and homes. It’s taking place directly above parks in communities such as Twilight, Madison, Artie, Peach Tree, Blair, Marsh Fork, Ashford, Williams Mountain, Prenter, Kayford, Whitesville, Mud, Sylvester and so many more. Even historic family cemeteries are surrounded by exploding mountains.

OVEC has witnessed an overall demise in the mental and physical well-being of people living in these communities. We worry that this is the worst of the effects of mountaintop removal. What this practice is doing to people is inhumane and cruel; they are living in hell on earth in the communities where mountaintop removal is happening, and they are not being heard by the politicians and regulators who should be listening.

Again, we believe they’d have a much harder time not listening when it is the USGS telling us about the human health impacts of mountaintop removal coal mining.

We hope that our politicians see what a massive mistake they have made in fighting hard for more mountaintop removal coal mining. We all should recognize the risk to human lives and immediately end all mountaintop removal operations in order to protect human lives. This is the coal industry’s and the politicians’ chance to show that they truly do care about the people of Appalachia and not only the production of Appalachian coal.

Coal miners and their families deserve better living conditions in their homes and communities than they have on their job sites, but not even their children have safe air to breathe. It must be terrible to have to pollute your children’s air for a paycheck. The enforcement of regulations protects lives on the job and the lives of people in our communities. The companies’ rights to mine coal ends when it infringes on citizens’ rights to live healthy lives in our homes.

There should never be another mention of the “war on coal” by our state leaders. The truth is that Appalachian citizens are the casualties of a silent “war on people” who live where coal is extracted. Citizens of all ages are dying for the coal industry’s bottom line.

We all must recognize and resolve these mountaintop-removal-caused health problems and end the onslaught of pollution on people.

Ending mountaintop removal could be as simple as passing HR 526: the Appalachian Community Health Emergency ACT (http://acheact.org/the-legislation/), or possibly even an Executive Order. The ACHE Act will place a moratorium on all new mountaintop removal permits. This bill, when passed, will immediately improve the lives and health of the people who live with these impacts daily.

As you can tell, I want an end to mountaintop removal today. I’m tired of watching the people in our community get sick and die too early. I believe the science is already in showing this type of coal mining is dangerous and deadly. I believe that the passage of the ACHE Act would end mountaintop removal. But, still I ask that you restore the funding for Dr. Orem’s team, because their findings would arm us with the scientific evidence we need to finally convince Congress and you that we are saying is indeed true.

The health of those of us here in central Appalachia does matter. Please restore the funding and help us end mountaintop removal!

With deepest respect and sincerity,