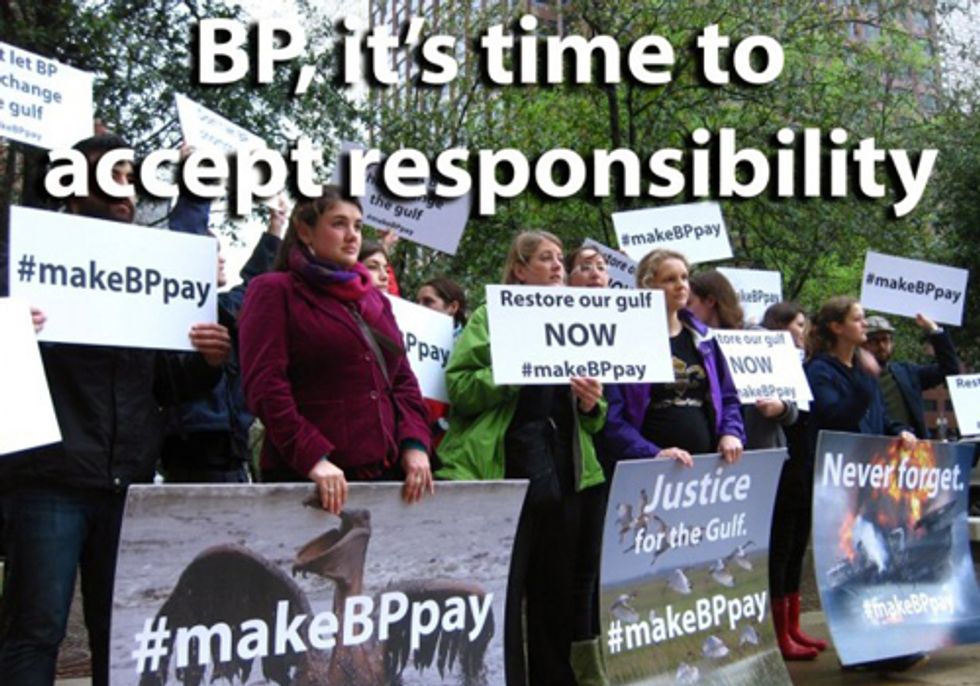 Yesterday marked the start of the civil trial to hold BP accountable for the 2010 oil disaster in the Gulf of Mexico. As dawn broke in New Orleans, 50 Gulf coast residents and representatives from National Wildlife Federation, Environmental Defense Fund, National Audubon Society, Levees.org, Gulf Restoration Network, Sierra Club and university students came to the Hale Boggs Federal Courthouse to demonstrate that they, like rest of the nation, expect BP to pay for the destruction in the Gulf of Mexico.

Yesterday, as the doors to the courtroom opened for the first day of the BP trial, more than 50 people gathered to send a clear message to the world: It's time to make BP pay!

Three years after the devastating Deepwater Horizon explosion, the gulf is still suffering. Dolphins are still dying in high numbers of as-yet unexplained causes and additional oil washes ashore after each big storm. In his opening statements today, Louisiana Attorney General Buddy Caldwell stated that one million barrels of oil remains unaccounted for.

Some people may be asking, “Hasn’t BP paid for the damage?” and the simple answer is no. BP did pay a record-breaking $4 billion penalty in the criminal portion of the case, but BP still faces tens of billions in civil penalties for reckless violations of the Clean Water Act and the Oil Pollution Act.

One of the main issues at hand is whether or not BP is guilty of “gross negligence.” With everything the public knows about the failed tests, the intentional misrepresentations about the size of the spill, and BP’s abysmal safety record, NWF’s legal experts believe the case should be a clear-cut case of gross negligence.

However, media reports indicate that the Department of Justice may have offered BP a lower-than-expected settlement. Larry Schweiger, president and CEO of the National Wildlife Federation said, “A potential settlement as low as the reported $16 billion would not be much of a deterrent for an oil giant like BP—and it is unlikely to be enough to fully restore the Gulf of Mexico as the law requires. The Obama Administration can and must do more to hold BP accountable.”

Here's a recap of day one of the BP oil spill trial from Whit Remer, policy analyst for the Environmental Defense Fund:

Yesterday, I watched opening statements from inside the courtroom of one of the most complex and high stakes trials in this nation’s history. The first day of the BP trial consisted of nearly six and a half hours of opening statements by both sides of the litigation. Opening statements allow each party the opportunity to present on overview of their case. On the plaintiffs’ side, attorneys represented citizens who lost income as a result of the oil spill as well as the federal and state governments pursuing claims for economic and environmental damages. On the defense side, BP and other companies involved in the spill spent the majority of the time pointing fingers at each other over who was at fault for the events leading up to one of the nation’s largest environmental disasters.

The first phase of the trial is scheduled to last three months and will focus on the events that caused the explosion aboard the troubled rig. On the plaintiffs’ side, attorneys focused on a series of missteps, mainly taken by BP, that that took the lives of 11 men and spilled millions of gallons of oil in the Gulf of Mexico. A lot of attention was focused on BP putting profit over protection. Plaintiffs painted BP as a company more worried about making money than the safety of its workers or practicing responsible drilling in the gulf. BP defended itself by saying that while they did make some mistakes, their actions didn’t amount to gross negligence.

BP’s irresponsibility will be an overarching theme of the trial. Should the judge determine that the company acted grossly negligent or with willful disregard, then BP faces civil Clean Water Act fines of $17.6 billion. Later phases in the trial will also determine the extent of damages to the gulf ecosystem, which could also reach the tens of billions of dollars.

All parties to the litigation have incentive to settle. The government would like to resolve Clean Water Act fines and natural resources damages so that money can be used to begin important ecosystem restoration. For BP, trial has brought bad PR and uncertainty for investors that will keep them at the bargaining table. In such a high stakes legal dance, both parties need to remember that the gulf is still reeling from damage caused by the oil spill. As Buddy Caldwell, Attorney General for the state of Louisiana, noted this morning, officials continue to find oil just 30 miles from the court steps in Barataria Bay, La. It’s time for BP to stop stalling and pay up for the damage they caused in the gulf.