Gulf of Mexico’s Dead Zone Could be Largest Ever, Thanks to the Meat Industry 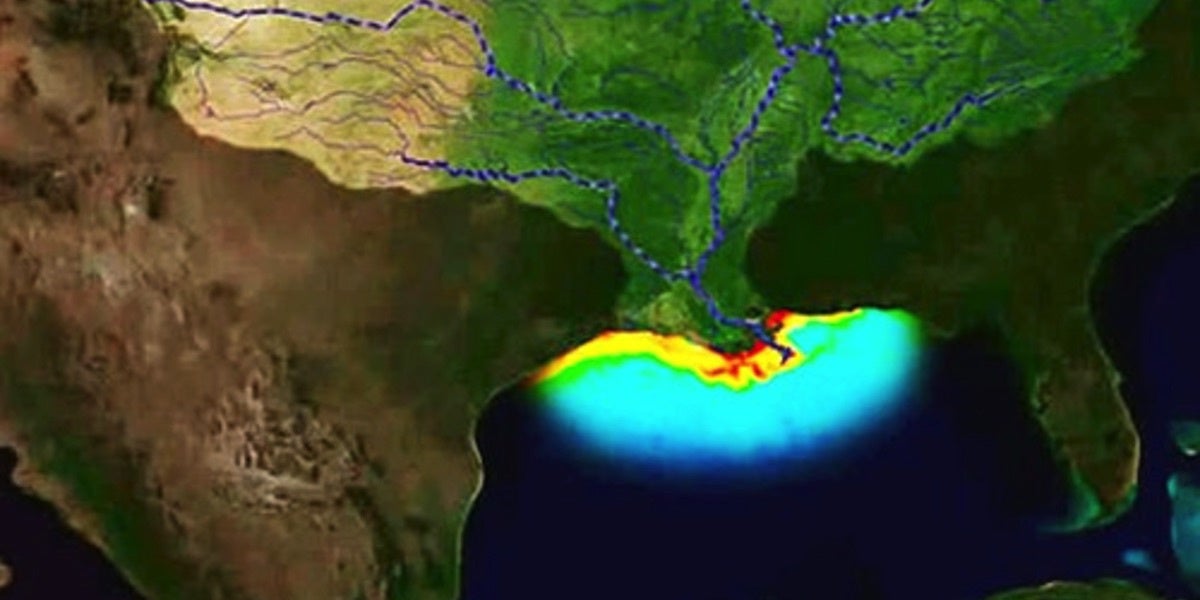 Scientists predict that so much pollution is pouring into the Gulf of Mexico this year that it is creating a larger-than-ever “dead zone” in which low to no oxygen can suffocate or kill fish and other marine life.

The Guardian reported that the National Oceanic and Atmospheric Administration (NOAA) is expected to announce this week the largest recorded hypoxic zone in the gulf, an oxygen-depleted swath that’s even larger than the New Jersey-sized, 8,185 square-mile dead zone originally predicted for July.

And in a new analysis from environmental group Mighty, the meat industry as well as the country’s appetite for meat is much to blame.

When fertilizer and manure washes off soy and corn fields used to grow feed for livestock, it not only contaminates local drinking water supplies, it flows into larger water bodies and creates toxic algal blooms from the excessive nutrients, particularly phosphorus and nitrogen. When the algae dies and decomposes, it depletes the waters of oxygen and eventually leads to vast dead zones that is toxic to aquatic life.

“While fertilizer pollution starts in the Midwest, it flows down the Mississippi River until it finally dumps out into the Gulf of Mexico, which collapses into one of the world’s largest Dead Zones each year as a direct result,” the report states.

Mighty is calling on Big Meat—particularly Tyson Foods, the largest meat company in the U.S.—to urge their grain producers such as Cargill and Archer Daniels Midland to take steps to reduce and prevent runoff pollution.

“This problem is worsening and worsening and regulation isn’t reducing the scope of this pollution,” Lucia von Reusner, campaign director at Mighty, told the Guardian. “These companies’ practices need to be far more sustainable. And a reduction in meat consumption is absolutely necessary to reduce the environmental burden.”