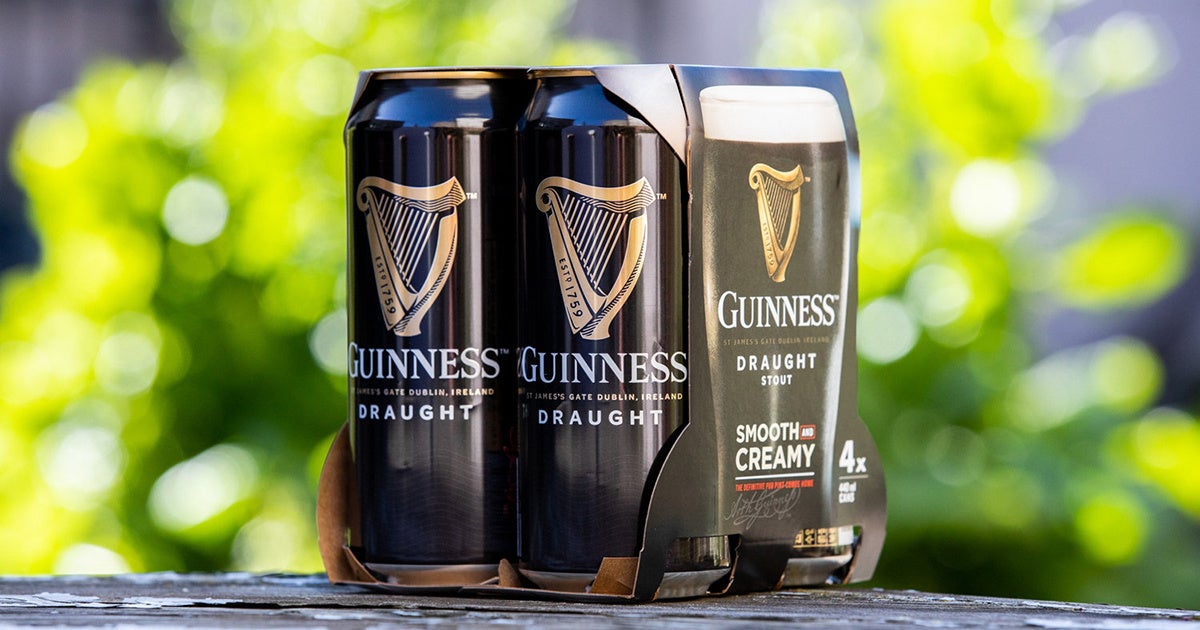 Beer packs of Guinness will now come in a cardboard box. Diageo

Guinness is joining the fight against single use plastic. The brewer has seen enough hapless turtles and marine life suffering from the scourge of plastic.

Guinness’s parent company, Diageo, announced that the iconic Irish stout will no longer use plastic rings or shrink wrap. Instead, the company will invest $21 million to replace plastic with 100 percent recyclable and biodegradable cardboard, according to CNN Business. The change, which will be introduced in Ireland in August and the rest of the world by August 2020, also applies to Guinness’s other products, Harp and Smithwick’s.

“Great packaging is essential for our products,” said David Cutter, Diageo’s chief sustainability officer added, reported the The Telegraph. “Consumers expect our packs to look beautiful, be functional, and sustainable. I am proud to announce this investment, through which we have been able to combine all three. We have been working tirelessly to make our packaging more environmentally friendly.”

Diageo estimates that its new initiative will be equivalent to removing 40 million 500 ml plastic bottles, which if laid out end-to-end, would reach from London to Beijing, or New York City to Honolulu, according to The Telegraph.

“We’re continuously looking for ways to work with our suppliers, customers and consumers to make our packaging more sustainable and our targets ensure that 100% of plastics used are designed to be widely recyclable, or reusable/compostable,” the company said in a statement, The Hill reported.

This piggybacks on Diageo’s statement last year when it announced its intention to to ensure all plastics are widely recyclable or reusable by 2025.

“For 260 years Guinness has played a vital role in the communities around us. We already have one of the most sustainable breweries in the world at St. James’s Gate and we are now leading the way in sustainable packaging,” said Mark Sandys, global head of beer, Baileys and Smirnoff for Diageo, as reported by The Telegraph.

Guinness follows the footsteps of other brewers who have taken steps to reduce ocean plastic. In 2016, Salt Water Brewery announced all their six-packs of Screamin’ Reels IPA would be packaged with E6PR (Eco Six Pack Ring), a compostable holder made with some brewing byproducts like spent wheat and barley, according to National Geographic.

“I can’t speak to the nutrition of barley to sea turtles, but it does seem a lot more benign if ingested than traditional six-pack plastics,” Nick Mallos, director of the Ocean Conservancy’s Trash Free Seas program, told National Geographic in 2016

The Danish beer company, Carlsberg, announced last September that it would ditch plastic rings, according to CNN Business. Instead, Carlsberg will be packaged in a special glue that holds the cans together. The Danish brewer estimates that shifting to glue will reduce global waste by the equivalent of 60 million plastic bags.

Guinness and Carlsberg are the latest beverage companies to respond to the backlash against plastic around the world. Starbucks and Alaska Airlines will phase out plastic straws and stirrers. McDonalds will stop using plastic straws in the UK and Ireland. The Chicago White Sox became the first MLB team to ban plastic straws.