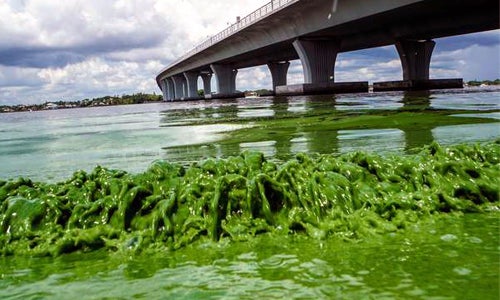 Residents have described the foul-smelling algae as “guacamole-thick,” “god-awful” and “a festering infected creepy mess.” One resident has complained of health problems, telling Reuters, “It is affecting all of us as far as red eyes, runny nose and the ‘in the throat’ feeling.”

“It’s heartbreaking for all of us who live, work and play along the lagoon to see how the quality of the water has declined,” environmental non-profit Balance For Earth wrote on Facebook.

The source of the severe bloom is believed to stem from the polluted Lake Okeechobee, which has become a hotbed of finger-pointing.

ThinkProgress reported in February that local industries have long dumped an assortment of chemicals, fertilizers and cattle manure into the lake. David Guest, managing attorney of the Florida branch of the environmental law group Earthjustice, described the lake as a “toilet.”

The Guardian reported that algae samples from the lake taken earlier this month found levels of toxins 20 times higher than a safety threshold set by the World Health Organization.

The officials who regulate the toxic, overflowing lake are in an unenviable position. To prevent flooding, water gets flushed from the lake into the St. Lucie River that flows to the ocean via Martin County. They can’t just leave the water there either; high water levels have added stress to the aging Herbert Hoover Dike, a 143-mile levee that surrounds the lake. Florida’s high rainfall only makes matters worse.

However, according to UPI, Scott said the Obama administration is at fault for failing to repair the dike.

“Because the Obama Administration has failed to act on this issue, the U.S. Army Corps of Engineers [which regulates lake levels], continues to discharge millions of gallons of water into the St. Lucie and Caloosahatchee estuaries resulting in the growth of blue-green algae which is now entering residential waterways in South Florida,” he said. “Although the president has failed to do what is needed to address this growing issue, the state of Florida will devote every available resource to find solutions for the families and businesses in this area.”

However, Irene Gomes, local resident and owner of the Driftwood Motel in Jensen Beach, has blamed Scott. Gomes told the Associated Press that the governor has not done enough to curb pollution from farms north of the lake or purchase land farther south where lake waters could be stored and cleaned.

Local environmental agencies, including the Florida Department of Environmental Protection and the Florida Fish and Wildlife Conservation Commission, have now been tasked with addressing the blooms, including reducing the flow of water into Lake Okeechobee and creating a hotline for residents to report algae blooms.

Deborah Drum, manager of ecosystem restoration at Martin county, told the Guardian that there is no known way to effectively clean up an algal bloom.

“We have to wait for it to disperse,” she said. “We anticipate that it will go away but we are not sure about that now. We didn’t expect this to happen so we are kind of at a new frontier.”

Algae blooms have become a worsening problem in many parts of the U.S. In Toledo, Ohio a toxic algae blooms erupt across Lake Erie every year.

The Environmental Working Group wrote that for algal blooms in Martin County, Lake Erie and other parts of the country, the primary source of pollution is conventional agriculture.

The Dead Sea is Shrinking at Alarming Rate, a Record Low-Point for Earth