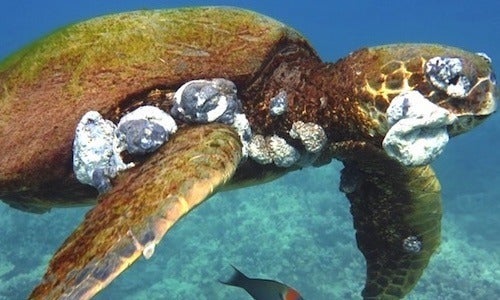 A turtle hospital in Marathon, Florida is treating an increasing number of green sea turtles affected by fibropapillomatosis (FP), a global sea turtle disease caused by a herpes virus. The disease leads to the formation of tumors on the turtles’ eyes, flippers and internal organs. The possible culprits? Pollution and warming waters.

“Marine turtles with FP have external tumors that may grow so large and hanging as to hamper swimming, vision, feeding and potential escape from predators,” hospital manager Bette Zirkelbach told the publication. “Over 50 percent of the green sea turtle population in and around the Florida Keys is infected with FP.”

The hospital cuts off these growths with a carbon dioxide laser. “When I first started here 20 years ago, I would do six to eight of these [surgeries] a month,” veterinarian Doug Mader told the international news agency Agence France-Presse. “Now we are doing six to eight a week.”

“In 2012 it was rare to have a turtle coming in with tumors on both eyes. By fall of 2013 almost every turtle that came in with this virus had both eyes covered with tumors,” Zirkelbach told the AFP.

According to the Florida Fish and Wildlife Conservation Commission, the survival rate of green turtles after surgery is more than 90 percent. However, it’s not exactly a simple slice and dice job. For instance, according to a Turtle Hospital newsletter, it took half a year and eight surgeries to remove every tumor from a female sub-adult green sea turtle named Squirt, who was found severely sick and injured in a marina in Islamorada last July. The tumors were all over her eyes and body. Fortunately, Squirt’s surgeries were a success and she is currently recovering.

Squirt, however, is one of the lucky ones. Because the turtles are already so sick, only one in five green sea turtles staying at the hospital with fibropapillomatosis get released back to the wild, Zirkelbach said.

“The biggest challenge for us is it never ends,” Mader says in the video below about the revolving door of FB-infected turtles. “Every week, it’s the same thing over and over again.”

Although the increased number of FB-affected turtles the hospital is seeing could be due to the area’s rebounding green sea turtle populations or increased local rescue and awareness efforts, increased pollution in urban areas and farm water runoff could also be the causes.

A 2014 study from Duke University, the University of Hawaii and the National Oceanic and Atmospheric Administration (NOAA) found a link between polluted urban and farm runoff in Hawaii to FB in endangered sea turtles, Science Daily reported. The researchers said that excess nitrogen in the runoff accumulates in algae that the turtles eat and can cause the disease.

The increases in sea surface temperatures as a result of climate change is also suspected.

“I have this horrible feeling that as the oceans warm we are going to see more and more disease,” Mader told AFP.

Billy Causey, who has studied sea turtles since the 1960s and managed NOAA’s marine sanctuaries in the Keys since 1983, also believes warmer waters could be a cause.

“It’s basic chemistry,” Causey told The Miami Herald in 2014. “You heat water a little bit and nothing happens. But then you add chemicals to the water, certainly things accelerate.”

According to the Florida Fish and Wildlife Conservation Commission, the first case of FB was reported in 1938 when the disease was detected in green turtles in the Florida Keys. The disease has now been observed in all major oceans.

Watch This Zebra Escape From a Tokyo Zoo