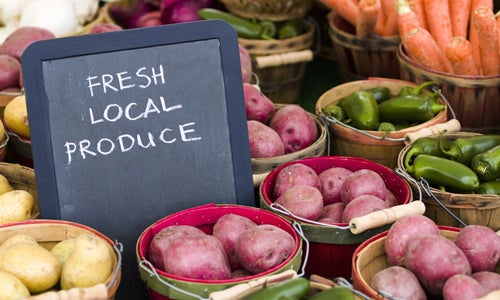 A recent U.S. Department of Agriculture (USDA) report to Congress reports that local and regional food sales in the U.S. totaled US$6.1 billion in 2012—an increase from the reported US$4.8 billion in 2008. This amount accounts for the selling of food from local farms, “for human consumption through both direct-to-consumer (e.g., farmers’ markets) and intermediated marketing channels (e.g., sales to institutions or regional distributors).” The report findings provide an updated assessment of the growing trend in both the production and consumption of local food in the U.S.

Local food sales are accounted from the 7.8 percent of U.S. farms that identify as “marketing food locally.” Of those farms, 70 percent facilitated sales solely through direct-to-consumer (DTC) marketing channels, while the remaining 30 percent operated entirely through intermediated marketing channels, or a combination of both. Between 2002 and 2007, the number of DTC farms and number of DTC sales demonstrated a correlating increase of 17 percent and 32 percent. However, from 2007- 2012, data exhibited only a slight increase of 5.5 percent in the number of DTC farms in the U.S., “with no change in DTC sales.” Dr. Sara A. Low of the Economic Research Service (ERS) suggests that the plateau in DTC sales could have resulted from a lull in consumer interests, an increase in sales transactions through intermediated marketing channels or a byproduct of the recession.

The USDA report also indicates that between 2007 and 2012, there was a decrease in the value of DTC sales, while sales through intermediated marketing channels exhibited great returns. In fact, 80 percent of the US$6.1 billion in total local food sales were through intermediated marketing channels from larger local food farms, many situated near urban centers.

The report did not provide specifics regarding consumer demographics for DTC marketing outlets. More often than not, DTC marketing outlets, like farmers’ markets, offer lower prices than grocery stores. But the data reveals that consumers are willing to pay a premium for local foods.

Over the last several years, more than 30 state laws have passed in an effort to expand the presence of farmers’ markets nationwide. Many of these laws seek to not only support and grow local food systems, but they also work towards increasing access to healthy foods. Furthermore, the 2014 Farm Bill highlights “increased” funding for the development of intermediated marketing channels, and the “reauthorization” of “food access programs” targeting both senior citizens and school children. In addition, the current Farm Bill also establishes increased access to “locally and regionally marked food” for SNAP participants by allocating funds to make purchasing from farmers’ markets an easier and less costly process.

Jessica Wright graduated from Harvard College with an A.B. in Government, and is currently a graduate student at NYU pursuing a Master’s in Food Studies.