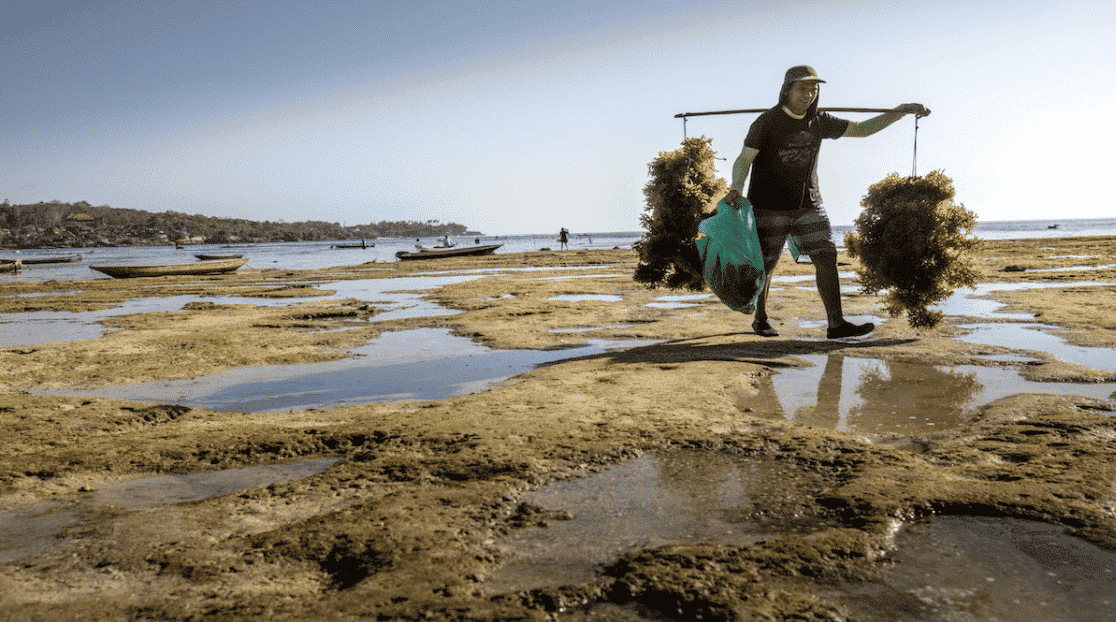 Seaweed, a term for the diverse group of large, nonflowering marine organisms known as algae, has a wide range of uses, from food and fertilizer to fuel. It also absorbs carbon and is a potentially potent tool in fighting climate change. Seaweed is simple to grow, requiring only seawater and sunlight, and is beginning to be farmed more extensively all over the world.

In California, scientists at UCSD’s Scripps Institution of Oceanography have been developing seaweed that helps reduce the methane produced by cows. “You essentially just pump seawater from offshore through some filters. You have your system of tanks and you basically just need sunlight and seawater to cultivate the seaweed,” said project leader Dr. Jennifer Smith, as ABC 10News San Diego reported.

According to Smith, methane is a 30-times more potent greenhouse gas than CO2. When the cows eat the red seaweed developed by Smith and the other scientists on the team, studies have shown a reduction in the amount of methane emitted from the cows’ belches. Their digestive process is made more efficient by the seaweed and thus less of what they eat is converted into waste and its byproduct, methane. Following three years of research, Smith and the other scientists hope to have their seaweed supplement available for use at California farms early this year. The team expects the emissions from the cows to be reduced by over 50 percent.

“If you could get it out of the mix, you’d have an immediate effect on the rate of climate change. Today about 25% of warming is a result of methane,” said Scott Peters, a San Diego Congressmember who was co-author of a bill to help tackle methane emissions, ABC 10News San Diego reported.

But for some California companies trying to farm seaweed in the state, the permitting process is so lengthy and costly, it’s proving to be a roadblock for those that want to join the blue economy. It can take years and cost thousands of dollars to set up a seaweed farm in California.

“I just don’t understand why this is so difficult when it’s something that is so important and could be so good for the environment,” said Daniel Marquez of seaweed farm PharmerSea, reported the San Francisco Chronicle. Marquez has waited six years to get permission from the State of California for his underwater kelp farm near Santa Barbara. He and his wife use the kelp in research and in their cosmetics company.

Seaweed farmers in California are frustrated by the permitting process, as seaweed farms in other states like Alaska, Maine and Hawaii flourish. Other than in a few local harbor or port areas, a new commercial aquaculture lease hasn’t been issued in California for more than 25 years. Just last year, California’s first commercial open-water seaweed farm opened in Humboldt Bay, where the local harbor district has the authority to grant its own permits.

According to the U.N. Food and Agriculture Organization, from 2006 to 2015 farmed seaweed doubled worldwide. Recently, the U.S. Department of Energy invested $55 million for research into farming seaweed for use in the making of bioplastics and biofuel.

“Still, the most effective way to sequester carbon is to not release it in the first place,” wrote Heather Smith of Sierra, the magazine of the Sierra Club. “For example, scientists recently calculated that bottom trawling… releases as much carbon into the atmosphere as the entire aviation industry does — about a billion metric tons a year.”