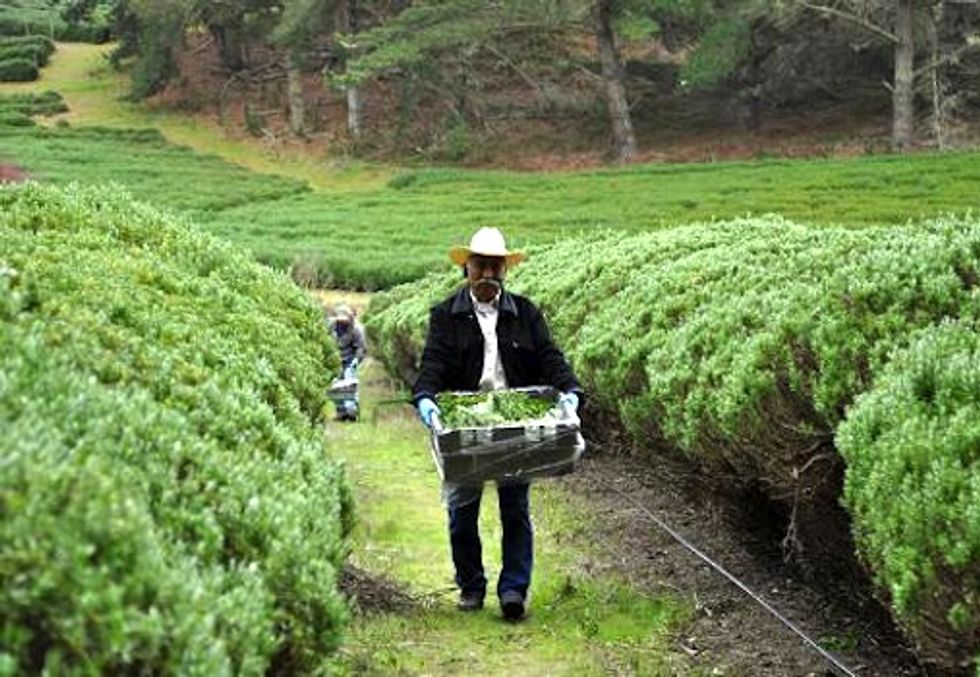 "The only good aphid is a dead aphid" used to be my mantra. I would walk up and down rows of plotted trees, spraying the plants with Metasystox, oblivious to the risks to my own health. I didn’t bother with rubber gloves, a mask, or even rubber boots, leaving my skin exposed to this toxic pesticide. With the lid to the pesticide sprayer not properly sealed, Metasystox leaked down my back. Dizzy with nausea, I passed out. This was my harsh introduction to pesticides. It was also the last time I ever used anything toxic on my crops.

The reality of our dependence on toxic pesticides in the U.S. and around the world can be hard to stomach. The toxic chemicals we spray on our crops aren’t just killing pests—they’ve been linked to cancers, learning disabilities, birth defects and other health risks for humans. In recent years, we’ve made some progress: our organophosphate use is down 85 percent from 228 million pounds in 1980 to 33 million pounds in 2007. The holy grail of soil fumigants, Methyl Bromide, declined 10 million pounds between 2001 and 2007.

Still, we remain addicted to toxic pesticides to the tune of one billion pounds applied to U.S. farms, forests, lawns and golf courses each year, unnecessarily putting our health on the line every day.

I first started working with pesticides in my early twenties, when I grew pine trees in southern California. On a routine inspection, the county agricultural inspector discovered tiny green aphids in my nursery. They had to go, he said. So the inspector recommended a solution: a brown jug labeled with a skull and cross bones: Metasystox.

You’ll remember that this story doesn’t end well for me. Metasystox is extremely toxic, gets absorbed into plant tissue, and doesn’t wash off. Fortunately, the pesticide was banned by the Environmental Protection Agency in 1988. But that was too late for me. I found myself on the ground, dizzy and sick, and vowed never to use pesticides again.

I knew there had to be a better way. I got my first peek into the wonders of the insect world from a good friend, Everet (Deke) Dietrich, who was raising beneficial insects in Ventura, California. After all, as Deke pointed out, forests, meadows, and hillsides aren’t ravaged by chewing and sucking insects—other bugs naturally eat them, allowing plants to thrive. So I introduced green lacewing larvae into my nursery. Lacewing larvae have a voracious appetite for aphids. It worked.

It’s this same toxic-free principle of healthy and natural pest management that serves the foundation of everything we do at Jacobs Farm. Tucked away in a coastal valley near Pescadero (a hamlet on the California coast between San Francisco and Santa Cruz), by the mid-1980s Jacobs Farm had become a successful organic venture. While others were skeptical about organic growing, my wife Sandra and I were committed to growing food that was healthy and fresh. We started with elephant garlic, peas, broccoli, squash and berries, gradually moving on to fresh culinary herbs. Today, we’re proud to be the nation’s largest producer of fresh cut organic herbs.

But growing without pesticides wasn’t the only thing on our minds. On a visit to Mexico in 1985, Sandra and I were lucky enough to meet farmers who were struggling to make it in their small town of 10,000 people. We knew the difficulties of growing, and wanted to help link these growers to larger markets, so they could feed their families well into the future. With this goal in mind, we started the Del Cabo cooperative that same year, with the explicit goal of creating economic opportunities for small-scale farmers at the tip of the Baja California peninsula. Our plan was simple: teach organic farming practices, create an organization that aggregates supplies and production, and connect them to winter markets in the United States. We began with eight families.

Getting started was anything but easy. The Baja was isolated from mainland Mexico by the Sea of Cortez, connected to California only through a windy, narrow two-lane road to the north of the peninsula. Supplies were scarce. For clothes or kitchen ware we'd drive three hours to La Paz. PVC fittings we'd bring down from San Diego, more than 800 miles away. At times, we feared the farms would disappear, as the region was branded “Los Cabos” and targeted to become a mega tourist destination. Would these farmers be forced to become dish washers and waiters?

What began in 1985 with eight skeptical families now includes more than a thousand families, encompassing the entire length of the Baja peninsula and mainland Mexico. With new access to U.S. markets, family incomes have increased ten-fold from an average $3,000 USD per year to $28,000 by 1990. Del Cabo replaced pressure to leave home, farm, and family for a better life in “el norte.” While many of the founding farmers have passed, their children and grandchildren continue making a decent living growing organic food. Del Cabo continues to expand, forming an alliance with Fairtrasa, a like-minded Swiss company working in Peru, Chile and Argentina, and is today planting the Del Cabo model in Guatemala and Tanzania.

Del Cabo's impact is perhaps best told by the families involved. One single mother, who grew basil and cherry tomatoes while raising two children, proudly told me that her basil harvest paid for her daughter's medical school and her son’s law education. For another family, organic farming helped encourage “reverse migration,” where the Espinoza brothers returned to their family farm from Los Angeles, where they were previously working illegally as welders.

We know that growing food is not trivial. Insects ravage crops. And when your livelihood depends on a successful harvest, it is easy to understand why farmers resort to pesticides that offer immediate, but often short-term and short-sighted solutions to complex problems. We know old and new innovative pesticide-free solutions to feed soil and plant health exist. And with our company Farm Fuel, Inc., we’re working with some of the nation’s best scientists and researchers to identify and scale up these ideas in the laboratories to bring productive solutions to our farmers’ fields.

We started working with Robert Van Buskirk, a scientist at Lawrence Berkeley Labs now with the Department of Energy, to grow Salicornia, a saltwater marsh plant, as an oil seed for biodiesel. This evolved to mustard because it grows with California's winter rains on open fields and hillsides.

Speaking of mustard, Dr. Matt Mora at University of Idaho is an expert in mustard plant chemistry. We're interested in their glucosinolates, the hot stuff you taste when you put mustard on your hot dog. With Matt's help, Farm Fuel developed a soil amendment that appears to create soils suppressive to fungal diseases and nematodes. Farmers who couldn't grow a straight carrot without fumigating with a nematicide now have a soil amendment that does a better job.

Dr. Jeff Aldrich, an entomologist and specialist in how plants and insects communicate, is helping us develop pesticide-free tools for farmers to increase populations of beneficial insects used to decrease populations of plant feeding insects. Lacewings have a voracious appetite for aphids, insects that feed on plant sap. Jeff discovered a chemical that attracts Chrysopa, a genus of lacewing that we hope to use to increase productive populations of in farms when needed.

With this NRDC Growing Green Award, we hope to encourage other businesses, farmers and innovators to join us in growing healthy food in a healthier way. Despite the skills required to manage soils, water systems, plants, people, and the vagaries of weather, insects, diseases, and markets, farming may never provide the financial rewards of other higher profile jobs. Farmers may never be household names like great athletes or movie stars. But we can’t think of anything more important and fulfilling than finding ways to grow healthy food without poisoning the planet. Like so many other good food stewards, we’re working to support healthy families, communities and economies, and are very thankful to NRDC for this award.