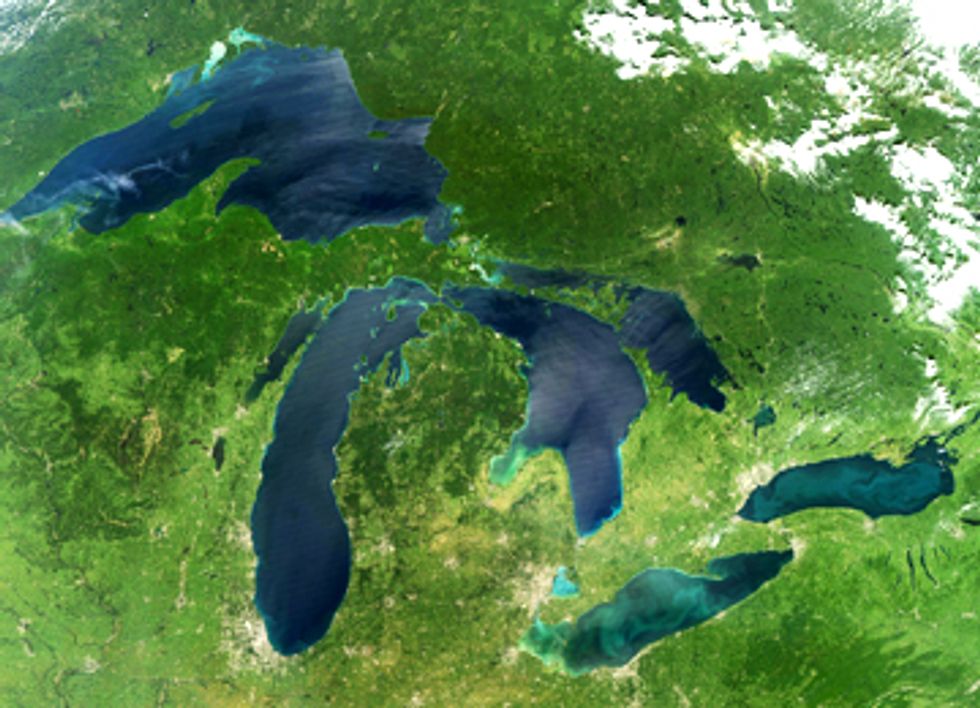 A coalition of Great Lakes states, municipalities, tribes, businesses, industries and conservation groups is urging Congress to restore funding to programs to heal the Great Lakes. In a letter released on Thursday, the groups are asking lawmakers to reject massive cuts proposed in a U.S. House budget and to maintain the nation’s commitment to the Lakes, the source of drinking water for more than 30 million people.

The groups are pushing to reinstate funding for the Great Lakes Restoration Initiative, which supports efforts to clean up toxic contamination, reduce runoff from cities and farms, confront invasive species like Asian carp, and restore fish and wildlife habitat; and for the Clean Water State Revolving Fund, which provides low-interest loans to communities to fix sewers to prevent water pollution and keep beaches open.

Both programs were cut roughly 80 percent in a House budget released in July. The restoration initiative was cut from $285 million to $60 million, while the clean water fund was slashed from $1.37 billion to $250 million. An amendment would boost Great Lakes restoration funding to $210 million.

“The Great Lakes Restoration Initiative helps to achieve priorities established by nearly 1,500 stakeholders who participated in the Great Lakes Regional Collaboration," said Kathryn Buckner, president of the Council of Great Lakes Industries. "The region’s industries were part of that process and are strong supporters of programs that help to manage our economic, social and natural resources sustainably.”

“The federal government has recognized the importance of the priorities established during the Collaboration and needs to continue supporting the Great Lakes Restoration Initiative and Clean Water State Revolving Fund to fulfill that vision,” Buckner continued.

Signatories to the letter helped craft, and later supported the enactment of, the Great Lakes Regional Collaboration Strategy to Restore and Protect the Great Lakes, a 2005 plan initiated by President George W. Bush calling for a $20 billion investment to restore the Lakes.

Over the last four years, President Obama and the U.S. Congress have invested more than $1.37 billion through the Great Lakes Restoration Initiative to implement that plan. More than 1,500 projects have been funded. Those projects are producing results in communities across the region.

The Great Lakes Commission has created an interactive map and searchable database of projects funded in the initiative’s first three years.

“The Great Lakes Restoration Initiative and the Clean Water State Revolving Fund program have been tremendously beneficial in helping states throughout the region clean up and restore our waters,” said Kenneth G. Johnson, chair, Great Lakes Commission. “These programs, coupled with states’ efforts, are helping us maximize the value of the Great Lakes as both a natural treasure and vital economic asset.”

Much work remains, however. The letter warns: “cutting funding now will only slow restoration efforts, allowing problems to get worse and more expensive to solve.”

The Great Lakes are an economic driver for the eight-state region of Michigan, Ohio, Wisconsin, Illinois, New York, Pennsylvania, Indiana and Minnesota. More than 1.5 million U.S. jobs are directly connected to the Great Lakes, generating $62 billion in wages annually, according to an analysis by Michigan Sea Grant at the University of Michigan. The Lakes are the foundation for a $30 billion regional tourism industry.

Restoration efforts create jobs while providing long-term economic benefits. According to the Brookings Institution, every $1 invested in Great Lakes restoration produces at least $2 in economic benefits. Some studies suggest the return on investment is closer to six to one.

“As our defining natural asset, the quality of the Great Lakes is pivotal to the future of our region's economy,” said Ed Wolking, Jr., executive vice president for the Detroit Regional Chamber. “While we recognize that the federal budget must be reined in, and that there must be a greater balance between spending and revenues, we also urge Congress to consider continuing and completing the vital projects that make up the Great Lakes Restoration Initiative.”

“All of our communities benefit from the actions made possible by the Great Lakes Restoration Initiative,” said Jane A. TenEyck, executive director, Chippewa Ottawa Resource Authority. “We want to ensure that future generations are able to fish, hunt and enjoy the Great Lakes without worrying about pollution or invasive species.”