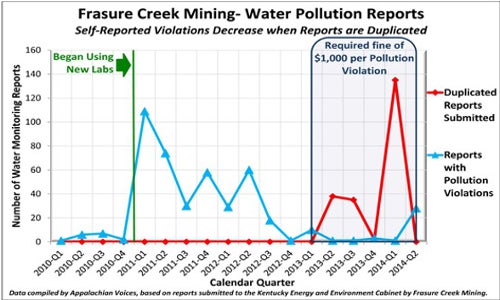 Just last month, a technician at a West Virginia lab which performed water pollution tests for coal companies required under the Clean Water Act pleaded guilty to charges of falsifying those reports. Now four citizen and environmental groups in Kentucky are charging that a major coal company is falsifying its Clean Water Act reports and state regulators responsible for reviewing the reports systematically ignored them. 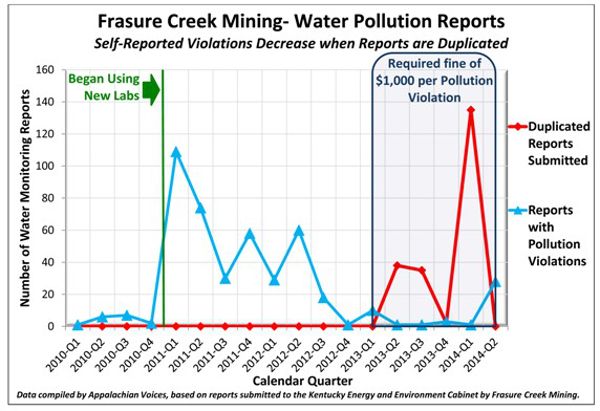 The groups charge that the false pollution reports sent to the state by Frasure Creek comprised nearly 28,000 violations of federal law. Each charge carries a potential fine of $37,500, so a maximum penalty could theoretically be more than $1 billion. They also say that Kentucky Energy and the Environment Cabinet failed to detect such falsifications as duplicating results from one report to another, changing only the dates, as well as changing values that would have exceeded pollution limits.

“The Clean Water Act absolutely depends on accurate reporting of pollution discharges,” said Waterkeeper Alliance attorney Pete Harrison. “False reporting like this undermines the entire regulatory framework that safeguards the people and waters of Kentucky from dangerous pollution. By all indications, this case looks like the biggest criminal conspiracy to violate the federal Clean Water Act in the history of that law. The refusal of the U.S. attorney in Lexington and the Environmental Protection Agency to bring criminal cases against Frasure Creek is just as inexcusable as the state’s failure to bring this company into compliance.”

It’s not the first time the groups have had Frasure Creek in their sights.

As the notice states, “Three years ago the citizen groups discovered that Frasure Creek had repeatedly copied the exact same pollution data from one report to the next and submitted the falsified reports to the Kentucky Energy and Environment Cabinet. Now, after an apparent pause in its false reporting, Frasure Creek has resumed this illegal practice. As before, the Cabinet has utterly failed to even notice these flagrant violations of the laws that it is bound to uphold. Frasure Creek’s actions—and the cabinet’s failures to act—undermine the regulatory framework that safeguards the people and the waters of Kentucky from dangerous pollution. Because the Cabinet seems incapable of meaningful oversight, the Citizen Groups must once again step in, both to expose rampant violations of the Clean Water Act and to enforce the law.”

At that time of the prior violations coming to light, the company attributed them to “transcription errors” and the cabinet levied a token fine, saying that the agency would do a better job of identifying misreporting in the future. As a result of the 2010 investigation, Frasure Creek hired new, more reliable labs for a short period of time and the pollution levels it reported spiked. The groups tried to sue for these violations, but the state reached a slap-on-the-wrist agreement with the company, precluding such action. 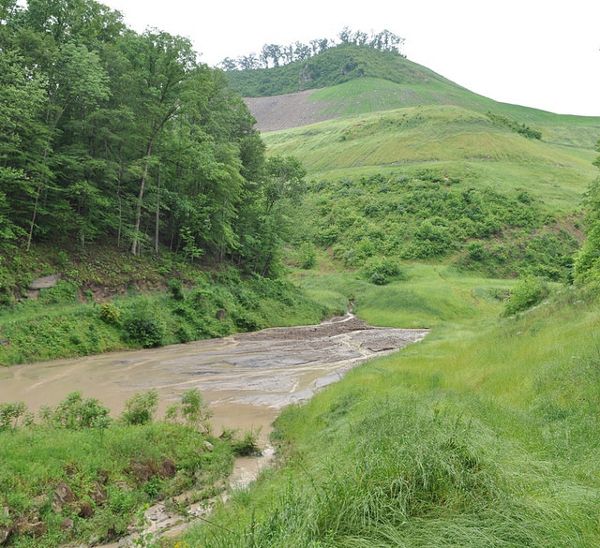 The notice of intent to sue says the violations are even more extensive this time and that the agency continues to be lax. It charges that the first quarter of 2014, 48 percent of the reports filed by Frasure Creek contained data that the company had already submitted for previous monitoring periods and that this time, they changed not only the dates but in some cases the pollution figures themselves, lowering them to within acceptable limits.

“Copy and paste is not compliance,” said Eric Chance, a water quality specialist with Appalachian Voices. “The fact that Frasure Creek continued to flout the law to this extent, even after being caught before, shows it has no regard for the people and communities they are impacting. Equally disturbing is the failure of state officials to act to stop the obvious violations. We’re not sure state officials even look at the quarterly reports.”

“They aren’t afraid of getting caught because the consequences are extremely low,” said Chance. “The cabinet’s settlements with Frasure Creek are so weak that they don’t discourage this type of false reporting.”