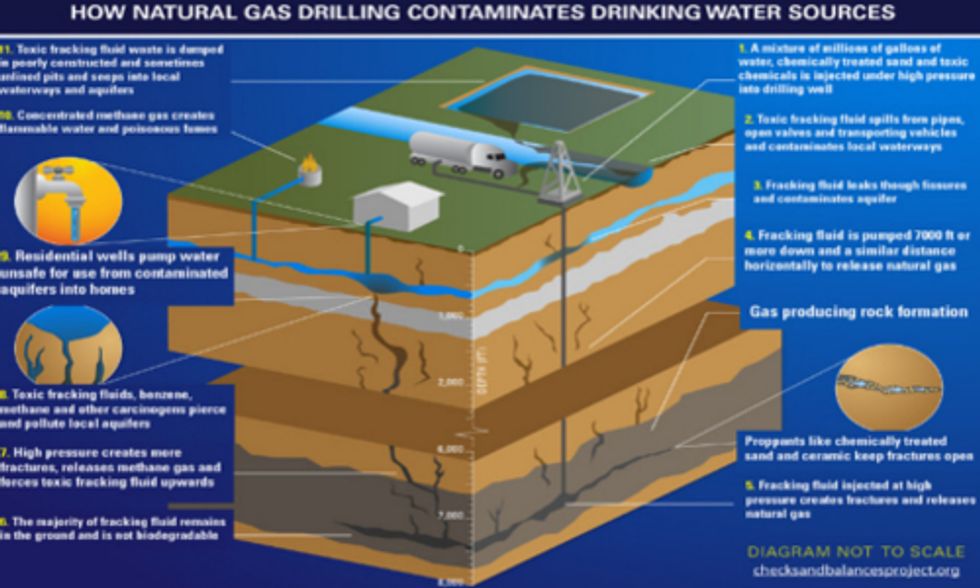 Two environmental watchdog groups have sued Ohio Governor John Kasich and the Ohio Department of Natural Resources (ODNR), charging that they illegally approved 23 facilities to handle the handling, storage, processing and recycling of fracking waste, bypassing the official rulemaking process. The lawsuit was filed by the Fresh Water Accountability Project and Food & Water Water Watch in the Franklin County court.

Is Ohio protecting the health of citizens and the drinking water supply from the toxic chemicals found in fracking waste or is it catering to fracking operators? Image credit: Athens County Fracking Action Network

The suit says that ODNR skirted the formal process, including a legally required public comment period. No regulations have been made available to the public to comment on. The Ohio-based Fresh Water Accountability Project has already asked the ODNR, Governor Kasich and the U.S. Environmental Protection Agency to step in and stop the building and operation of frack waste facilities until the proper procedures are followed. But given Ohio's track record on friendliness toward fracking operators and the governor's own track record of anti-environmental policies, secrecy and failure to listen to opinions that diverge from his own, a lawsuit may have been the only way to go.

“It truly is unfortunate that the only remedy that can now be sought is through the courts once again,” said Lea Harper, managing director of the Fresh Water Accountability Project.

“I do not know what it takes to get our governing bodies to take action to protect Ohio’s environmental and economic future. These facilities are an imminent threat to public health. Once the fracking boom becomes a bust, it will be the Ohio taxpayer that pays the price for clean-up and health costs. We are doing everything we can to avoid that. We are also appealing to the state legislature to intervene without much luck. It is disheartening to see that in order to get our politicians and regulators to take us seriously in Ohio, it takes a lawsuit to stand out against the corporate monetary influence from the fracking industry.”

The legislature's own overwhelming Republican tilt, backing by big corporate money and penchant for haste and secrecy may make that appeal even less fruitful than an appeal to the governor.

With most of the eastern half of the state sitting on the gas-rich Utica and Marcellus shale formations, Ohio has plenty of fracking operators—and fracking waste—of its own. But it has also become a dumping ground for waste from nearby states such as the heavily fracked Pennsylvania, which has much stricter rules about how the chemical-laden water used in the process of extracting the natural gas from shale formations can be disposed of. As a result, Pennsylvania has fewer than a dozen injection wells to dispose of the waste underground while Ohio has hundreds.

The Government Accountability Office (GAO) found in a report released in September that Ohio had the weakest regulatory oversight of fracking waste disposal of eight states. It was the only one of the eight it looked at that did not require disclosure of the chemicals in the waste before getting a permit to dispose of it.

This year alone, more than 15 million barrels of liquid fracking waste have been dumped in the state, with plans to send more into the state by barge on the Ohio River. Fracking waste is classified as non-hazardous, but environmental and health organizations say that the undisclosed chemicals and sometimes even radioactivity in the waste is dangerous to human health and could potentially contaminate water supplies.

“The ODNR has unlawfully moved forward to approve these facilities without the input of the public, which these rules are intended to protect in the first place,” said Alison Auciello, Ohio-based organizer for Food & Water Watch. “For loosely regulated frack waste processing and dumping to be allowed on such a huge scale spells disaster for Ohio. If the state is requiring sampling to prove that the waste isn’t above established thresholds for radioactive waste dumping, then why can’t the public obtain those samples? It is a sad commentary on our legislature and regulatory bodies that it takes a lawsuit for the citizens of the state to protect themselves.”

The lawsuit asks that the court issue a Declaratory Action forcing the ODNR to implement necessary regulations before the facilities are allowed to operate.